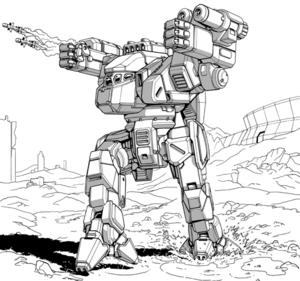 Scout is a battlefield role performed by certain models of 'Mechs and ground vehicles. They are primarily defined as fast, lightly armed, and lightly armored and serve in a reconnaissance function.[1][2][3]

Scouts operate in the dangerous role of reconnaissance for the main force, utilizing their considerable speed advantage to complete the intelligence mission and avoid hostile weapons fire. Generally not used at the lowest lance levels, but reserved for larger tactical formations, they may also be sent on other specific-criteria missions. When speed is of the essence or when the enemy is supported primarily by light and fast 'Mechs, the scout may be the best option.[1]

Though known for both their light armor and weaponry, it is considered reckless to disregard the scout. Due to their high speed, other 'Mechs find them hard to target, which is often compounded by the (scout BattleMech's) common ability to jump. Combine those two factors with heavy cover—the preferred method of approach by a scout—and the unit has a better-than-fair opportunity to strike a target in its weakest points. Scouts often team up with medium and heavy 'Mechs that can provide covering fire support and add the increased threat of a more 'dangerous' opponent, often diverting attention away from the scout itself. This inattention may allow the scout the opportunity to attack from the rear.[1]

A scout's mobility is a defining feature for the role, trending to smaller units with the bare minimum armaments and light armor. Proper use of a scout element has it avoiding direct combat engagement, unless employed in a swarm. They are often equipped with advanced electronics that lengthen their sensor range and detract from that of the enemy's. Aside from pure reconnaissance, they also serve as spotters and light support for other units. Scouts are generally represented by light 'Mechs, ProtoMechs, hovercraft, and VTOLs.[2][3][4]

In Alpha Strike, a unit is identified as a Scout when it meets the following standards[2][3]:
Speed: Fast (Jumping, Wing-in-Ground-Effect, and VTOL modes enhance the role)
Armor: Light
Range: Short
Special: no requirements, but the recon ability and electronic warfare systems, including active probes and ECM, enhance the role