Shelly Brubaker was an officer in the Wolf's Dragoons mercenary command who eventually took command of Delta Regiment.

Shelly Brubaker was born into Wolf's Dragoons, likely the daughter of personnel who themselves had been born on the Clan Homeworlds. Originally joining the Dragoons' motorized infantry, Brubaker distinguished herself helping to lead Delta Regiment's orderly withdrawal from the Draconis Combine world of Murchison in 3038 after a failed raid. She then began MechWarrior training, testing out as a Lance Corporal in 3046 upon Delta's reactivation, this time with the benefit of training by Natasha Kerensky.[1] She progressed through the ranks rapidly, earning a fearsome reputation on the battlefield within her unit.[2]

Brubaker served in Delta with distinction, fighting with her unit and alongside the rest of the Dragoons in the Battle of Luthien in 3051 during the Clan Invasion.[3] During the fighting on Luthien, Brubaker ambushed a Clan Smoke Jaguar Star, successfully capturing two Clan OmniMechs.[4]

Delta was on a contract and in combat when the Dragoon Civil War broke out on Outreach in 3054, and Delta's commander, Colonel Bill Paxon, chose not to break contract, knowing the Dragoon reputation must take precedence.[5] When the conflict ended with Jaime Wolf restored to command, Wolf and new General Maeve Wolf instituted a series of reforms to the Dragoon philosophy, aimed at establishing a new distinct identity that combined Clan and Inner Sphere ways. To that end, Brubaker successfully challenged Paxon to a Trial of Position for command of the regiment.[1][4] Paxon, in adherence to the new doctrine, then challenged to serve as Brubaker's aide and second-in-command so that Delta would continue to benefit from his experience.[4]

Brubaker skillfully reorganized Delta, moving personnel around and forming a more efficient fighting unit.[1] She also incorporated new assets now available to the Dragoons, including OmniMechs, Elementals, and other Clan weapons, as well as more conventional assets such as aerospace fighters.[4]

In early 3058, Clan Jade Falcon, in order to help build experience for their younger warriors after the Refusal War, began a major campaign into the Lyran Alliance. The LAAF forces were easily brushed aside on every world the Falcons struck as the Clan cut deep into the Alliance. Tormano Liao and Nondi Steiner, top aides to Archon Katherine Steiner-Davion, quickly deduced that the Falcons' ultimate target was Coventry, an important province capital and critical industrial world. Realizing they did not have sufficient forces on hand to resist losing Coventry, they hired mercenaries to turn the tide. From Wolf's Dragoons, Delta and Gamma Regiments. Along with the 71st Light Horse Regiment of the elite Eridani Light Horse, they would serve as the vanguard of the relief force. In support were the Waco Rangers and the attached Crazy Eights mercenary company. The taskforce would be named the Coventry Expeditionary Force (CEF).[6][7][8] Although Gamma Regiment was considered active at the time, their commander, Colonel Irwin Tyrell, was concerned his recently re-formed regiment were not ready for independent operations. Instead, individual units of the Gammas were assigned to reinforce Delta Regiment.[9] Overall command of the taskforce rested with Brubaker, a tribute to her skill and charisma and the quality of her Dragoons.[1][9] The long history of animosity, however, between the Waco Rangers and the Dragoons repeatedly boiled over during preparations, as Colonel Wayne Rogers persisted in provoking Brubaker with petty insults. Only the presence of Brevet General Ariana Winston of the Light Horse kept matters civil.[8][10]

Arriving on Coventry on April 5, Brubaker and her Dragoons were assigned to destroy the spaceport at Port St. William, which the Falcons intended to use to quickly land more troops. As Delta began its landing, Brubaker, in a bold maneuver, sent a batchall to the Jade Falcons, announcing her intentions to destroy the spaceport with only her First battalion. Star Colonel Creed Mattlov of the 12th Falcon Regulars accepted this challenge. The Falcons allowed Brubaker and her troops to land, and Brubaker soon attacked with First Battalion. The Dragoons quickly destroyed the Falcon pickets, and for fifteen minutes inflicted heavy damage on the spaceport's equipment and supplies before the Falcons responded. For twenty minutes, the two sides engaged in the most brutal fighting of the campaign, the Dragoons and Falcons clashed. When Brubaker called in reinforcements, it freed Mattlov to do the same. The Dragoons eventually withdrew, having successfully inflicted enough damage on the spaceport to render it unusable to the Falcons, with First Battalion taking serious losses in the fighting. For his own part, Mattlov also claimed victory, as Brubaker had been the one to break her bid.[11][12][13]

The Expeditionary Force then linked up with the remnants of the 10th Skye Rangers, the Coventry militia and the Coventry Military Academy training cadre.[14] Brubaker was impressed with Hauptmann Caradoc Trevena, who was by that time the Tenth Rangers' First Battalion acting commanding officer and had effectively conducted the guerrilla war against the Falcons. She and Colonel Tyrell defended Trevena when Rogers dismissed him as a mere recon company commander. She would soon begin a relationship with Trevena.[8]

The Lyran and mercenary forces soon agreed on a plan to launch a three-pronged attack against the Falcons at Port St. William. The Dragoons and Eridani Light Horse would attack directly, allowing their other forces to attack from the flanks. The Falcons were able to discern the strategy, however, and ambushed the Waco Rangers' column. Brubaker and Delta Regiment were forced to abandon their attack to launch a rescue operation, though not before the Rangers lost 85 percent of their 'Mechs and Colonel Rogers was captured.[15][16][17][18][6] With the losses, the CEF was forced to abandon their assault, falling back to Lietnerton. For the next several weeks, the Falcons would launch probing attacks against the CEF, which at this point was running low on supplies and badly outnumbered. On May 8th, the Falcons launched an all-out attack, which was only narrowly pushed back, inflicting more losses on the beleaguered CEF. Another assault on the Ninth was only foiled when Light Horse artillery provided far more accurate fire support than their Clan counterparts. An attempted preemptive attack by the CEF on the ninth failed when a Jade Falcon OmniFighter patrol detected Dragoon aerospace assets preparing for a bombing run.[15]

Two weeks later on May 30th and on the advice of Hauptmann Trevena, the CEF sent a small strike force through underground mining tunnels to the town of Whitting, where the Falcons had based their rear command. Brubaker was in command with the remains of Delta Regiment and Trevena's recon company. The operation was a resounding success as the CEF captured a wealth of information on the Falcons' plans, as well as several prisoners including Star Colonel Arimas Malthus.[19]

The CEF was preparing to split up into small guerrilla bands when relief finally came in the form of an unprecedented multinational taskforce commanded by Prince Victor Steiner-Davion and Precentor Martial Anastasius Focht. On the advice of Clan Wolf-in-Exile warrior Ragnar, Prince Victor and the Coalition requested and were granted safcon to land and link up with the CEF. Rather than forcing a clash that would utterly devastate both Clan and Inner Sphere forces, Victor shrewdly offered Khan Marthe Pryde the right of hegira, an honorable withdrawal under Clan law. Pryde, faced with the prospect of attacks by Clan Wolf on the other side of their Occupation Zone, accepted. All prisoners were exchanged, and the long campaign was finally concluded.[20]

Her charisma and dedication saw Delta through the meat grinder that was Coventry.[1] 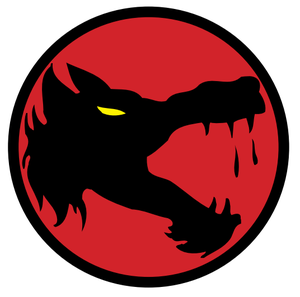 Brubaker spent several years bringing Delta Regiment up to full strength, continuing to apply the Dragoons' new doctrine. This included permanently attaching a reinforced heavy armor regiment, the 75th Dragoons Heavy Armor, formerly part of the Dragoons' Home Guard command. By 3067, Delta had accepted a contract with the Draconis Combine, garrisoning Kiesen along the Ghost Bear Dominion border while Alpha Brigade defended nearby Najha. By this point, all of Delta's 'Mechs had been upgraded with Clan tech while more than half were OmniMechs.[21][22]

On October 15, 3067, rogue mercenaries led by Colonel Wayne Waco launched a surprise attack on Harlech City on Outreach at the beginning of the Jihad. During the fighting, Epsilon Regiment and the Home Guard ground forces were effectively destroyed, while Zeta Battalion, the Wolf Spider Battalion and Beta Regiment all took heavy damage before eliminating the rogue mercenaries. Jaime Wolf himself was killed while slaying Wayne Waco. Wolfnet intelligence soon concluded the attacks had been sponsored by the Word of Blake in response to Dragoon opposition to the Word in the Chaos March.[23][24] General Maeve Wolf and Alpha Brigade immediately activated their contract termination clause with the Combine while Delta remained in the Combine.[25]

Brubaker and Delta Regiment missed the further horrors on Outreach, as the devastated Dragoons retreated to Arc-Royal.[26] The Jihad had a terrible impact on the reputations of mercenaries throughout the Inner Sphere, and by January 3068, Delta Regiment was facing public protests from the civilian population on Kiesen.[27] Delta was still based on Kiesen as of October, 3068.[28]

In early 3070, Delta was reassigned to Buckminster by the DCMS command. A Word of Blake taskforce soon attacked, consisting of the Blakists' 28th Division and 45th Shadow Divisions, along with two supporting WarShips. The WDWS Mars, a Vincent-class WarShip supporting Delta Regiment, was destroyed in orbit, allowing the ground forces to attack the Dragoons on planet. The sworn enemies engaged each other in an absolutely vicious battle, the Deltas were successful in driving off their enemies, though they were completely shattered as a unit. They were forced to join their fellow Dragoons on Arc-Royal, and were effectively disbanded.[29][30] Unsubstantiated reports later indicated that the entire incident on Buckminster was manipulated by the Kokuryu-kai, and that ISF Director Shakir Jerrar and Gunji-no-Kanrei Kiyomori Minamoto arranged it in revenge for past transgressions by the Dragoons against the Combine.[31]

A prototypical Dragoon officer, Brubaker was tough, capable and fiercely loyal to her troops. She could be ruthless when necessary, but was more defined by a cheerful optimism that was rather unusual in a mercenary officer.[2] She was considered attractive and even gregarious, and her charisma could smooth over many problems. Training, determination and a killer instinct had earned her respect as one of the finest MechWarriors in the Dragoons.[1] In battle, Brubaker was described as deliberate and mechanical, coldly fighting as a "sniper", methodically shooting down her enemies.[2] Brubaker's command company excelled in close-range combat, allowing the Colonel herself to snipe at enemies from long-range with her powerful guns.[4] 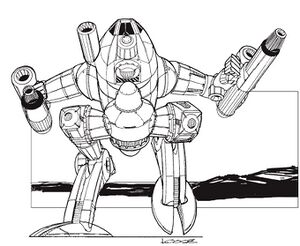 Brubaker piloted a modified Nightstar during the Coventry campaign, a machine modified with Clan tech. The 'Mech was an ideal choice for a warrior of her capabilities and talent, with almost incomparable hard-hitting long-range firepower. Two Clan Gauss rifles, three Clan Large Pulse Lasers and a Clan Extended Range Small Laser could cripple a heavy 'Mech in a single salvo and outright destroy many smaller machines.[32]

Under the MechWarrior: The BattleTech Role-Playing Game, Second Edition rules, Brubaker has the Combat Sense and Extra Edge advantages, as well as an Edge score of 5.[2] Under standard BattleTech rules, Brubaker had Piloting and Gunnery scores of 3 at the time of the Battle of Coventry.[17][33]

Under the MechWarrior, Third Edition rules, Brubaker possessed the Attractive, Gregarious and Combat Sense traits. She had a +1 level Positive Reputation trait among the Dragoons, and claimed the Sniper and Range Master (Long Range) special abilities.[1]