Sir Roger magazine was a spanish magazine published between 1993 and 1994 that in their first issue published an article on BattleTech. Each issue consisted in 1200 copies. 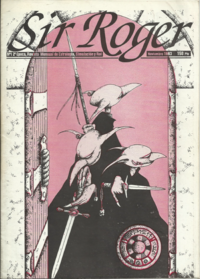 According to the magazine's content, during mining activities on a non-canonical planet (Imphal III) during 3026, House Davion found a battered JumpShip and attached to it an unspecified DropShip full of 'Mech supplies. As House Davion was preparing for the 4th Succession War, Hanse Davion was not interested in having thousands of tons of space parts, he wanted Mechs, so he instructed NAIS to work with the pieces and prepare prototypes of several 'Mechs.

The Barbarian was discarded for several issues on its stability. The magazine provides statistics and images for the three remaining 'Mechs, though their equipment does not match the images (The Paladin has what looks like a Rifleman arm but only the AC/5 on it), among other inconsistencies.

Also, a 4-'Mech battle agaist House Kurita 'Mechs is presented as the test of the 'Mechs.