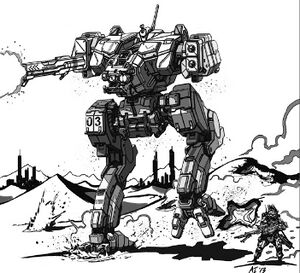 Gùn in the sniper unit role

Sniper is a battlefield role performed by certain models of 'Mechs, as well as other ground units. primarily those that are relatively slow and armed with long-range, direct-fire weaponry.[1][2]

Snipers are BattleMechs associated with a specific fire-support mission on the battlefield, as characterized by the powerful long-range, direct-fire primary weapons, and operate as the direct-fire counterpart to missile boats. Though slow compared to the faster skirmishers and strikers, the speed for these large platforms is not as much as a factor when used at a distance that protects them from the majority of counter-fire; point-in-fact: too move movement detracts from their ability to get the munitions on the specified target. Though this use of a protected position (also known as a "sniper's nest") is shared by the missile boats, the two are differentiated by the latter's use of indirect fire weaponry. Since the sniper cannot attack from a completely hidden location, it usually fires from woodlands or other partial cover. It is common to have snipers protected from fast enemy units by strikers or brawlers, though stealth and distance are their greatest advantages. Almost any non-infantry unit can serve in the sniper role, though BattleMechs and heavy tanks are the ideal option.[1][2][3]

In Alpha Strike, a unit is identified as a Sniper when it meets the following standards[2]:
Speed: Any
Armor: Any
Range: Long (non-LRM based weaponry)
Special: no requirements