Stefan Ukris Amaris befriended and masterfully manipulated Richard Cameron, the young and vulnerable First Lord of the Star League. Betraying Richard, Stefan assassinated him and usurped his throne. He was later defeated and executed by Aleksandr Kerensky and entered history as Stefan the Usurper.[1] 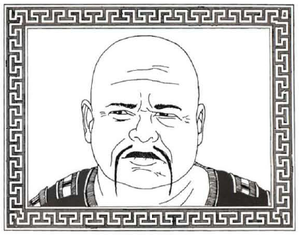 Stefan Ukris Amaris was born on August 28, 2717, in the Rim Worlds Republic. Even as a little boy, Stefan was indoctrinated in the politics of the Rim Worlds and the significance of the deeds of his ancestors, so that one day he would be able to fulfill his destiny, as can be seen in some of his earliest diary entries.[4]

As Amaris grew into adulthood, his keen grasp of Star League politics became evident. His diary entries began to show that he was paying close attention to the game and the players of the political realm — particularly the aide of the then current Commanding General of the SLDF, one Aleksandr Kerensky. Little did Amaris know that he was keeping an eye upon the man who one day would become his executioner.[5]

Shortly after Richard Cameron became First Lord of the Star League in 2751, Stefan realized that young Richard was isolated, starving for friendship and attention, and therefore extremely vulnerable.

In 2753, Stefan began to cultivate Richard's trust by sending him gifts and through simple flattery; he even renamed the capital of the Rim Worlds Republic, Apollo as Terra Prime to "honor Richard".

Through these means and by ostensibly supporting Richard's naïve political initiatives like Executive Order 156 Stefan became his closest friend and confidant.

He persuaded Richard to remove all SLDF forces from the Rim Worlds Republic and to hand their local bases and fortresses over to the Rim Worlds Republic Military. While the Houses started skirmishing on the verge of Richard's majority, Stefan continued to expand his influence over Richard. In an act of revenge for slights cooked up by Amaris, Richard ordered all House armed forces to be disbanded. The Lords protested loudly, and even Kerensky, commander of the Star League Defense Force, stated that the order was illegal.

Furious, and convinced by Amaris that Kerensky and the House Lords were against him, Richard withdrew his order, becoming increasingly embittered. 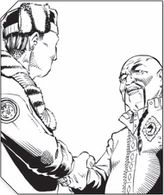 Stefan Amaris meets Isleen Malvena from the Taurian Concordat, some time before the Periphery rebellion.

Richard's Taxation Edict of 2763 further increased the financial burden of the Periphery, and caused great civil unrest. Faced with popular refusal and defiance, he ordered General Kerensky to the Periphery, which quickly erupted in open rebellion. Unknown to all, Amaris was behind everything.

As more and more of the SLDF forces were required to fight the war in the Periphery, Stefan offered the services of his Rim Worlds forces. Despite the objections of (?), Richard accepted. A secret agreement between Richard Cameron and Stefan Amaris was signed in 2764; Stefan agreeing to lend his own troops to garrison the bases of the SLDF and to defend the Terran Hegemony if needed.

Following the secession of New Vandenberg and 17 other Periphery worlds in April 2765 an ever-increasing number of SLDF units, including Cameron household units, were sent to the Periphery. By 2766 three-quarters of the Regular Army was deployed along the Periphery.

On Terra, a suspiciously large number of troops from Stefan's household guard replaced the SLDF units sent to New Vandenberg, eventually outnumbering the remaining SLDF units. All was set and ready for the impending coup d'état.

On December 27 2766, Amaris seized his chance. He presented Richard Cameron with a ceremonial, jewel-encrusted laser pistol in the Star League High Council chamber, Unity City, Terra, and then shot him through the head. At the same time Stefan's troops moved against Terra and the other worlds of the Terran Hegemony. On the first day, 95 of its 103 planets fell to the surprise attack. Amaris renamed the League as the Amaris Empire.

Besides ordering the execution of every man, woman and child with a drop of Cameron blood, Stefan also imprisoned Drago Kurita, the ambassador of the Draconis Combine.[6] Being a grandnephew of Takiro Kurita, the Coordinator of the Draconis Combine, the ambassador and his family became valuable hostages; a means to pressure House Kurita. As proof of the madness and bloodthirstiness of Amaris is the fact that the valuable hostage was executed in the lead-up of the takeover, but he pretended he was alive to ensure the Combine cooperated with him.

As a part of his efforts to legitimize his position, Amaris called for a free election to be held within the Terran Hegemony to elect the Hegemony's new Director-General. The President of the Terran Congress, Count Frederick Oldenhof, served as Director-General Pro Tem in the interval between the death of Richard Cameron and the elections, which were to be held on 28 January 2767. Stefan Amaris was nominated for the position of Director-General on the ballot; two additional nominees originally included their names, Atrisha Kisabaka from Bryant and Somjit Berkhout from Fomalhaut. However, both withdrew from the election prior to ballots being cast, with Berkhout forced to withdraw following an indictment for embezzlement and Kisabaka choosing to withdraw to focus on "family needs" — a result of Amaris having Kisabaka's family rounded up and thrown into a gulag in Africa.[7]

When the election results were published by the Department of Administration, the official report showed an eighty-five percent turnout — a record — with almost seventy percent voting in favor of Stefan Amaris for the post of Director-General. This was in defiance of projections, which predicted a turnout of less than ten percent, and was a direct result of vote rigging by forces and agents loyal to Amaris; examples of voter fraud included Amaris' agents turning in massive, favorable vote counts from worlds like New Dallas and Sabik, which had been cut off from the HPG network. The results were posted by Hegemony governors on the 30th of January, unanimously declaring Amaris Director-General; less than eighty governors were actually alive or able to return their votes, and many did so under duress, but the result stood.[7]

In January 2767, Amaris proclaimed himself emperor. News of the coup did not reach general Aleksandr Kerensky until May of 2767 when Amaris reestablished communications and tried to gain the general's support, offering him power second only to his own if he would "become [his] sword arm and help [him] impress [his] word and wisdom upon the other realms."[8]

However, General Kerensky was neither foolish, greedy or afraid; he declared a ceasefire with all other Periphery realms and declared Stefan Amaris a usurper, starting the 13-year Amaris Civil War.

Under Kerensky's command, the Star League Defense Force overran the Stefan's native Rim Worlds Republic in August 2767 and regrouped. Both Amaris and Kerensky asked the Council Lords for support. While none would officially commit to either side, most of the lords tacitly supported Kerensky while giving no support whatsoever to Amaris.

Takiro Kurita died and his son Minoru became Coordinator. Minoru was bound by a last request of his father: he was to negotiate, to actively court and to covertly assist Stephan Amaris during the Amaris-Kerensky Civil War in order to safeguard his imprisoned relatives. Unable to act against Amaris, Minoru denied Kerensky passage through the Draconis Combine.

A cornered Amaris realized that an understanding between him and Kerensky was impossible. He fulfilled his threat and entrenched his forces upon the planets of the Terran Hegemony.

The civil war finally climaxed with the liberation of Terra on September 3, 2779. Drago Kurita and his family were killed around this time.[6]

On September 30, Kerensky captured Amaris, who ordered the surrender of all his remaining troops. The civil war was finally over.

Charged with high treason and crimes against humanity; Amaris, his family and his closest aides were found guilty after the barest sham of a trial,[9] and by direct order of General Kerensky, were summarily executed by SLDF troops in November 2779.

After Amaris' execution, Kerensky ordered his remains preserved aboard the McKenna's Pride as he debated their fate. Knowing that a formal burial site could become a place of pilgrimage for those followers committed to the Usurper's cause, Kerensky also equally recognized that to bury them in an unmarked grave or incinerate and scatter them into space would only give support to those who believed Amaris had escaped and was plotting revenge. In one of Kerensky's last acts before leaving the Inner Sphere forever, the General ultimately chose to follow the suggestion of an anonymous soldier among his command staff and donate Amaris' body to the University of New Samarkand's medical school, a very public and unglamorous end. Stefan Amaris' cryogenically preserved remains would serve as a learning tool for several generations of Combine doctors until 2863 when he was buried in the university's cemetery when it could no longer support the now LosTech cryogenic chambers.[10][11]

Amaris' death was the beginning of the end for the Rim Worlds Republic and for the influence the Periphery powers had managed to gain during the Star League Age. The Rim Worlds Republic would later devolve into the Bandit Kingdoms, and the other Periphery powers would remain distant isolated backwaters, vilified even further for the conduct of one overly ambitious madman.

Though Kerensky's troops hunted down anybody in the Rim Worlds Republic with the name Amaris, maternal cousins with different names were overlooked. Though additional research would claim to prove no conclusive links between Amaris and anyone living, Shera Moray, one of Amaris' concubines, was pregnant with Stefan's child and had fled sometime before the end.[3]

The original Rim Worlds Republic wooden Throne was preserved in a museum on Bordon until the year 3029, when stolen by Snord's Irregulars, who exhibited it in their museum on Clinton as late as 3064.