Stephan Cage (born August 3rd 2754[1] - died 28??) was the founder and first Khan of Clan Ice Hellion. A tough and rugged warrior who would not shy away from making hard decisions - for right or wrong - Khan Cage also had a strong compassionate side that would lead him to perform tireless service at certain times throughout his life on behalf of people in great need, both on the battlefield and on a humanitarian level. Said to be a motivational, fatherly figure to those in his Clan - warriors or lower caste citizens alike - he equally loathed self-interested individuals and those who did not work with the pack.[2] He would go on to wage an Ice Hellion civil war against corruption in his "family" before stepping down in favor of the next generation.

Though records on the civilian life of Stephan Cage are rather sparse, it is known that he was born in the Lyran Commonwealth. He grew up watching the news nets, seeing daily reports about the atrocities committed in the Terran Hegemony by Stefan Amaris and his Rim Worlds Republic forces. The campaign being waged against The Usurper by General Aleksandr Kerensky would inspire him to enlist in the Star League Defense Force.[1]

As a MechWarrior in the SLDF’s 200th Dragoons Regiment, Stephan Cage would rise to the rank of Major during the long Amaris Civil War. A battalion commander, he would be the regiment’s commander during the last 16 months of fighting. Though his unit was primarily for reconnaissance purposes, he had a tactical gift for using his forces in offensive roles.[3] Stephan Cage and his troops would be major players in the rebuilding process during the years between the Liberation of Terra and The Exodus, helping to try and heal the seemingly endless scars of the war. When General Kerensky gave his orders for the willing to depart with him into the Deep Periphery, Stephan Cage and his command would choose to leave known space with their commander.[1]

After settling on the Pentagon Worlds and the subsequent draw-down of the SLDF ranks, Stephan Cage would command a regiment of the 146th Royal BattleMech Division for several years. At some point prior to the Pentagon Civil War, he accepted the position of commander of the new colony world of Hector, deep in the Kerensky Cluster. A harsh world of ice and snow that is home to a swift and vicious native predator called the ice hellion,[3] Cage, along with with his small band of troops and colonists, would jump wholeheartedly into the tremendous effort of building a thriving colony.[1] 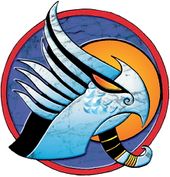 The Clans and Operation KLONDIKE[edit]

After Nicholas Kerensky's Second Exodus, Stephan Cage and his small band of troops would travel to Strana Mechty, reaffirming their support for his ideas about a new society, while acting as liaisons to the colony on Hector. When ilKhan Kerensky announced the formation of Clan Ice Hellion, he named Cage as its first Khan, and assigned five of his original warriors from Hector to be part of the new Clan. Khan Cage would train the Ice Hellions to emulate their totem in almost every way - with speed, instinct and pack-coordination (some would say "pack mentality") valued over other slower tactics or strategies, and often at the cost of Zellbrigen.[1][4]

In 2821, Operation KLONDIKE was launched to reclaim the Pentagon Worlds in the name of the Clans. Ordered to perform recon duty only pre-invasion, Khan Cage would accept his orders grudgingly, knowing that his Clan was capable of much more.[5] But soon enough they would be unleashed. Clan Ice Hellion would be selected for the drop onto Babylon, and would work closely with Clan Cloud Cobra at several points throughout the campaign.

After the initial landings near the proto-state of Camlaan on the continent of Solath, the Hellions and Cobras combined forces to defend the Clan DropShips from a large counter-attack.[6] They moved on to conquer the city of Hope together before splitting up in the area around New Drineshane, a hotbed of rebel activity. The Cobras would occupy the city, while the Ice Hellions scoured the countryside for rebels.

At this point, a massive force led by three different rebel leaders that had been hiding in the city’s sewers emerged, assaulting the vastly outnumbered Cloud Cobra 'Mechs, threatening to annihilate them. Khan Cage ordered his Hellions back to assist the Cobras, making a 100 kilometer journey in scarcely over an hour, smashing the rebel flanks and routing the enemy, an action that saved the lives and machines of the remaining Cloud Cobra warriors.[7]

After the conquest of the continent of Solath, the Hellions directed their operations to the continent of Corsen. As they were fighting to bring the area around the Shoshi’i Seas under Clan control, a powerful volcanic eruption ripped the Shoshi Islands apart, causing earthquakes and tsunamis to devastate the area for hundreds of miles around. The Cloud Cobras performed search and rescue and other relief missions to assist the bewildered citizens, while the Ice Hellions--who were wrapped up in the fighting that still raged on Corsen--would still find ways to lend whatever logistical support they could to the operation.

After the fall of Gralen, a strongly fortified proto-state called the Oppenreich was all that remained. An artfully coordinated battle plan that combined the Hellion BattleMech force and the Cobra Aerospace Fighter Stars would topple the Oppenreich by March of 2822. Devised and orchestrated by Khan Cage and saKhan Rafe Kardaan of the Cloud Cobras, it was to be one of the final actions of the Babylon campaign.[8]

In the years directly after Operation Klondike, Khan Cage would have his Ice Hellions fight a series of successful Trials to secure resources, but also to test his combat philosophy against true warriors. Khan Cage led them in perfecting flexible tactics that involved speed as well as teamwork.[5] Successful beyond the expectations of the other Khans, Ice Hellion would soon become a target of other Clans’ anger, fending off increasing raids from increasing amounts of enemies who had developed effective counter-tactics to fend off the Ice Hellion blitzkrieg.[4]

While his Ice Hellions were being pummeled from all sides by attacking Clans, Khan Cage noticed with wonder and alarm that his saKhan Lucius Moore had an uncanny string of victories going. At first thinking it might be a product of superior tactics, Khan Cage investigated further. It was not be long before the truth was uncovered: saKhan Moore had been ordering his troops to take performance-enhancing drugs. Interpreting this as an insult to the Clan eugenics program, and no doubt thinking of the example of how the Not-Named Clan had been dealt with, Khan Cage took the matter to the Grand Council, exposing the problem himself, then asking the assembled Khans that he himself be allowed the right to cleanse his Clan of the taint.[5]

The Council would indeed grant his request. Thus began what was essentially a civil war that would see the Ice Hellions’ effective strength fall by an estimated 50%[5] to 60%[4] before it eventually ended with Khan Cage’s victory over his saKhan and the forces loyal to him.

In the aftermath of the struggle, Khan Stephan Cage stepped down to allow the next generation to take over. He was succeeded as Khan by Mia Taney, his protege, who would guide the Hellions out of the ashes of civil war.[5]

"In turn they tested each Clan namesake
In trial against the Ice Hellion's mettle.
Each chased the Ice Hellion, hunting it down.
All failed to match the predator's speed and grace.
Khan Cage smiled and said, "And that is how we shall be."

The warriors of Clan Ice Hellion would continue striving to live up to the ideals set forth by Khan Stephan Cage for centuries to come. The Hellion's Fury campaign that took place right after their failure to secure an Inner Sphere invasion corridor is a prime example of the type of Stephan Cage-inspired attack that the Hellions live to execute.