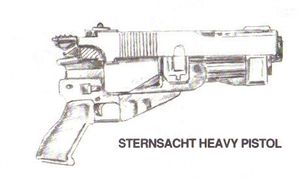 The Sternsnacht Claymore Heavy Pistol is a slug-throwing pistol with unusual beginnings. Build by Sternsnacht, the weapon first became popular during the 2880s thanks to Tag Burton, a famous Solaris VII duelist. In what were almost certainly staged scenes, Tag would jump out of his BattleMech's cockpit and use his "Sternsnacht" hand cannon to deliver the final killing blow to an opponent's 'Mech, much to the crowd's delight. As his legend spread throughout the Inner Sphere, people began to clamor for the weapon most associated with their hero.[1]

Unfortunately the weapon, much like the performance associated with it, was something of a sham. The Sternsnacht corporation had custom-built the weapon for Tag by modifying a hunting rifle to function as a pistol. Not wanting to let a good opportunity go to waste, especially with their competition offering copies of their own, Sternsnacht released what became known as the Claymore heavy pistol into the market. These pistols were slightly more useful than the one Tag carried around, but were still massive weapons whose large bullets limited magazine size and suffered from intense recoil and muzzle flash. Stensnacht flooded the market with their new pistols, and an eager public bought them up. Though Tag's popularity and that of his gun have faded, the weapon can still be found in the hands of many of his enthusiastic fans.[1][2]