Formed in 2086 and encompassing some 80% of Terra's population, despite the endless debates from the "haves and have nots", the Terran Alliance poured considerable funding into scientific research that ultimate bore fruit in the development of practical and affordable fusion reactors and ultimately the Deimos Project, the successful development of the Kearny-Fuchida Drive allowing FTL travel to the stars.[1] However the Alliance was ill-prepared for its sudden transformation into an interstellar nation, with frequent tensions between it and the colonies with regards authority versus allegiance to the power of the motherworld.

The struggle eventually resulted in the Alliance Parliament dividing into two political parties, the Expansionists and the Liberals. Swept into power on the back of the discovery of the KF Drive and remaining in power ever since, the Expansionist Party strongly believed in the authority of the State over everyone, be they on Terra or colonies light years away. Formed from those who initially opposed the huge economic drain of the Deimos Project and further sums spent on the colonies, the Liberal Party supposedly believed in personal freedoms were heavily opposed to extensive government interference. Despite their wildly different view points, both became increasingly militant with no qualms about using force to achieve their aims.

Seeking some advantage against the Expansionist to regain power, the Liberal Party got its opportunity in 2236 when a coalition of colonies at the far edge of Human expansion declared their independence from the Alliance, launching what would later be known as the Outer Reaches Rebellion. The Expansionists wanted to severely punish the coalition, dispatching the Alliance Global Militia's Colonial Marines to reestablish the Alliance's dominance. Confident the Marines could handle a few disgruntled rebels, despite the fact the AGM was little more than a police force, the Expansionists staked all their credibility on their success, only for the Marines to return 18 months later in disgrace and defeat, their superior technology no match for superior numbers of the colonists.

The Liberals took advantage of this catastrophic foreign policy failure to challenge the Expansionists right to rule, quickly gaining support to form a coalition with other dissident groups to take power. While most people on Terra at the time had little intention of leaving for the colonies, the Liberal Party's unveiling of a secret Expansionist government memo to severely restrict emigration to them was seen as a draconian imposition on their personal rights, giving the Liberals massive support that allowed them to sweep the elections of 2237.[2]

Driven either by a sense of righteousness akin to the abolition of slavery or a belief that the colonies should solely look after themselves, one of the triumphant Liberal Party's first changes of policy upon winning government was the Demarcation Declaration, granting independence to all worlds beyond a 30 light year sphere around Terra whether they wanted independence or not. Unfortunately while freeing the colonies from the oppressive regulation of the Expansionists, the lack of almost any form of government support and aid resulted in increasing suffering on the frontier.[2]

As more and more Terrans grew sympathetic to their plight, the Liberal government's obsession with the massively expensive transformation and terraforming of Terra, Mars and Venus increasingly put them out of favor with the public. The final straw came when it was learned that one colony had starved to the death because of lack of food supplies, triggering extensive rioting across Terra. The Expansionists took advantage of this growing discontent, fanning the flames and soon attracting enough public support to regain government in the general elections of 2242.

Each party would effectively trade government like this for the next six decades, as the incumbent would invariably lose support due to their actions, the public becoming more and more apathetic. The situation was made even worse by rampant tampering of the electronic voting system the Alliance used, so that even those who did vote conceded their choice was meaningless, the real control of the election results being hammered out in corrupt backroom deals. With seemingly no break on the their actions, the conflict between both parties grew far beyond words and escalated to the point of physical fighting and rumors of assassination.

Enabled by the open-door emigration polices of the Liberal Party, the instability on Terra was so great than huge numbers of people chose to flee the chaos and misery entirely, trigging the massive flood of emigration from Terra that would be known as the Exodus. But the massive emigration to and the supply needs of the colonies strained the large Terran based conglomerates to breaking point, triggering increasing economic turmoil. Scientific research, the hallmark of the Terran Alliance, ground to a halt between the focus of Terran industry on supplying the massive colonial demands, the desperate fight for survival on the colonies themselves and factionalism between Liberal and Expansionist sponsored projects.

The ceaseless political warfare between the Liberals and Expansionists took its toll on Alliance society as rules and regulations changed wildly with disturbing regularity, with social welfare and the economy breaking down.[3] One area seemingly aloof from the instability was the Alliance Global Militia. After its humiliation in the Outer Reaches Rebellion, the AGM took great pains to stay strictly neutral, merely asking for enough financing to gradually upgrade their forces. Rather than risk alienating a powerful potential ally, both parties agreed and the AGM steadily grew back into a true military once more. It was during this time that at the direction of firebrand Admiral James McKenna that the AGM built the first true interstellar navy, with McKenna's pet project the TAS Dreadnought as its flagship.[4] 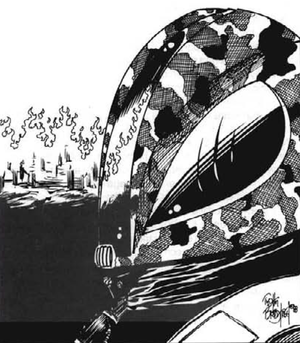 As the political situation grew ever more unstable, in 2310 a new political party emerged claiming to be the voice of the forgotten, the People's Independence Party, attracting a considerable following among the previously apathetic population.

But despite its public persona, in many respects the PIP was just as bad as the Liberals and Expansionists, its leader Grant Zoli driven more by the prospect of the personal wealth to be gained through political power than a desire to make a difference. The PIP's strong showing in the 2310 elections made it a major force and potential deciding factory in the Alliance-wide Parliamentary elections of 2314, prompting both Liberals and Expansionists as Zoli expected to court him with money and power to garner his support. Hoping to drive their offers even higher, Zoli and his cronies remained strictly noncommital until just before the election, with Zoli pledging the PIP to the Expansionists, until he had a change of heart (or possible a better offer) and shifted his party's allegiance to the Liberals a month later. Zoli's shifting allegiances proved too much for someone, with the PIP's leader found dead in his mansion on September 5th 2314, barely a month before the elections.

News of his death created an immediate uproar with both the Liberal and Expansionist parties blaming the other for the crime, while the slain Zoli's more zealous supporters enacted a bloody wave of assassinations against both parties. The Parliament invoked martial law on Terra and ordered the AGM put down the rebellion in New Zealand, home of PIP. At this stage the Liberal Party produced evidence it claimed proved Grant Zoli had murdered by order of the Expansionist Party, and while it was later proven to be false, it served as trigger point for escalation of the conflict.

On September 30th 2314 the personal guards of the leading Liberal Party boss drove across Zurich and stormed the headquarters of the Expansionist Party, killing everyone inside. The Expansionists of course retaliated, with battles between thugs from both parties spreading across Terra as each faction unveiled their own secretly trained detachments of fanatical soldiers, small scale battles growing into an outright shooting war. Though both sides mainly targeted the other, many thousands of civilians were killed in the crossfire. Both sides swayed a few units of the AGM to join them, but bulk continued to remain politically neutral.[5]

Watching with increasing dismay, James McKenna successfully convinced the ground forces of the AGM to step in to try and stem the tide, the Battle of Zurich and the Battle of Bangkok two of their most heroic efforts.[5] But as the overall conflict continued and threatened to spread to the colonies closest to Terra, McKenna recalled all Alliance WarShips and Marine troop carriers to Mars as he prepared his course of action. On June 2nd 2315 McKenna brought the TAS Dreadnought into orbit above Terra, where he had his ship’s gunner target and destroy two uninhabited islands, Strand Rock near Scotland and a similar island near Australia, using the ship’s Capital weaponry. These orbital strikes shocked the combatants on both sides of the fighting, causing combat to temporarily stop. He then made a worldwide broadcast from his Warship to the people of the planet.

In his famous ultimatum, McKenna passionately stated his case that it was "Time for Change", for the ongoing political fighting and corruption to end, asking for the support of the general population to form an new government and headed by a leader selected but not ruled by the people. The effect of McKenna's words were far-reaching. Almost every AGM unit that had been fighting one side or the other returned to their barracks. In many cities, citizens poured into the streets in support of Admiral McKenna and his call for a new order. The leaders of the Liberal and Expansionist parties, as well as a few AGM units, refused to surrender, but true to his word, McKenna unleashed the firepower of his ships on exposed targets, deploying the Colonial Marines against those who tried to hide from bombardment in cities.[6]

As the dust settled, McKenna issued what would be known as the Hegemony Charter, outlining his new form of government, led by a single decisive head of state, a virtual king. Staging elections in February 2316 to legitimize what had effectively been a military coup, James McKenna was elected as the first Director-General of the Terran Hegemony. The fact that bulk of Terrans would willingly elect one man to rule over them as a virtual dictator, even after McKenna openly announced he would do so "until his death or voluntary retirement", speaks volumes of how tired people were of the Terran Civil War and the political instability that led to it.[7]