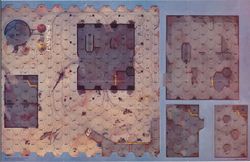 Fleetham Industrial Complex was originally a production facility for shuttlecraft with most of the work carried out by IndustrialMechs. As such, the facility was built on a scale to accommodate them, including floor space, hallways and doors large enough for 'Mechs to move around in. When Irian Technologies acquired the site in the late 28th century, they created a limited partnership called Free Worlds Industries and solicited the help of other major corporations to refurbish the factory into a 'Mech fighting arena. The reconstruction was quite simple, reinforcing the existing structure to withstand weapons fire and adding Tri-Vid cameras at various locations, while leaving the abandoned production lines, machinery, and other debris in place. The Factory opened up to rave reviews, with the distressed, metallic terrain favoring fast, nimble 'Mechs while also limiting sensor systems. As time went on the Factory became even more devastated, both as a result of the matches themselves and by management dumping even more wreckage into the arena, but the matches also became more predictable: either a thrilling, intense duel between two daring MechWarriors which end quickly or a drawn-out and dull affair with both fighters hiding and sniping at each other. In an effort to revamp interest in the area, and to compete against the reconstructed Boreal Reach, new climate controls were added to try and spice up the arena.[1]

The multistorey layout of the Factory is little changed from when shuttlecraft rolled off its assembly lines, with its structure relatively sound and under constant upkeep. The interior of the Factory, however, receives almost no repair work, making the arena as much of an enemy as the opposing 'Mech. Overhead cranes might suddenly come crashing down from above, pits can open up in weakened floors, elevators might stop working at the wrong time, and unexploded ammunition from previous matches can go off unexpectedly. Magnetic disturbances from the wreckage strewn about can also play havoc with 'Mech tracking. Most of the time management will only add even more piles of scrap to the Factory, with some fighters complaining that these "random" droppings happen to put them at a disadvantage to their opponent. After the Fourth Succession War, additional controls were added so that lighting and temperature could be changed suddenly and so liven up a match. Regardless, the Factory tends to favor two types of MechWarriors: active and aggressive warriors, particularly in lightweight and highly agile 'Mechs, and cautious warriors, particularly in heavier, urban combat-dedicated 'Mechs.[1]

During the Jihad, the Montenegro section of Solaris City suffered heavy damage, including the site of the Factory arena. By the mid-3080s, several of the venue’s features, many of which often suffered in routine events, as destroying the arena terrain had long become a valid and popular tactic—fell into such disrepair that they either ceased working entirely or the arena management simply opted to stop replacing them between matches.

After 3084, The Factory’s elevators no longer function. Units may only access the upper levels of the arena through the use of jump jets and similar equipment. Likewise, only units that have jump capability may start in any position located on the upper levels.

From 3084 onwards, the tanks were not repaired being just a junk of debris.

After 3085, the bridge section of The Factory is once again only capable of supporting units weighing 50 tons or less. Each bridge hex has a CF of only 50. More disconcerting is the fact that the low-quality bridge tends to buck under extreme shock.

In the late 3090s, a new management team decided to give The Factory venue a minor boost in the form of newer, more modular features, which included automated coolant bath system, a specialized field munitions reloader, and even a limited selection of handheld weapons. Instead of permanently placing these modules in the arena, the management opted instead to deploy these remotely operated, 'Mech-scale booths on a random basis, based on requests from the fight organizers.[2]

Seating for the Factory is relatively small with a total capacity of 36,000 and is the largest weakness for the arena. General seating for 30,000 cost just 20 C-bills but is cramped and uncomfortable, with only large format high-resolution flatscreens on which to watch the action. The close quarters leads to frequent fighting between fans despite color-coding seats meant to keep them apart. Much more comfortable box seating is available for 75 C-bills and allows the fighting to be watched on closed-circuit tri-vid monitors.[1]