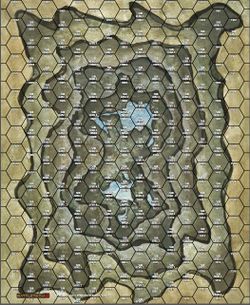 A converted junkyard in the Roland Fields "district" from Solaris City on Solaris VII's Reaches region, the Class V The Mud Pit is a former gravel pit, able to catch the frequent rainfall of the arena, which transforms it into a small lake of mud.[1]

Rana Kafi used her winnings to purchase an abandoned gravel pit in Roland Fields. People thought she made a mistake, but after installing bleachers and lights along the pit's steep banks and declared The Mud Pit open for 'Mech matches. Tourist started to flow and suddenly the same people classified her as a genius. She is reportedly negotiating a contract with Larzellier Communications to broadcast matches for the arena. Most matches are fought for small purses, and with the muddy terrain stripping away the glamour of 'Mech combat, image-conscious and more experiences veterans avoid the Pit.[1]

The Mud Pit is approximately 100 meters deep with a diameter of roughly 200 meters. The mire of mud and water along the lower sides and bottom of the arena dramatically hinder the movement of BattleMechs, making jumping impossible and doubling the cost of any movement. Several vibrabombs are hidden in the The Mud Pit. Deactivated while fighters descend to the Pit, once they reach the thirty meters fire mark that informs the two MechWarriors that they can open fire without endangering the spectators along the Pit's rim. The thick mud forces the pilots to concentrate as much in keeping the 'Mech upright than in shooting. It is not that strange that both fighters try to reach the bottom trying also to seize a position in one of the few pools of standing water, using that to vent heat faster to be able to fire its weapons more frequently.[1]

The Mud Pit was not actually damaged by the Jihad, but the combination of the region’s chronically wet weather, a period of lapsed maintenance from the mid 3070s through the 3080s, and the ongoing erosion caused by the underwater stream that originally transformed it into a venue worthy of its name, have taken their toll. By the 3090s, especially in the local spring season, it became common to see Mud Pit matches where water had pooled up as deep as 15 meters above the arena’s floor. While the Mud Pit’s operators can and do periodically use pumps to drain the venue for traditional fights, some event organizers feel that the unpredictable presence of a small lake in the middle of the arena can add an extra surprise for fans and fighters alike.[2]

The Scrapyard has total seating capacity of 900 in general seating. Admission pricing is much less than the arenas of Solaris City being 17 C-Bills for the general seating available.[1]