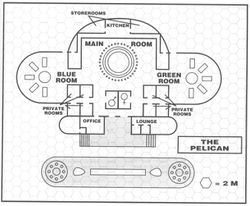 Located in the Solaris City's Black Hills, The Pelican is a high-class bar with MechWarriors and their guest as their usual clients.[1] [2]

The Pelican was named for the original proprietor, a MechWarrior named Paul Slater, whose nickname was won thanks to his skills at hunting opposing 'Mechs in the "water" environment of the arenas. The venue is a perpetually popular night spot and enjoys brisk trade and local clientele, so much that on busy nights the doormen are instructed to admit only celebrities and regular patrons. Fight nights (Tuesday's and Thursday's) make the club closed for general public, allowing the MechWarriors to watch the games on closed-circuit Tri-Vid.

The Pelican's management turns a blind eye to most of what goes on in the club, but draws the line at fights or concealed weapons.[1]

In 3053 the main room of The Pelican is impressive. A domed glass roof reveals the sky and the walls are lined with monitor screens and projectors simulate environments ranging from various arenas to deep space and underwater scenes. At the center of the club there is a trivid projector capable of producing fullsize reproductions of arena matches. The projection area, surrounded by a circular bay, allows to watch a simulation of a fight between two full-scale BattleMechs from less than ten feet away. It is the club's pride and joy, being impressive to say the least.

Always full and when crammed to the top, it can take up to ten minutes or so to walk around from end to end.[2] Flanking the main room there are two seating areas where food and drink for customers who need a break from the hectic activity is served: the Blue Room and the Green Room. Service is slow but fiendly, with food being mediocre and with high prices. Those small rooms do have at the center a small trivid projector and flatscreen monitors on the walls provide diversion for the diners, who can enjoy rebroadcasts of both recent and famous fights.[1]

Many of The Pelican's regular customers desire privacy on occasion while in the club. Eight rooms are available for these special guests, either for a small fee or as a complementary service depending on the customer. Those rooms do have a close camera circuit, that for the right price (often most than the room itself) can be disconnected by one of the managers.[3] Outside of customer's access there is the kitchen, an employee lounge, and storage section and the management office.

The Pelican serves such Davion beers as Conner's Dark.[2] The establishment is also known for Pelican Shooters, a novelty drink which is the focus of a drinking game in the bar. Always made as pairs, the drink consists of a large tumbler filled with multiple forms of alcohol resulting in vile brown color, topped with some form of either celery, onions or other unsavory edible matter. The bartender then relates to the patrons the story of the pelican that supposedly sought a fish in the polluted river just north of the bar, so filled with waste and sewage that it actually caught fire. The bartender then produces a pair of sardines as he intones that another pelican arrived as the first spotted a fish between the smoke and flames, dropping the sardines into both drinks before setting them ablaze. The first drinker to finish their drink, fish and all, is the winner, with the loser having to pay for a round of drinks for the entire bar.[4]