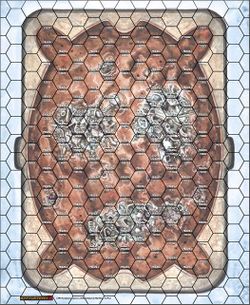 Located in Bracken Swamp in the Reaches, The Pool is one of Solaris VII's most unusual and deadly arenas. Built in the remains of a Star League era sewage treatment plant, combatants in the planet's only aquatic arena battle on the treacherous floor of the Pool, where even a hairline crack on cockpit glass can turn fatal in seconds.[1] [2] [3]

One of more sparsely populated regions of Solaris, during the golden years of the Star League a massive sewage treatment plant was constructed in Bracken Swamp's town of Rowe part of Solaris City, the extremely sophisticated facility capable of purifying more than four million gallons of waste water daily, easily meeting the needs of both Solaris City and Xolara. Like many examples of the Star League's advanced technology, the technological decline of the Succession War era soon meant the plant became LosTech, falling into disrepair for centuries.[1]

In the 2970s the Jullian family took ownership of the sewage plant, converting its retention pool into a submerged BattleMech arena (and in 3051 the owner of The Pool was Vandrake Jullian). The family built a huge blast-proof transplas dome over the top and bleachers around it, as well as box seating booths into the walls of the pool. The rarity of underwater 'Mech combat has made the Pool a popular venue with both MechWarriors and spectators for the challenge and novelty of its fighting environment. Often forced to turn people away due to the arena's limited seating, the Jullians' largely offset this limitation by installing submerged holovid cameras to broadcast its matches to a wide range of bars and hotels in Burgton and Solaris City, and as of 3053, arena manager Estelle Jullian was planning to add additional standard seating above the Pool.[1]

By the end of the Word of Blake Jihad, damage to the Pool forced its managers to shut down the venue for some badly needed overhaul work. Reopening in 3089, the Pool had undergone an extensive renovation, engineers constructing higher viewing stands and raising the height of massive transplas dome, reinforcing the walls and dredging some of the debris on the arena floor to improve mobility. The most notable addition was the installation of a series of heavy industrial grade pumping stations reportedly similar to those used by DropShip refueling tankers. All these modifications enabled the arena's operators to empty and refill the water between matches, not only increasing their ability to maintain the venue properly, but also allowing them to vary its water levels for matches to any level as well producing artificial currents on demand as an extra hazard.[3]

As the only underwater arena on the planet, and underwater combat an uncommon skill, combat in the Pool is throughly different from any other venue on Solaris. Water both aids and hinders BattleMechs, inhibiting their movement and what weapons can be used, while at the same time greatly enhancing their heat sink cooling abilities. Light 'Mechs which rely heavily on jump jets are greatly impacted in the Pool prior to its post-Jihad refurbishment due to the inability of jump jets to work when submerged. [1] The increased depth of the arena after 3089 means that if the Pool is half-empty that 'Mechs have enough room for short bursts of jump jets.[3]

Contenders are lowered into opposite ends of the Pool at the start of matches. At the bottom of Pool, some forty meters below surface level, are a number of large stone piles and construction blocks which block line of sight and even conceal a BattleMech. Aside from these obstructions, the floor of the Pool is almost totally covered in some measure of debris, slowing movement along the bottom.[1]

As part of the post-Jihad refurbishment, the Pool was equipped with massive industrial grade pumping stations that allow the arena operators to vary the height of the water, ranging from totally fully to totally empty, making even normal "dry" combat possible. The process takes several hours so it is not possible to vary the height during a match, only between them, but the powerful pumps can replicate powerful currents. Assuming the Pool is at least half full of water, the pumps can turn the arena in massive churning mess of white water rapids, making combat in the Pool even more unpredictable for those experienced in combat in it.[3]

The Pool has a rather small total seating capacity of just 1,100 - 200 in box seats under the surface of the water built into the walls of the Pool itself, with the remainder in general seating viewing the action from above. Due to poor and unwelcoming conditions of Bracken Swamp, most spectators of the Pool see its matches via holovid transmitted to bars and hotels elsewhere on the planet, never setting foot in the arena itself. For this reason the admission pricing is considerably less than other arenas on Solaris - 40 C-Bills for box seating and just 9 C-Bills for a seat in the bleachers above. While the general seating exposes spectators to the rank smell of Bracken Swamp, the box seats also open one up to similar risk as combatants with the transplas viewing glass weaker than the Pool's armor-plated retaining walls. This was shown tragically in 3043 when a Thunderbolt accidentally punched through the transplas of one of the box seating sections, flooding it in seconds and drowning several spectators.[1]