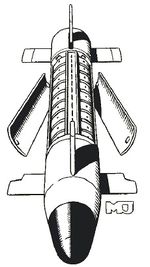 First fielded in 2621, each Thunder LRM missile, referred to by the Clans as FASCAM (Field Artillery Scatterable Mines) rounds, contains five small but powerful anti-vehicle and anti-personnel mines which scatter out when fired, packing enough explosive force to damage the legs of many BattleMechs.

The Thunder LRM was reintroduced in 3052 by the Federated Commonwealth.[1]

While the other Great Houses view their indiscriminate destructive nature as dishonorable, the Capellan Confederation has long relied on mines to make up for its lack of military forces. The CCAF is the largest user of Thunder LRMs in the Inner Sphere, which has led Capellan researchers to develop new variants on the standard Thunder round in 3057, the Thunder-Augmented, Thunder-Vibrabomb, Thunder-Inferno, and Thunder-Active.

Thunder LRMs fire like artillery in that they target hexes, not enemies. They deliver a minefield equal to the LRM launcher that fired them (for example Thunder rounds fired from an LRM-5 would generate 5-point minefield, an LRM-20, a 20 point field) to the targeted hex instead of doing damage to the hex.[2]