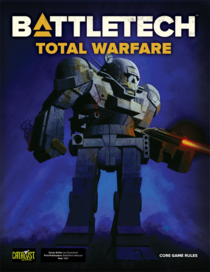 Total Warfare is the current primary sourcebook for tournament play of the classic boardgame BattleTech. The organization of the book has been significantly altered from the previous twenty-plus years of prior editions (of the core rulebook). The intent of the title is to present all current tournament-level rules for play in one tome. The book is not intended for novices, but for dedicated players and judges.

FanPro produced a limited "Collector's Edition" of 1,000 numbered items of the Total Warfare rulebook with a different cover for regular sale, and another special edition of 250 numbered items with another cover that was handed out to the FanPro Commandos.