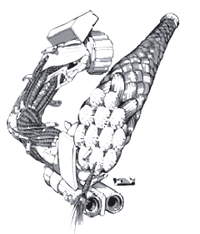 Triple Strength Myomer (a.k.a. TSM) is bulkier and also more expensive than standard myomer. It can be used in the "muscles" of BattleMechs instead of standard myomer, and delivers significantly improved performance when the 'Mech has hit a certain heat threshold (in the CBT game, activate at a heat level of 9+). Under these conditions the 'Mech will move faster (add 2 to the normal walk speed, then multiply that speed by 1.5 to get the new run speed, rounding up) and deal more damage with physical attacks (double damage for applicable attack types, such as punching, kicking, and use of clubs, along with double lifting/throwing capacity). This effectively means that a 50 ton 'Mech can hit as hard as a 100 ton 'Mech in melee combat, and a 100 ton 'Mech is absolutely devastating.[1]

This should not be confused with Myomer Accelerator Signal Circuitry (MASC), an entirely different technology that is incompatible with TSM but also improves myomer performance.

Triple Strength Myomer is, however, compatible with the supercharger device.[citation needed]

The Federated Suns intentionally leaked early research results regarding TSM to the Capellan Confederation during the Fourth Succession War. The Capellans were quick to copy the technology and the 'Mechs of Warrior House Imarra, who guarded the Capellan capital at Sian were equipped with TSM first. Unbeknownst to them was the fact that this early version of the improved myomer reacted violently when exposed to a certain gaseous agent. The Kathil Uhlans took advantage of this during a raid on Sian to extract double-agent Justin Xiang Allard at the end of the war by fogging the entire area with the green gas. This led to violent chemical reactions whenever the armor of a defending Imarra 'Mech was breached, rendering them incapable of mounting an effective defense.

Much to the chagrin of the Federated Suns, the Capellan Confederation was the first to perfect the TSM formula and gained a valuable technology which they later used as a bargaining chip to gain further advanced technologies from the Free Worlds League. This perfected TSM went into use in 3050.[2]

By the Dark Age, it is indicated that the technology had come into use by the Clans, particularly with Clan Jade Falcon's Jade Hawk.

Prototype TSM is the early manufacture version of TSM. This formula was created by the Capellan Confederation as a result of receiving a "leak" from the Federated Suns in 3028. This meant it was vulnerable to the Anti-TSM Missile mixture created by the Federated Suns. This type of Myomer is always active however. It does not increase the movement speed of a 'Mech, but it does double the physical attack damage of a 'Mech using this type of Myomer, and double its lifting/throwing capacity.[3]

As part of the experiments that led to Triple Strength Myomer, the NAIS and other research firms went through several prototypes. Though unsuited for combat use, there were several formulations that held promise for Industrial applications. This information, released in 3040 allowed IndustrialMech manufacturers to create Industrial Triple Strength Myomer which was ideally suited for loading, hauling, and other heavy lift tasks.[2]

Triple Strength Myomer is manufactured on the following planets: