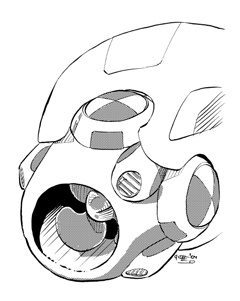 The Underwater Maneuvering Unit (or UMU) was first created in 3059 by Clan Goliath Scorpion for their Undine battle armor. Once word of this trickled back to the Inner Sphere, several manufacturers began experimenting with creating a BattleMech sized version. Several Solaris arenas provided a testbed for the technology, and the information gained by these experimental units (particularly the Aquagladius) led to the creation of a series of working prototypes.

Useful only when completely submerged[1], the UMU uses a modified waterjet system to propel the BattleMech through the water. This makes the unit far faster and more agile underwater, but this also works against the UMU-equipped unit.[2] A BattleMech equipped with UMUs may not exceed its normal walking speed when underwater, nor may it use Jump Jets.

Battle armor UMUs can only be used in Depth 1 or deeper water.

UMUs are manufactured on the following planets:

The UMU system acts similarly to a Jump Jet, but may only be used in Depth 2 or deeper water. For every UMU installed, the unit gets 1 underwater MP. These underwater MPs may not exceed the walking/cruising speed of the unit. Unlike Jump Jets, using UMUs only generates 1 heat point, no matter how far the unit moves. The UMU may not be used to move into or out of water. A 'Mech in Depth 1 water may not use UMU movement.[4]

For construction purposes, follow the rules for Jump Jets when installing UMU on BattleMechs and ProtoMechs.[5]

These can only be mounted on Clan humanoid battle armor. Battle armor mounting UMUs may not mount any other type of special movement system.[6] Weight varies from 45 kg to 250 kg per UMU MP, depending on the weight class of the unit.[7]