Vasily Cherenkoff (Born 2980 – Died May 3034) was an officer in the Draconis Combine Mustered Soldiery who eventually rose to the rank of Warlord of the Dieron Military District. 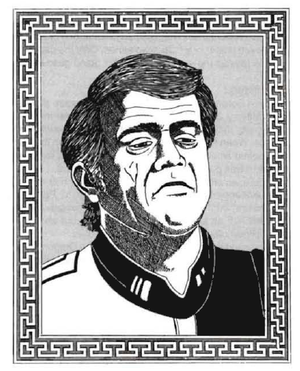 Cherenkoff was born on Dieron, the capital of the Dieron Military District of the Draconis Combine. As his family was distantly related to the ruling House Kurita, and had produced many able Generals for the Combine over the centuries, Cherenkoff had every advantage of noble birth. Upon graduating from the Sun Zhang MechWarrior Academy on New Samarkand, his comparatively low marks initially landed him to a unit on a backwater planet. Using his family connections, he was able to obtain a transfer to a frontline unit in the Rasalhague Military District. He later used his family's connections again to obtain acceptance into the Wisdom of the Dragon academy on Kagoshima. Afterward, he was assigned as a Tai-i with the 12th Dieron Regulars, and began attending social functions on the Combine capital of Luthien.

It was on Luthien that he first came to the attention of Takashi Kurita, who saw value in Cherenkoff's loyalty and family connections. After Takashi Kurita became Coordinator, he slowly began helping Cherenkoff's career along. By 3020, he had been promoted to Tai-sho when he apparently won an impressive victory against Lyran forces on the planet Marfik.[2]

After his victory on Marfik, Coordinator Kurita was quick to promote Cherenkoff to Warlord of the Dieron Military District. Comprised of the Combine's worlds closest to Terra, Dieron was critical considering its border against both the Lyran Commonwealth and the Federated Suns, both ancient enemies of the Combine. The Coordinator further appointed the talented Kester Chi as aide to Cherenkoff, and Chi soon became Cherenkoff's most trusted advisor. [3]

Cherenkoff's overall performance was apparently satisfactory if uninspiring during his tenure, despite setbacks such as a Wolf's Dragoons-led attack on Dromini VI in 3021 that resulted in heavy losses for the Combine, including among the elite 2nd Sword of Light. [4][5] Cherenkoff participated in the successful conquest of Cylene, during which he butted heads with Hirushi Shotugama, who at that time was commander of the 9th Benjamin Regulars. [6] Theodore Kurita briefly served as an aide to Cherenkoff as part of his early career. The Warlord and the heir to the throne apparently did not grow close during this time, causing serious difficulties later. In December 3025, Cherenkoff attended one of the Coordinator's "Black Room" meetings of his District Warlords. He participated in the petty politicking and bickering among the Warlords, most notably attempting to needle Hirushi Shotugama, now newly appointed Warlord of the Benjamin Military District. The 5th Sword of Light was transferred to Cherenkoff's district to participate in raids on the Federated Suns. [7]

In 3028, Hanse Davion and Katrina Steiner launched the Fourth Succession War. Federated Suns troops struck the Capellan Confederation en masse while Lyran troops struck at the Combine. The Commonwealth's Operation GÖTTERDÄMMERUNG took the Combine completely by surprise in its boldness and coordination, quickly seizing many worlds all across the broad front. The Dieron Military District weathered the attacks somewhat better than the Rasalhague district, though this was largely credited to Theodore Kurita's mobilization of the Legion of Vega brigade, ultimately inspiring several other Kuritan commanders to follow his lead in launching Operation CONTAGION, a counter-attack against the Commonwealth's Isle of Skye region.

Cherenkoff, meanwhile, reportedly remained bunkered in his fortress on Dieron, for the most part launching only a few minor raids on the highly under-defended Federated Suns border. He did release Brion's Legion and the 9th Dieron Regulars to the Combine's unsuccessful offensive against the planet David in Davion's Draconis March, though it was speculated this was more to deny them to Theodore Kurita than any other reason. [8] The Kuritan heir was successful despite receiving virtually no support from the Warlord. Indeed, by the war's conclusion, many felt Cherenkoff should have been replaced by the young Kurita. Instead, Takashi Kurita named his son Gunji-no-Kanrei, as deputy of military affairs, a position he believed his son would not be able to draw true authority from. [9]

The early 3030's saw conflict brewing within the Combine between Theodore Kurita and those seeking to reform the military, and the traditionalist doctrine of his father Takashi that was supported by Cherenkoff among others, and were bitterly opposed to these reforms.

This came to a head in 3034 when Theodore attempted to recognize the newly-formed Free Rasalhague Republic in a deal with ComStar, which would effectively create a buffer zone between the Combine and much of the Lyran-half of the Federated Commonwealth. Though Takashi clearly did not personally support this move, he nevertheless did not throw his support behind those of his Generals who launched the Ronin War in opposition, in an attempt to crush the Republic. This effort was led by Cherenkoff and Marcus Kurita, and was opposed by "Loyalist" Combine troops under the overall command of Theodore Kurita. Strangely, Cherenkoff was either unable or unwilling to commit his Dieron Regulars to the conflict.

Cherenkoff gathered several of his regiments on Orestes in May of 3034, including the 22nd Rasalhague Regulars, the 2nd Night Stalkers and the 1st Altenmarkt Militia. They were opposed by the 3rd Drakøns, supported by the mercenary units 1st Dismal Disinherited and the Legion of the Rising Sun, both on loan from the Lyrans.[10]

Early in the battle, Cherenkoff's 'Mech's head exploded. Though originally reported to be a mechanical failure, it was soon revealed that Cherenkoff's aide, Tai-sho Dexter Kingsley, had seen the writing on the wall and hoped that by assassinating his commanding officer, Theodore Kurita would reward him by appointing him to replace Cherenkoff as Warlord. He would be disappointed.[11] [12] The Ronin War was soon put down, and the new Republic gained true independence.

Cherenkoff was frequently described as a competent but not particularly innovative commander, and his lofty position was due more to his unquestioned loyalty to Takashi Kurita than to any innate ability. To that end, he almost certainly viewed his participation in the Ronin War as a service to Takashi. He frequently relied on his family's connections for advancement in his career, later relying on the patronage of the Coordinator for his continued promotions. He seemed paranoid of the influence Theodore Kurita was winning in his district and throughout the Combine, and this combination of qualities ultimately resulted in his downfall. Despite his exceptional skill in judo, he took great joy in drinking and eating to excess far more than the company of friends. ISF Director Subhash Indrahar once privately described him as a "fat fool" when Cherenkoff attempted to provoke Takashi Kurita and turn him against his son Theodore's reforms. [13]

Cherenkoff piloted an Atlas BattleMech up until his death on Orestes. [14]