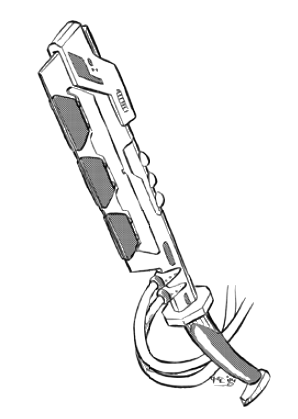 A Vibroblade is a melee weapon used across the Inner Sphere, first introduced in 2400 by the Free Worlds League.[1] The vibroblade is used (and most often shaped) like a conventional sword, but also includes a power pack in the hilt for a series of motor systems. When activated, the vibroblade's cutting edge oscillates at a very high speed, cutting through anything in its path.

Vibroblades are available in a variety of sizes, ranging from personal weapons to experimental BattleMech sized versions.

The BattleMech Vibroblade was developed by Draconis Combine engineers in 3059 but didn't reach the deployment until 3065.[6] Using their Sword as a foundation, they were able to incorporate the same technology that makes the personal vibroblade and vibrokatana so effective. Unlike the standard Sword the BattleMech vibroblade comes in three sizes: small, medium, and large. When unpowered, the vibroblade acts as a standard 'Mech sized sword. When the pilot activates the vibroblade, and successfully attacks an opponent, the cutting edge slices even deeper into the target, inflicting more damage than a sword. The tradeoff for this increased damage is the heat generated by the vibroblade's mechanisms and the fact that an active vibroblade won't benefit from Triple Strength Myomer.[6]

Though the vibroblade offers some advantages over the standard Sword, it hasn't yet been deployed in large numbers. In fact it's only been seen in the arenas of Solaris and other game worlds.[7][8]

The amount of heat generated and damage inflicted by the vibroblade varies depending on the size of the weapon.