Victor Vandergriff was a mid-31st century Lyran Solaris VII MechWarrior. He was a one-time contender for the Solaris VII Class 6 Championship.

During his initial rise, Vandergriff defeated Drago "Death from Above" Alldredge in a modified Wolverine, destroying the gyro of Alldrege's Daedalus in a savage display.[1]

By 3051 Victor Vandergriff was fighting for Oonthrax Stables and ranked seventeenth in the Solaris Top Twenty.[2]

Victor was part of the Skye Tigers Stables[3], and was billed as the stable's number one fighter in late 3055. During his early fighting years, he was among the elite fighters of the game world, and had high hopes of becoming the Champion of Solaris.

His stable owner, Duke Ryan Steiner, was using his Stable as a means to exercise his political ambitions. Ryan Steiner decided to position Vandergriff to confront his political adversary's friends along with the current Champion of Solaris, Kai Allard-Liao.

At a party in March 3056, hosted by Mandrinn Tormana Liao, Victor Vandergriff was introduced to a trio of political scions including: Duchess Katrina Steiner-Davion, Kommandant Galen Cox, and Lady Omi Kurita. An argument quickly broke out between Duke Ryan and Galen Cox. Victor stood between him and Cox where they had a disagreement that started over the differences between regular combat and the fights of Solaris. Cox said he wished to confront Victor, but due to his not being a licensed professional fighter it would not be allowed. However, Kai Allard-Liao intervened and granted Cox an apprentice license to enable him to fight. To persuade Duke Ryan into approving the match, Kai proposed to change a scheduled warmup match between him and Victor to the following week with Cox as his partner in the fight.[4]

On April 9th, Victor was teamed with his stable's rising star, Glenn Edenhoffer. For his fight, Victor brought a Goliath GOL-3S BattleMech into the labyrinthine tunnels of the Ishiyama arena. During the course of the fight he switched off fighting against Kai's Penetrator and Cox's Crusader. Victor came close to overcoming his opponents, but Kai skillfully destroyed his 'Mech's gyro, defeating him and then his teammate shortly afterwards.[5]

After his crippling loss, Victor felt abandoned by his fans and the Skye Tigers, traded to desperate Lynch Stables. He lingered in the lower fighting classes for years. He was sometimes referred to by fight fans as a Zombie (Solaris VII slang for someone who knew he was already dead to the games). However, through his determination to not give up, he kept on fighting matches regardless of everyone. [6]

At the start of the 3062 season, Vandergriff was ranked twentieth in the Top Twenty.[7] By this stage Victor had developed a severe case of paranoia.

In that year's Grand Championship he fought against Stephen Neils in the first round, winning it. When Neils 'Mech falls, his cockpit was crushed. His death appears to have been an accident, not a killing in cold blood by Vandergriff.[8]

Through this paranoia, and during the Championship, he began to win fights with his battered Banshee assault 'Mech, climbing towards the finals.

On his fourth fight that year he beat Albert Mayetska.[9]

On August 15th, Victor began the fight for the title of Solaris Grand Champion, but the duel with Michael Searcy turned into open warfare in Solaris City. Vandergriff, began to lead the fight with the Katrina Steiner-Davion loyalists, however reluctantly. He was driven by the only thing he cared about, to have a rematch with Searcy. Due to his paranoid state of mind, Victor believed the FedSuns warrior was attempting to kill him.

The 16th of August during the push and takeover of the Riverside District, he encountered and killed Aaron Harper.[10]

On August 22th, Michael Searcy led a FedSuns task force of 'Mechs and people into Loyalist-held areas. There he and Searcy began to finish their duel. Searcy lured Victor into the darkened Steiner Arena to finish his match and to keep the fighting from resuming in the city. Victor continued to fight without reason or caution, ignoring his 'Mech's heat levels. The duel took a brutal turn as Victor's Banshee engine began to lose containment and consume itself with white-hot fusion fire. In his last moments, Victor managed to down Searcy's Pillager, as his 'Mech exploded killing him, never letting go of his triggers.[11]

Prior to the Solaris Riots, he started fighting for the Grand Tournament in a Striker.[12]

In 3062, in his fight against Michael Searcy he was piloting a custom Banshee equipped with jump jets. 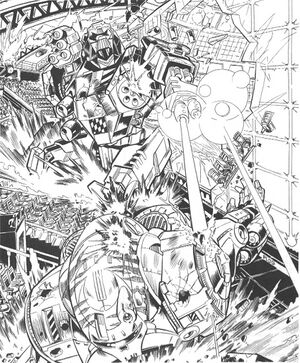