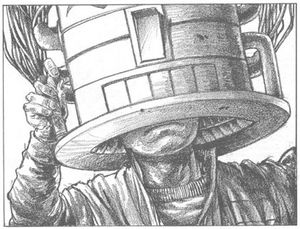 Proposed by Professor Burke Kale in 3047, the Virtual Reality Piloting Pod (or VRPP) was designed as a simplified version of the DNI project, but was actually a cover for continuation of his DNI research. Instead of connecting the pilot directly to the BattleMech, it used a more advanced version of the Neurohelmet sensor technology to read the pilot's mind more accurately and moved most all manual functions into the Neurohelmet control. This required the VRPP Neurohelmet be integrated into the cockpit to provide the MechWarrior a completely simulated 3D environment of the world around them which took advantage of the Torso Cockpit's limited view. By eliminating all the manual controls and moving to a purely electronic interface, the system decreased the cockpit size[1] and allowed for taller MechWarriors than previously possible.[2]

The VRPP suffered none of the inherent dangers or risks associated with the DNI system to the MechWarrior. Unfortunately, the DNI and VRPP were linked in the minds of the commanders involved, so when the Federated Commonwealth decided not to pursue the project the VRPP was mothballed along with the DNI. Instead they devoted funding to the Small Cockpit and Torso Cockpit systems.

The VRPP technology was implemented into two prototype P1-WF Wildfires and used by the short-lived Seven Deadly Sins Stables on Solaris VII, in an attempt to recover Professor Burke Kale and his stolen DNI technology in 3053.

The Virtual Reality Piloting Pod was a highly advanced cockpit design that allowed for the pilot to function at a higher level of efficiency. (This resulted in a -1 modifier to gunnery, -2 modifier to piloting skill and +3 to initiative using optional Solaris VII initiative rules.) [3] The drawbacks of the system were relatively minor. Mechwarrior's had to get used to the advanced interface of the VRPP, with a solid day of training they could gain the advantages. Otherwise they suffered a +2 to the gunnery and piloting skill rolls, which will the bonuses of inherent in the advanced system working out to just a +1 to gunnery penalty. [4]