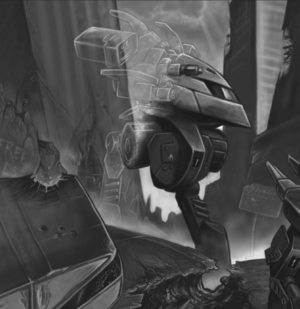 Introduced by the Word of Blake in 3070 after ten years of research[1] the Void Signature System was rare. Though it was mounted on some unexpected units (including an Archer variant used by the Protectorate Militia), the Void was usually seen on Raptor II variants and in the Shadow Divisions.

One limiting factor for the Void Signature System was its high cost. The base system cost two million C-Bills, but that didn't include the cost of an ECM suite to power it.[2] This restricted the Void System to those units the Blakist commanders could make the best use of it.

A 'Mech with this system may not mount a Chameleon Light Polarization Shield, Null Signature System, or Stealth Armor. Any Satellite Uplink systems, Targeting Computers or C3 equipment cannot be mounted either.[1]

The void signature system does not weigh a significant amount by itself. However, it does require an ECM suite to be installed to function. The system takes up one critical slot in each of the 'Mech's hit locations except for the head, for a total of seven critical slots. A critical hit to any of these slots (including the ECM suite) will disable the entire system.[1]