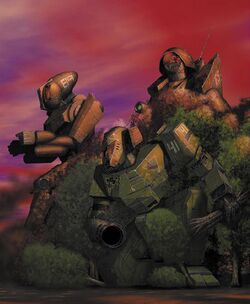 A Grasshopper, a Clint, and a Cyclops of House Dai Da Chi

Founded by Colonel Dai Da Chi of the Red Lancers.

Warrior House Dai Da Chi saw combat during the Andurien Crisis, during which an alliance between the Magistracy of Canopus and the Duchy of Andurien invaded the Confederation in 3030.[1] Dai Da Chi was posted on Drozan when it came under assault by MAF forces in October of that year.[2] Aware that Dai Da Chi was the lynchpin of Capellan defenses along the anti-spinward Canopian invasion corridor, the MAF committed the 1st Canopian Light Horse and Harcourt's Aliens as well as a mercenary detachment from Caesar's Cohorts.[2]

The MAF assets, used to fighting ragtag Periphery units, drastically underestimated the skill and cohesion of a Capellan Warrior House. Dai Da Chi gave no quarter to the invading forces, crashing a commandeered shuttle into a Harcourt's Aliens armor transport before the fighting truly started, as well as skillfully managing an elastic defense and bleeding the Light Horse and Aliens effectively in the few engagements that the Warrior House permitted. Caesar's Cohorts performed much better, only losing around ten percent of their committed forces - by the end of the year, the Light Horse and Aliens had taken around twenty five percent losses, although Dai Da Chi had sustained fifty percent losses from the all the fighting on-planet by December 3030. By that time, the MAF forces had taken control of much of the agricultural infrastructure of Drozan (although their holdings had been successfully infiltrated by Dai Da Chi operatives), with the Warrior House stubbornly protecting the mountain strongholds and population centers.[2]

During the first half of 3031 the fighting degenerated mainly into sporadic raiding by Dai Da Chi, while the MAF forces waged a mainly defensive campaign. Angered by MAF commander Cynthia Evans' reluctance to attack the Warrior House in force, Caesar's Cohorts commander Worrell Orosco began offensive operations in May. However, by July it became clear that these operations had failed to inflict serious damage to Dai Da Chi, with the Cohorts instead suffering badly from the repeated clashes. After this fact became apparent, the MAF line units joined the attack and made surprising progress. Meeting with little resistance throughout the month, by the 3rd of August Drozan was declared under Canopian control and Dai Da Chi was deemed destroyed. In reality, the Warrior House had simply abandoned its static holdings and begun preparations for a guerrilla war.[3]

In March of 3032, after the MAF had landed more troops and begun using Drozan as a staging point, Dai Da Chi made a surprising return along with elements of the 1st Liao Dragoons. The unexpected attack severely bloodied the MAF forces planetside, who were forced to retreat and abandon much of their territory. Caesar's Cohorts, who were still posted on Drozan, offered brief resistance before evacuating to Andarmax while the rest of the MAF forces escaped to New Roland.[4]

By 3033, the momentum of the campaign had swung firmly in favor of the CCAF, and Dai Da Chi deployed to Jacomarle in April alongside the 1st Liao Grenadiers where they swiftly ejected Long's Light Lancers from the planet[5] before redeploying in November of 3034 to New Roland where along with the 1st Liao Hussars they routed the MAF forces in the field, finally driving them off-planet by February of 3035.[6]

In August the Fourth and Twenty-First Illician Rangers landed on Victoria essentially unopposed and occupied the Trellis Electronics factory. Shortly afterwards the second battalion of House LuSann landed, followed by the entirety of House Dai Da Chi. After four week on planet the Rangers had caused all the mischief they could short of destroying the factory, and on 15 September they retreated off world for Mendham and Frazer. Both Rangers would suffer moderate casualties (≤25%) while House LuSann returned to Jackson with only light losses (≤10%). House Dai Da Chi bore some of the heaviest fighting, first battalion suffering moderate losses (≤25%) while second battalion was classified as severe casualties (≤60%). Both battalions returned to their longtime base on Drozan. Capellan media called this conflict a resounding victory, claiming “Houses LuSann and Dai Da Chi defeated a Davion force three times their number, once again demonstrating to all the superiority of the Capellan soldier.”[7][8]

Sent on Tikonov at end of the Steiner-Davion civil war, allegedly to assist Victor Steiner-Davion. Victor could not allow the unit to travel with him to New Avalon, fearing they would fight with the Blackwind Lancers. Left on garrison duty, House Dai Da Chi then claimed the world for House Liao following a battle with the 23rd Arcturan Guards with the help of the Free Republic Revolutionaries. They moved to assist the besieged Guard, and were purportedly fired on by the 23rd, claiming the planet in the name of the Chancellor. Dai Da Chi lost twenty percent of its matériel in the battles.[9]

During Operation SOVEREIGN JUSTICE Warrior House Dai Da Chi spearheaded one of the Capellan task forces that countered the Federated Suns' assault. They faced AFFS forces on New Syrtis and Almach. During the Jihad they faced off against Word of Blake forces on Foochow and later smashed all Blakist resistance on Poznan. As of 3079, they remained on Poznan, guarding the world for the Confederation.[10]

During their counterattack into the Federated Suns, the troops of Dai Da Chi routinely destroyed civilian targets including power stations and manufacturing centers. Many of the planets they attacked had their power plants and spaceports rendered inoperable, increasing the time it took to recover from the assault. This method of wanton destruction even extended to their own worlds when fighting the Word of Blake. On Poznan for example the House Master ordered two cities completely destroyed with artillery fire rather than try to root out Blakist forces in a house to house search.[11]

When the Republic of the Sphere counterattacked the Capellan invasion in 3082, Stone's Lament faced the soldiers of this Warrior House on Styk. Despite fighting hard, eventually the Republic unit forced the Dai Da Chi warriors off-world with heavy losses.[12] During this fighting, the Tao 'Mechworks plant on Styk was gutted.[13]

In 3085 Warrior House Dai Da Chi was the garrison for Westerhand.[14]

The Warrior House and elements of McCarron's Armored Cavalry landed on Palos in 3134. There they faced a Principes Guards unit. After three weeks of combat, the Capellans had taken the world.[15]

It is to be seen how House Dai Da Chi will continue, as years of brutal frontal assaults have claimed the lives of many of the House’s most experienced MechWarriors.[20]

House Dai Da Chi prefers stand-up fights to running engagements and decimate most of the forces which meet them on equal footing.[22]

Note: At this point in time the unit was stationed on Drozan.[23]

Note: At this point in time the command was stationed on Drozan.[24]

Note: At this point in time the command was stationed on Drozan.[8]

Note: At this point in time the unit was stationed on Grand Base and Holloway.[25]

Note: At this point in time the unit was stationed on Poznan.[10] The battles of Operation Thunderbolt and the Jihad reduced the Warrior House down to a little under two thirds of its pre-Jihad strength.[10]