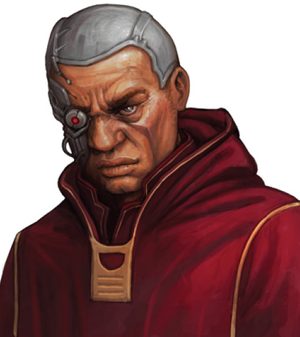 Precentor Apollyon was a thirty-first century Military Commander and Sub-faction leader in the Word of Blake.

Apollyon was a master of intimidation: he was an expert in conducting interrogations and brainwashing. Among his victims were Fritz Donner and Michael Cirion, both of whom had commanded the Black Warriors.

Apollyon had a strong distrust, even hatred, of Cameron St. Jamais: Apollyon thought of St. Jamais as an "arrogant whelp" who was worse than the "Pretender" Thomas Marik and even Jaime Wolf.[2]

Much of Apollyon's past is a mystery to the general public, however intelligence agencies believe that he was a former native of the lost world of Jardine, one of the Word of Blake's five hidden worlds, and the leader of that planet too.[3]

During the beginning throes of the Jihad, he led the hunt for Doctor Brooklyn Stevens, who had discovered the location of Jardine.

After the Ghosts of the Black Watch rescued Hohiro Kurita from Dieron, Apollyon ordered the Opacus Venatori to destroy the unit and kill Colonel Loren Jaffray.[4]

On August 9th 3071, Free Worlds League government gave control over Gibson to Apollyon.[5] After taking control of the planet he created a massive command and control complex that became the headquarters for his Shadow Divisions.

In February 3074, Apollyon led the 52nd Division to Bolan where he directed his people to destroy the capital of the planet. The fighting against the Brion's Legion prevented him from killing the planetary leader, Duke Umayr. After sacking the capital city he ordered the execution of the planetary nobility.[6]

In 3075, Precentor Cameron St. Jamais had sent a series of transmissions to Apollyon, demanding to know why the Shadow Divisions were attacking his worlds. Apollyon simply replied that only the worthy would be allowed to survive and that the Master trusted him, Jamais, to hold Terra against their enemies.[7]

In early 3076, Apollyon asked for a meeting with the "Captain-General" of the Principality of Regulus, calling for a ceasefire between the two. In April, Apollyon arrived with a task force drawn from the 50th Shadow Division[8][9] for meeting with the Prince of Regulus. He found that Prince Kirc Cameron-Jones had been replaced by his son, Titus Cameron-Jones. In the meeting at Regulus's capital city spaceport, he delivered an ultimatum to the new Prince, stating that the crimes of his father, especially his attack against Gibson, would no longer be tolerated, proclaiming that all of Regulus would pay the price should they conduct any actions outside their borders, be it by proxy or by themselves. They would get to know the full fury of the Master. As he awaited the answer to his ultimatum, the Prince's wife had snipers try to shoot him. However, Apollyon's escort troopers took a number of shots for him. Regulan commandos then emerged from DropShips and attempted to assassinate Apollyon, however almost immediately after the shooting started, he ordered his Level II of invisible mimetic Battle Armor body guards to reveal themselves, forming a ring around him. The commandos were quickly killed by the Level II of guards. Apollyon then approached the Prince and Princess, telling Michelle Cameron-Jones he would have been disappointed if she had not tried something. He then addressed the whole Regulan delegation and soldiers using his augmented voice, asking how they could dare trying to attack him. Apollyon continued that he must give a demonstration of what will happen if they do heed his ultimatum. Apollyon orders one his battle armor clad warriors to grab the Prince's left fore-arm and holding him aloft for all to see, shatters it. He again asks the Prince Titus if he understands he can crush his frail bones as easily as he can crush his frail nation. The Prince, in serious pain, is able to give his response, confirming that he understands.[10]

In 3076, the word of the destruction of the Ventura prototype WarShip had reached Apollyon. Once it is clear Regulan forces were involved with its destruction, he orders Naamah to send a personal visceral message to Prince Titus,[11] which turns out to be the murder of his wife Michelle and her unborn child.[12]

On the 30th of April 3078 Colonel Marcel Webb - commanding officer of the Star Seeds mercenary unit and head of security for the allied coalition - announced in a news broadcast from Kittery that the allied coalition was filing criminal charges on behalf of all the allied nations against a number of Word of Blake senior or high profile figures, including Apollyon. The coalition intended to charge Apollyon with terrorism, murder and genocide.[13]

Apollyon was on Gibson in 3079 when the Principality of Regulus entered orbit in the system and unleashed a bombardment of nuclear weapons. The entire planet was destroyed, and Apollyon was presumed killed.[14][15]

Apollyon: "I assure you, Colonel, were conversion or torture our only goal, you would most certainly be a broken man by now."
Fritz Donner: "Broken? Or turned into one of you freaks?"
Apollyon: "Do you really think you could stop us from doing that even now? All we would need is a surgical table and a lot of sharp objects."
Apollyon: "No, Colonel. You remain as you are because we have made you so. We have strengthened your resolve, given you focus, because the Master has willed it so. And now, you are ready for your mission..."