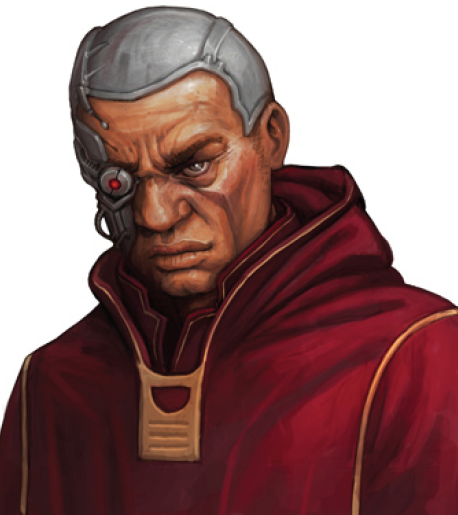 During 3075 Precentor Cameron St. Jamais had send a series of transmissions to Apollyon, demanding to know why the Shadow Divisions were attacking his worlds. Apollyon simply replied that only the worthy would be allowed to survive and that the Master trusts him, Jamais, to hold Terra against their enemies.[5] In early 3076, Apollyon asked for a meeting with the "Captain-General" of the Principality of Regulus, calling for a ceasefire between the two. In April, Apollyon arrived with a task force for meeting with the Prince of Regulus. He found that Prince Kirc Cameron-Jones had been replaced by his son, Titus Cameron-Jones. In the meeting on Regulus's capital city spaceport, he delivered an ultimatum to the new Prince, stating that the crimes of his father, especially his attack against Gibson, would no longer be tolerated, proclaiming that all of Regulus would pay the price should they conduct any actions outside their borders, be it by proxy or by themselves. They would get to know the full fury of the Master. As he awaited the answer to his ultimatum, the Prince's wife had snipers try to shoot him. However, Apollyon's escort troopers took a number of shots for him. Regulan commandos then emerged from DropShips and attempted to assassinate Apollyon, however almost immediately after the shooting started, he ordered his Level II of invisible mimetic Battle Armour body guards to reveal themselves, forming a ring around him. The commandos were quickly killed by the Level II of guards. Apollyon then approached the Prince & Princess, telling Michelle Cameron-Jones he would have been disappointed if she had not tried something. He then addressed the whole Regulan delegation and soldiers using his augmented voice, asking how they could dare trying to attack him. Apollyon continues that he must give a demonstration of what will happen if they do heed his ultimatum. Apollyon orders one his battle armour clad warriors to grab the Prince's left fore-arm ad holding him aloft for all to see, shatters it. He again asks the Prince Titus if he understands he can crush his frail bones as easily as he can crush his fail nation. The Prince, in serious pain, is able to give his response, confirming that he understands.[6]

In 3076, the word of the destruction of the Ventura prototype WarShip had reached Apollyon. Once its clear Regulan forces were involved with its destruction, he orders Naamah to send a personal visceral message to Prince Titus,[7] which turns out to be the murder of his wife Michelle and her unborn child.[8]