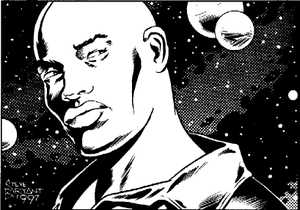 Brendon won the rank of Star Captain early in his military career, before earning his bloodname at the age of twenty four. He was one of the many newly blooded warriors prepared for Operation Revival. He was a natural ‘Mech pilot able to exploit terrain and use his opponent’s movement against them. He acknowledged his one weakness was tactical and strategic planning, but studied long and hard to rectify this perceived deficiency.[1]

During the Invasion of the Inner Sphere he commanded a Trinary of the 6th Jaguar Dragoons. On Tukayyid it was Corbett that rallied the shattered Alpha Galaxy, rescued his sibling Khan Lincoln Osis and led the fighting withdrawal from the Dinju Heights.[1]

An indebted Lincoln Osis’ backed Brendon in his Trial of Position for Star Colonel in the reforming 6th Jaguar Dragoons. Ever the ambitious warrior and with the good will of the ilKhan, he petitioned for the re-formation of Alpha Galaxy and won the title of Galaxy Commander for himself.[1]

In August he took overall command of the Jaguar forces in the Inner Sphere after Mikhail Ward had proved ineffective; Jin Mehta had already been killed and Hang Mehta severely wounded during the Counter Attack. Brendon restricted the Jaguar tactics along a more defensive line, with disregard for Lincoln Osis’ previous orders for aggressive action. This action alone saved the lives of many warriors and integrity of many Jaguar Clusters, allowing for a coordinated retreat once the withdrawal orders came.[1]

Galaxy Commander Corbett led the Jaguar's Spirit Keshik and the remains of the 9th Jaguar Cavaliers from Marshdale to Tranquil. Here he linked up with the on planet garrison. Issuing a general order for troops to regroup at Tranquil with him, he awaited their arrival.[2] Unfortunately for Corbett’s plans an Inner Sphere force known as Damocles Commando hit Tranquil and engaged his forces in hit and run attacks, fighting still ongoing even after the results of the Great Refusal became known. Inner Sphere interceptions of Clan communications reported speculations that Corbett would be voted as the next Khan of the Smoke Jaguars.[2] Galaxy Commander Corbett personally led a star that forced the majority of the commandos off planet in their only surviving drop-ship. Turning his attention to the last surviving commando lance he fought them for possession of a shuttle that the commandos required to escape. During this encounter his Dire Wolf was downed by concentrated fire, and he was presumed killed in this action.[2]