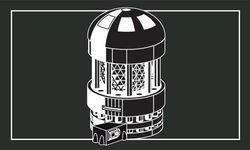 Intended for reconnaissance 'Mechs or vehicles, the C3 Command Unit, also known as C3 Master Computer, is the central hub of a C3 Network and allows linked units to share radar and targeting data on the lance or company levels.

Normally carried by the lance commander, the C3 Command Unit is the hub to which three C3 Slave Units on other friendly 'Mechs can connect. However C3 Command Units can also be linked in this manner to expand the network, the command units of each of lance commanders can be connected to a second separate command unit carried by the company command 'Mech/vehicle. Due to complexity required to coordinate C3 networks, they can not be expanded beyond company size, or multiple companies linked together, even with the addition of extra command vehicles. The limitations in unit size are part of the reason for the ComStar developed Improved C3 Computer.

As well as serving to share the linked lance/companies targeting data, the C3 Command Unit also duplicates the function of Target Acquisition Gear and can designate a target for Arrow IV homing missiles and Semi-Guided LRMs.

A C3 Command Unit is typically carried by a heavy or assault 'Mech due to its the larger size and weight, and its importance as the hub of a C3 network. Outright destruction or interruption by ECM of a command unit is quickest way to bring down the portion of the C3 network it controls.

The C3 command unit is the core of a C3 network. Should it be destroyed, or knocked out as a result of a critical hit, the entire network of any vehicles pointing to the C3 Master will also go down, unless other units happen to carry C3 Emergency Masters (see Models below).

When a unit has an enemy within line of sight, all units within the same C3 network will be able to target the spotted enemy using the best range modifier available to the closest spotting unit. So, a unit can fire a SRM at a target in its own long range bracket as though it were short range, as long as a squad mate can hit the target within the short range bracket of its AC/2 for example. This benefit ignores a target within minimum range for exceptionally close spotters. Any shot fired by a separate unit in the C3 network is subject to its own minimum ranges, not the spotters minimum ranges, in which case the range will be considered short (or whatever the lowest applicable modifier would be). [2]

As mentioned above, the C3 Master Computer can also duplicate TAG functionality for use with homing weapons. No other C3 system has this functionality.

A C3 Master being controlled by a master can't control another master.

All of these bonuses are negated if the connection between the master and slave unit is disrupted by an ECM field, except for the TAG functionality of the master. This can mean a unit is within the ECM field, or the line of sight between slaved units and the master passes through an ECM bubble.[2]

The C3 Command Unit is manufactured on the following planets:

The Dragon's foes were targeting 'Mechs that mounted the C3 Master computer, rendering the entire network useless. To counteract this, the Dragon created the experimental C3 Emergency Master computer in 3071.[3] By stripping out the TAG functionality and exchanging longevity for capability, the engineers on the C3EM team created a device that could step in as a temporary backup system for a C3 network. Though it occupies twice as much space and weighs twice as much as a standard C3 Slave unit,[4] the C3EM can (briefly) keep a traditional C3 network running in the absence of a C3 Master computer.

The biggest drawback to the system is the tremendous wear and tear placed on the unit during its short life. After 60 seconds of use, the system processor is overloaded with data and shuts down.[3] Another drawback to the C3EM is the fact that once it enters "Master" mode, it cannot be deactivated. The C3EM will function as usual in a friendly ECM bubble, but a hostile ECM bubble will cause it to go into standby mode.[3]

Introduced by the Federated Suns in 3073, the C3 Boosted Master system was originally an experimental system that ignores all electronic warfare equipment, ECM suites, etc. Only the Angel ECM Suite can interfere with its signals.[3] C3 Boosted systems can be connected into the same network as standard C3 systems, however, interference from any hostile ECM equipment will sever standard components from the network.[5]

The additional hardware links and encryption equipment that allows the C3 Boosted Master to operate increased both the weight and bulk of the unit. The C3BM weighs 6 tons and occupies 6 critical hit slots. It also costs 3,000,000 C-Bills.[4]