Revision as of 08:03, 10 January 2012 by BrokenMnemonic (talk | contribs) (Corrected copy and paste error (whoops - mistook the 1st Canopian Grenadiers for the 3rd Canopian Fusiliers))
(diff) ← Older revision | Latest revision (diff) | Newer revision → (diff)
This article is undergoing revision as part of Project: Planets, a collaborative effort to improve BattleTechWiki's coverage of planets and systems. If you would like to participate, please visit the project page, where you can add your name to the list of volunteers. 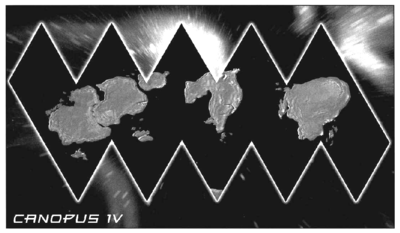 A temperate planet with three major continents, the largest of which was the site of the first settlements on Canopus IV and which the settlers named Salonika. Originally a continent of rolling hills and lush forests, Salonika became host to the three largest settlements on Canopus IV, the cities of Astarte, Crimson and Delphi. In the 29th and 30th centuries large-scale strip mining became commonplace on Canopus, altering the climate of Salonika and bringing much higher levels of pollution. Delphi sits at the edge of the Bay of Altay and originally served as the capital for the ruling Majestrix as well as being home to the first BattleMech producing plant on the planet, Majesty Metals and Manufacturing, although the capital was later moved to the city of Crimson.[2][3][4]

The world of Canopus IV was settled by Kossandra Centralla and her followers. An officer in the Free Worlds League Military, Kossandra and her command had been abandoned on the world of Highspire when her superior officers panicked, and the ineptitude and greed of those above her in the chain of command disgusted her; after she and her unit captured enough transport ships to fight their way back to Free Worlds League space, Kossandra began gathering like-minded followers into her command, which became known as the "Black Brotherhood". When the Brotherhood were sent on an attack into Federated Suns space, they collectively severed ties with the League and set out for the Periphery. Canopus IV was the world that the unit chose to settle on, and in 2531 it became the seat of the new Magistracy Free State.[5] Canopus was captured in 2584 during the Reunification War.[6]

Canopus was active during the so called "phony war" that was fought between various intelligence agencies throughout 2575-2577; agents from the Magistracy Intelligence Ministry, the Marik National Intelligence Agency, the Hegemony Central Intelligence Directorate and the SLDF Intelligence Command were all in play on the world, although the MIM operated with a more coherent approach than the other three services, typified in an incident where two rival SLDF teams engaged each other in a gunfight in the mistaken belief that the other team was a Canopian security team.[7]

On the 14th of May 2577, Duke Brion Marik landed on Canopus and informed Magestrix Crystalla Centralla that a state of war existed between the two realms. Both sides agreed that the war would be fought according to the terms of the Ares Conventions, which made the war unique amongst the four campaigns that made up the Reunification War, but the Canopus system itself wouldn't see combat until 2582.[8][9]

In 2582 the SLDF task force changed tactics and began raiding Magistracy worlds in imitation of the raids being conducted into Free Worlds League space by the MAF. An SLDF WarShip task force raided the Canopus system; the raid wasn't a serious attempt to inflict damage but rather to obtain up to date cartographic information on the system, and the raiding party was driven off by the Canopus naval picket, but it was a prelude to the future invasion of the Canopus system.[9]

By April 2583 Canopus had effectively been encircled, with every major world within 30 light years of the Magistracy capital now occupied by SLDF and FWLM troops.[10] As a precursor to invasion, forces from VII Corps stepped up reconnaissance missions in the Canopus system, leading to a squadron of WarShips establishing a presence in the Canopus system when they seized the nadir recharge station in early March 2584.[2]

As the SLDF began to mount increasingly aggressive patrols throughout the Canopus system the two surviving vessels from the MAF WarShip fleet played a constant game of hide and seek, trying to remain free so that they could evacuate the Magestrix to the redoubt the MAF had established in the outback on Kossandra's Memory. With the superiority in numbers the SLDF possessed there was little the Canopian picket could do to prevent the SLDF patrols, or the establishment of listening posts and then staging areas on the two moons orbiting Canopus IV, Cybele and Inanna.[2]

The SLDF buildup in the system continued throughout March, with the commander of the SLDF task force, Captain-General Marion Marik, arriving aboard her flagship the Albert Marik and taking up a geosynchronous orbit above the capital city of Delphi on the 29th of March. Despite the Magestrix sanguinely dismissing the ship as a "pretty new star", the MAF knew that a full invasion was imminent. After almost fifty years of settlement and economic development Canopus IV was still a largely unspoilt world, with the three largest cities - Astarte, Crimson and Delphi - all located on the largest continent, Salonika. It was an unwritten agreement that the battle for Canopus would be held in the wilderness regions of Salonika, avoiding the various urban settlements, in the same manner that the terms of the Ares conventions had been honoured by both sides to date in the war.[2]

The Star League invasion force took three days to deploy, with the last units landing on the 5th of April. Arrayed against the MAF forces on Canopus were three complete brigades from VII Corps - the 58th, 60th and 62nd Royal - supported by the 35th Royal CAAN Marine Regiment, the 402nd and 403rd Independent Regiments, the 1st, 3rd and 5th Marik Militia, the 4th Brigade of the Fusiliers of Oriente, the 3rd Orloff Grenadiers and the 1st Defenders of Andurien. Although the defending garrison was outnumbered, it consisted of a sizeable number of units - the Magestrix Guard, the 1st and 3rd Canopian Fusiliers, the 1st Canopian Grenadiers and the mercenary unit The Red Hand.[3][11][12]

Despite being outnumbered three to one, the defenders had more knowledge of the local terrain than the SLDF, and they put this into use almost immediately, with the 3rd Canopian Fusiliers attacking the 3rd Marik Militia and the 35th Royal CAAN Marine regiment, pressing both of them hard - particularly the 35th, who were heavily beaten before SLDF reinforcements could drive the Fusiliers back. Elsewhere, the 60th Brigade inflicted losses on the 1st Canopian Grenadiers and the 58th Brigade ground the 1st Grenadiers against the Thetis River, reducing the 3rd to just two companies of troops before they managed to retreat; while the 35th Royal CAAN Marine Regiment was moved into the SLDF reserve force, the survivors from the 3rd Canopian Fusiliers were folded into the 1st Canopian Grenadiers, bringing them back up to strength.[3]

The battle between the 58th Brigade and the 1st Grenadiers wasn't the only battle to take place around the Thetis River; The Red Hand made good use of their hovercraft to navigate the unstable terrain of the river delta and the narrow river channels and launch attacks on the 5th Marik Militia, hit and run attacks that were only stopped when the SLDF deployed fighter squadrons loaded with bombs to hunt the hovercraft, forcing them to retreat.[3][4]

A week after the battles had begun, Marik decided that there was one industrial facility that was too important to the Magistracy war efforts to be allowed to remain under MAF control: the Majesty Metals and Manufacturing complex. The only facility on Canopus capable of producing BattleMechs, the MMM plant would allow the MAF to prolong the conflict if they retained control of it, and despite the tacit agreement that urban combat wouldn't play a part in the conflict between the two forces, the SLDF attacked the MAF garrison at the MMM facility, capturing it on the night of the 12th of April. The MAF forces tried to dislodge the SLDF troops repeatedly over the next few days, but lacked the force of numbers needed; attempts to recapture the facility only ceased when the Magestrix personally called the attacks off.[4]

In late April, the pace and tempo of the clashes increased, and by the end of the month the surviving MAF units had been forced into a tight defensive ring around Delphi. The SLDF lines stretched around three sides of the city, with the Bay of Altay blocking any retreat from the fourth side. The Canopians adopted a siege mentality, bolstered by rumours circulating that rationing would be imposed to support a holdout until the summer, when a relief force would supposedly arrive to help them. The SLDF weren't prepared to let false hope lift the spirits of the defenders, and on the 1st of May the SLDF and FWLM troops pressed the attack against the defenders.[4]

The battle was a grinding war of attrition that inflicted heavy casualties on both sides, and which might have lasted for weeks if it wasn't for the 35th Royal CAAN Marine Regiment. Having been relegated to a reserve role after their losses in the opening days of the campaign, the 35th had used the time to study Delphi and it's surroundings; the beaches around the Bay of Altay would become a tourist attraction after the war, but they also presented the 35th with an ideal opportunity to conduct an amphibious operation. As a Combined Armor, Air and Naval regiment, the 35th was designed to operate on water-rich worlds and to perform such tasks as amphibious assaults, and at dawn on the 2nd of May the 35th assaulted the city from the Bay. The MAF had only light defences on that side of the city, and the organized defence of the city collapsed when the MAF discovered they had an attacking force in their rear areas. Although Colonel Adam Buquoy, the commander of the MAF, managed to escape off-world when the city was finally captured on the 3rd of May, the Magestrix had formally surrendered to General Ian Marik, the commander of the FWLM auxiliary force.[4]

Even with the surrender of the Magestrix and the capture of Canopus, the war would continue; Crystalla Centralla famously refused to order the remaining unoccupied Canopian worlds to surrender with the phrase "Darling, you wanted to take all my people away from me, so if they're being naughty then it's for you to deal with them. Do you want to give them a good spanking? Or me?"[13]

Ian Marik ruled from Canopus as the military governor of the Magistracy until he was recalled to the Free Worlds League by the FWL parliament in 2586, [14] and in 2588 he was replaced by Duchess Melissa Humphreys, the architect of the Star League reconstruction plan for the Magistracy.[15] The city of Crimson was the site of the bulk of the government buildings and infrastructure before and after the Reunification War and during the Star League era it replaced Delphi as the planetary capital.[2]