Difference between revisions of "Clan Wolf" 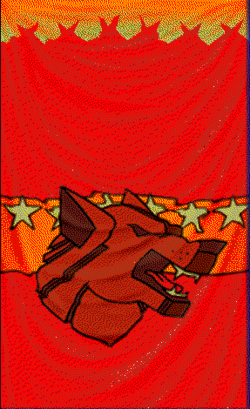 Clan Wolf of the fictional universe of BattleTech is one of the most important Clans.

Clan Wolf was founded by Jerome Winson, brother-in-law of the the Founder of all clans, Nicholas Kerensky in 2810, who also became the member of this clan. The chosen Clan of Kerensky, the Wolves had been a dominant force in the Clans since their beginning. Kerensky named the clan after the Strana Mechty wolf, the creature he saw as the ultimate warrior. This was not the last of the blessings the Founder gave to this clan - he became their leader, and gave the Kerensky bloodname and genetic lineage to them. This greatly shocked the Clan Jade Falcon, and ever since that day there's been tension, rivalry and even occasional wars between the two clans.

Clan Wolf has proved themselves expert warriors: it annihilated the Clan Wolverine and absorbed the Clan Widowmakers, long before their successes in the invasion of the Inner Sphere. They also perfected the Elemental body armor. They led the Wardens in the Grand Council and were the only Clan to oppose the Invasion in 3050. Clan Wolf proposed sending a reconnaissance force to gather intelligence before the Invasion, a force that eventually became known as the Wolf's Dragoons, arguably the best mercenary unit in the Inner Sphere, and crucial in stopping the Clan's invasion.

Although they lost a Trial of Refusal against the motion to invade the Inner Sphere and were selected for the invasion force as punishment for voting against the pro-invasion majority, the Wolves decided to beat the Crusaders at their own game. They participated in it nonetheless and soon outdid all other Clans in seizing more worlds and at a faster pace than any other Clan. Their holdings were mostly taken from the Free Rasalhague Republic and the Lyran half of the Federated Commonwealth. Their capture of Rasalhague cemented their leadership in the Invasion and the Wolf Khan, Ulric Kerensky, became the leader of the Clans, an ilKhan, after their successes. Ulric negotiated with ComStar and some of the Inner Sphere leaders, negotiations which resulted in the proxy battle for Terra (Clan's goal) on Tukayyid in 3052. On Tukayyid the Clan Wolf was one of only two Clans to prevail against the defending ComStar forces, the other victor being Clan Ghost Bear who were awarded a "marginal" victory. Nevertheless, the Wolves were the ones who helped convince the other clans to adhere to the terms when the Trial was lost, leading to the treaty that halted the invasion with a 15-year truce.

In 3057, the Clan Jade Falcons sought to remove Ulric and continue the invasion. When the Council tried Ulric for treason and voted him out of office Clan Wolf all but destroyed itself in preventing the Jade Falcons from breaking the truce by instigating a Trial of Refusal on a scale never before seen outside of a Trial of Annnihilation against an entire Clan. That this particular Trial of Refusal would be forever referred to as the "Refusal War" against the Jade Falcons.

To ensure the Clan's survival, Ulric ordered Phelan Kell (also known as Phelan Ward) to take a contingent of warriors and a cross-section of the other castes to the Inner Sphere while he and Natasha Kerensky sought to break the Falcons. Eventually the Falcon were victorious, but they could not touch the part of the clan that left Clan controlled space and went into self-imposed exile to the Inner Shere. Ward's Warden Wolves settled in Arc-Royal in the Lyran Alliance and guarded the border against any Clan incursions.

An initially successful Jade Falcon attempt to Absorb the remaining Wolves that was effectiviely made moot with the creation of the Clan Jade Wolves by Vladimir Ward, an offshoot of Clan Jade Falcon made up of captured Wolf warriors who were "absorbed" into the Jade Falcons. The Jade Wolves later changed their name by dropping the "Jade" part and simply going by "Wolf", effectively usurping the name of the original or pre-Refusal War Clan Wolf. These Wolves (also known as Crusader Wolves) rebuilt their strength and have declared themselves the only Crusader Clan not bound by the Crusader's defeat during the Great Refusal.

Once the Fifteen-Year Truce of Tukayyid expires in May of 3067, the Wolves will be on the prowl once more. As with the original incarnation of Clan Wolf, the Crusader Wolves consider the planet Tamar as their capital. It was the scouring of Tamar that made the Clans realize that they too would come under attack by the Word of Blake fanatics and had to fight back. During the World of Blake Jihad the Wolves leapt across Jade Falcon borders to assist worlds under attack.

Clan Wolf is also noted for their lack of formality (another thing that greatly annoys the Falcons). While they respect their traditions, they adapt to the situation, they make up their own mind, and don't rush in and think later - a trait that has proven valuable during their invasion of the Inner Sphere, where Clans found that technological edge and mastery of one on one combat is not enough to always guarantee a win.

Clan Wolf emblem is a red wolf head, on top of a red plaque with six golden stars. The five stars symbolis the clans, and the sixth star symbolises their founder, Kerensky.