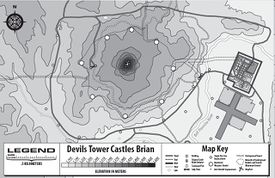 The Devils Tower is an example of a Castle Brian first built by the Terran Hegemony and adopted by the Star League. Built in a remote location on Terra, the Devils Tower fortress is technically a Mini-Castle thanks to its compact scale, but would be no less difficult for an enemy to conquer.[1]

The Devils Tower fortress was originally constructed in the twentieth century as a secret back-up site to the Cheyenne Mountain Complex. Its existence would remain a secret for over a century, thanks to an active misinformation campaign which claimed the base was actually located underneath the Mount Rushmore Monument, before the base was decommissioned. Devils Tower was reactivated during the Terran Hegemony and reinforced to serve as a command operations post, first by the Hegemony Armed Forces and then by the Star League Defense Force. With the fall of the Star League Devils Tower again fell into disuse until it was reactivated by ComStar in the 3030s to serve as a training facility for the Com Guards.[1][2]

When the Word of Blake took over Terra in 3058 they heavily upgraded Devils Tower and turned it into one of their primary combat operations centers during the Jihad. These modifications were unknown to Devlin Stone and his Coalition forces when they began Operation SCOUR, and so Devils Tower was overlooked by their initial efforts to isolate Terra's Castles Brian until Cameron St. Jamais retreated to the Castle. Coalition forces laid siege to the fortress, but when St. Jamais chose to fight Devlin Stone on the open plains east of Devils Tower he was defeated and the surviving Word forces scuttled the Castle, ending organized resistance in North America. Had the Precentor Martial not confronted Stone in open combat it is likely the siege of Devils Tower would've dragged on for months or even years.[2]

The original Devils Tower facility was largely restricted to caverns directly beneath the monument, with two hidden entrances - one in a barn in the nearby town and another in a valley a kilometer to the north. When the Terran Hegemony reopened it they expanded the complex and added a 12km tunnel leading to the nearby community of Hulett, along with three additional sally ports, two in the shadow of the mountain and a third several kilometers to the east.[2][3]

The Word of Blake would make a number of alterations to the original design. Atop the Devils Tower is a command and control bunker, next to which is an anti-aerospace bunker and a ring of heavy anti-aircraft batteries. Eight reinforced weapons bunkers are placed roughly a kilometer out from the Tower, half placed at the twelve, three, six and nine o'clock positions and the other half spaced evenly between these. Gun emplacements are situated every 250 meters along the road surrounding the Tower's hill, on alternating sides of the road, while four gun emplacements are placed within 250 meters of each reinforced weapons bunker directly off its corners. A string of command-detonated minefields also ring the perimeter road. Four large portals allow access to the underground portion of the complex: the two sally ports, one in the location of the former visitor center just west of the Tower and facing north and the other east of the Tower where the road from the town turns south, large enough to handle the Tower's four Rattler mobile structures (the road itself was also reinforced to accommodate the Rattlers), a third one half as tall as the sally ports located just north of the Tower (right off the edge of the above map) and the last one five kilometers to the west in a nearby valley. Each portal is protected by two gun emplacements placed 250 meters in front of them. All of the gun emplacements are also protected by four automated AP turrets placed within 90 meters of their location.[3]

When the Word of Blake took over they also turned the nearby town of Devils Tower into a fortified base. The town is ringed completely by fortified walls, with two automated AP turrets placed every 150 meters of wall length and 60 meters from either side of the wall. Just east of the town are four aerospace hangers, two dedicated to aerodyne DropShips and two to aerospace fighters, with the north-south runway servicing aerodynes and the NW/SE runway for fightercraft, also next to the hangers. Four gun emplacements are located within 250 meters of each hanger directly off the corners and two are located at the ends of each runway, with four automated AP turrets within 90 meters of each emplacement. Two anti-aircraft bunkers are also located on the north and south sides of the airfield.[3]