Difference between revisions of "Hyperpulse Generator" 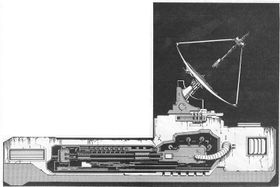 The Star League and ComStar HPG network is based on a simple two-stage system of primary or Class A HPGs (the Prime or First Circuit), and a secondary network of Class B hyperpulse relay stations (the Outer Circuit) determined upon the size the world, and its position, population and importance, with the over 50 Class A stations the network's main hubs and Class B stations located on virtually every Inner Sphere inhabited world. While processed serially, as transmission are expensive, messages are frequently bundled into batches of hundreds to be sent simultaneously. While the First Circuit consists entirely of Class A stations and transmits roughly every six hours, after the fall of the Star League it may be days or weeks before a message is sent from the Class B stations of the Outer Circuit , though one can pay a higher fee in order to send a message sooner. [1] [2] [3] [4]

Messages sent via ComStar and the Word of Blake are charged on per-transmission basis, dependent on how many stations the message must traverse to reach its destination. For example a 1 millisecond message worth 1 C-Bill that must travel via 15 stations would have a final cost of 15 C-Bills. Priority messages however are almost prohibitively expensive, an identical 1 millisecond message sent on a priority basis would be in the range of a 1,000 C-bills per station, with the station of origin also asking for an upfront 5,000 C-Bill for interrupting the normal message schedule. [2]

Due to their relative proximity and small number, the stations of the Clan Homeworld HPG network are all of equal capacity, transmitting to each station within range as required. While utilizing a batch transmission schedule for general communication traffic, the limited size and close-ranges of this network also allow near-instantaneous real-time transmission, albeit with a 1.2 second delay for each station the signal must traverse. [5]

The fixed planetary networks in both the Inner Sphere and Clan space are also bolstered by portable transmitters aboard a small number of JumpShips and WarShips as well as message "buoys", allowing messages to traverse the gaps in and between each network. The most notable example of this was the chains of Clan WarShips and message stations setup to allow near real-time communications between the Inner Sphere and Clan Homeworlds for Grand Council meetings to elect Khans. [6]

The side effects of an HPG include substantial EMP that can temporarily disable battlefield targets. However, an HPG is designed to carefully target objects moving in predictable patterns many light-years distant (i.e., HPGs on other planets) and is thus essentially unable to "attack" battlefield targets. [7][8] 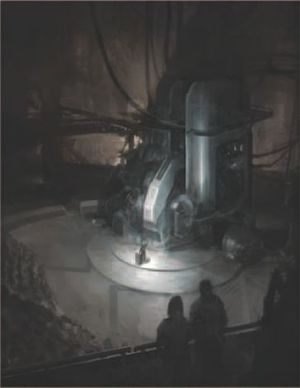 A typical compound has a facade that is aesthetically pleasing, partially to conceal the extent of their fortification. Usually it is surrounded by a ferrocrete wall that incorporates Star League-era surveillance equipment, supported in some cases by concealed minefields. A fusion reactor provides power independent of the local grid, with both it and the HPG housing encased in blast-proof material, and the entire facility can be sealed against the environment. Medical facilities, including surgical theaters, are present in many compounds. Food, water and other supplies kept within storage facilities and elaborate underground tunnel networks - many large enough to accommodate BattleMechs - can allow the staff to remain cut-off from the outside world for up to a year and a half. Escape tunnels also allow ComStar personnel to secretly enter and exit the facility as needed, with at least one connecting to the local ROM safe house. [9]

In 2614, First Lord Cameron appointed Joshua Hoshiko as Minister of Communications. The next year, Hoshiko enlisted Cassie DeBurke, a brilliant young professor from the University of Terra (located near the Court of the Star League), to study the problem further. DeBurke realized that the cost to transmit matter through artificial jump points might be prohibitive, but the cost to transmit bundles of energy - modulated energy, such as radio waves - was within the range of modest reactors. For the next 15 years, Professor DeBurke and her research staff worked secretly and feverishly on her theories. The culmination of their work was the first HPG station, built in 2629 just outside the Court of the Star League, which transmitted the first HPG message on New Year's Day 2630. [3]

By the time of Stefan Amaris’ coup, the Star League Communication Network (SLCOMNET) was at its peak, linking every single inhabited world throughout the Inner Sphere and Periphery, backed up by mobile transmitters aboard many official Terran Hegemony civil-service and military JumpShips and WarShips. With the First Circuit located on the worlds of the Hegemony, the network suffered extensive damage during the Amaris Civil War and among the last decisions made before the collapse of the Star League council was the selection of Jerome Blake as Minister of Communication in 2780, entrusted with restoring the war-ravaged communications network. As the highest-ranking member of the SLCOMNET hierarchy who was not captured or killed during the Amaris coup, Blake’s heroic efforts to maintain communications during the crisis earned him a reputation for integrity. [12]

By 2785, Blake had managed the herculean task of rebuilding the First Circuit, linking the reconstructed A-stations on several key Hegemony worlds, but as the threat of open warfare between House Lords increased Blake recognized the need to prevent the Successor States from seizing the interstellar communications network and misusing it for their own destructive ends. To this end in 2788 Blake seized Terra and reformed the vestiges of the SLCOMNET into ComStar, offering secure interstellar communication to all Successor States that would pledge to respect the neutrality of ComStar's facilities and personnel. The Inner Sphere leaders recognized that open communications were crucial to their survival and agreed to Blake's demands. [13]

With their faith in ComStar's neutrality finally shattered by the actions of Operation Scorpion in 3052, the Great Houses seized control of the HPG stations within their realms. However, initially lacking the ability to run the network they employed the now secular ComStar to do so on their behalf, though the Free Worlds League chose to allow the splinter Word of Blake faction control of the FWL HPG stations. As HPG technology slowly began to disseminate to the states of the Inner Sphere, despite the significant differences between ComStar and the Blakists, the HPG network ran relatively smoothly save for occasional instances of Blakists' propaganda inserted into messages and their eventual seizure of Terra.

However in 3132, the Gray Monday attacks perpetrated by an unknown agent or agents disabled the HPG grid. Roughly 75% of the Inner Sphere's hyperpulse generators were nearly simultaneously destroyed, crippled, or in some other way damaged. Approximately 80% of the A circuit and a large portion of the B circuit were rendered inoperable by a computer virus which used a message cascade to burn out the HPG's transmission core. HPGs with components immune to this virus were attacked by forces unknown. It is unknown why or by whom this was done, but the actions crippled communications. Many important messages are now relayed via "pony express" DropShips to planets without a working HPG. Much like water resources and working factories in the Succession War era, planets with a working HPG have become much more important and vital military targets. It must be noted than the most primitive communication system called Black Box was unaffected by the attacks, and become the only universal and reliable communication system.