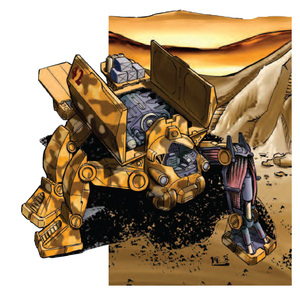 IndustrialMechs, also known as WorkMechs or UtilityMechs, are walking machines which are used for industrial purposes (hence the name). They are similar in shape to BattleMechs, which they predate, and feature many of the same technologies but are built for noncombat tasks such as construction, farming, and policing. IndustrialMechs reached their heyday during the Star League era, but after the start of the Succession Wars their numbers sharply declined as these machines and the factories which built them were cannibalized to repair and produce BattleMechs. The technological renaissance which occurred during the latter part of the 31st century has seen a revival in IndustrialMech numbers as new production lines opened up to meet civilian demand.[1]

The introduction of myomer in 2350 allowed for the development of WorkMechs shortly thereafter; while primitive compared to later examples, these machines revolutionized commerce and industry. As humanity spread amongst the stars, skilled labor was in short supply on many colonial worlds, with WorkMechs stepping in to provide an invaluable boost to productivity. WorkMechs found use in rear-area support for the Hegemony Armed Forces, but the military was interested in adapting the technology for front-line combat. Their work would eventually lead to the introduction of the first true BattleMech, the Mackie, in 2439.[2]

The devastation of the Jihad had a similar effect on revitalizing IndustrialMech production as the people of the Inner Sphere attempt to rebuild their lives once again. It also saw an increase role for armed IndustrialMechs as many poor worlds or those wrecked by the conflict attempt to strengthen their defenses.[1][2]

During the Dark Age after the Gray Monday, armed IndustrialMechs and AgroMechs formed the bulk of many Clan, Inner Sphere or mercenary units.

IndustrialMechs share many of the same components as their more famous BattleMech brethren, though with obvious differences. The chassis uses many of the same principles of construction, but tend to be bulkier, heavier and cheaper. They also come in a greater variety of shapes than the typical humanoid form. Actuators and myomer bundles are also very similar to those used in BattleMechs. Some make use of a fusion engine as their source of power, but still more make do with fission engines, fuel cells and internal combustion engines, especially as these can be significantly cheaper and make use of local fuel sources. Industrial Armor also differs in that it is primarily designed to protect the machine from common workplace accidents - i.e. falling rocks - rather than weapons fire.[3]

The sensors on an IndustrialMech are both less and more advanced than those found on BattleMechs. While ill-suited for general combat use, they can be far more sophisticated and accurate than their military equivalent when used in their specific role: the Magnetic Anomaly Detector on some MiningMechs for example surpass military-grade equipment in their ability to not just locate mineral veins but determine density, composition and other important information. IndustrialMech cockpits also bear many similarities to those on BattleMechs. However, while all IndustrialMechs are equipped with a Gyro to maintain balance, few if any make use of neurohelmets, with the pilots relying on physical controls only.[3]

A notable subtype are armed IndustrialMechs, known as SecurityMechs. They are governed by the SecurityMech Treaty of 2613 and fall somewhere in between civilian WorkMechs and military BattleMechs. The treaty limits their allowed mass and armament.