This article is about the interstellar region. For other uses, see Inner Sphere (disambiguation).

The Inner Sphere is a region of interstellar space surrounding Earth to a radius of roughly 450 - 550 light-years, generally demarcated by the outer borders of the "Great Houses." Within this region of about 2 million stars, there are approximately 2000 inhabited planets. Beyond the Inner Sphere is the Periphery. 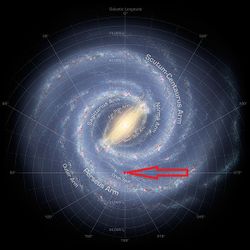 During the next 250 years, civilization was hammered from its 28th Century peak down to 21st Century technology on many worlds and to more primitive states on others - and hundreds of worlds had their populations exterminated altogether. The cause for this warfare was a matter of feudal succession to the throne of the fallen Star League, hence the four wars of this period were called Succession Wars, while the five Great Houses were said to rule Successor States.

Despite hundreds of billions of deaths, the first three Succession Wars resulted in little change to the map after the First Succession War divided the Terran Hegemony between the five Successor States.

The brief Fourth Succession War brought a dramatic change when the Lyran Commonwealth and Federated Suns, on opposite sides of the Sphere, united at the expense of the other Successor States' territories. A number of minor nations appeared in the Inner Sphere during or shortly after the Fourth Succession War, at the expense of the Draconis Combine, the Free Worlds League and the Capellan Confederation.

The political balance of the Inner Sphere changed fundamentally when lost scions of the Star League Defense Force, the Clans, returned to conquer the Inner Sphere and restore the "Star League". The Clan Invasion (3049-3052) nearly destroyed the Free Rasalhague Republic, while the Lyran half of the Federated Commonwealth and the Draconis Combine lost many systems. Though the Clan invasion was halted after the Battle of Tukayyid, the Invading Clans had gained a foothold within the Inner Sphere. As denizens of the Inner Sphere, Clan politics and practices tended to change, reflecting both an increase in affluence (the Clan homeworlds are considered marginally hospitable compared with worlds of the Inner Sphere) and the need to interact with their new neighbors.

The Periphery surrounding the Inner Sphere is home to a few nations of moderate power and many independent worlds cut off from civilization with the collapse of the Star League. The Inner Sphere perceives the Periphery much like modern developed nations perceive the Third World, though some of the major Periphery nations compare well with the weaker Inner Sphere states.

Select the thumbnail image and then the resulting file icon.

Select the thumbnail image and then the resulting file icon.

The text in this article is based on this revision of the Wikipedia article "Inner Sphere" used under the terms of the GNU Free Documentation License. See the BattleTechWiki's copyright notice.
Retrieved from "https://www.sarna.net/wiki/index.php?title=Inner_Sphere&oldid=719932"
Categories: