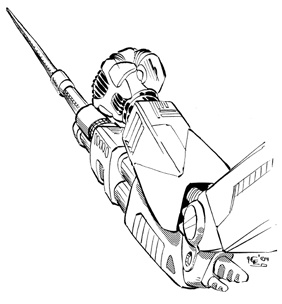 The BattleMech Lance is a special melee weapon designed to pierce armor plating. Unlike the medieval weapon of the same name, the Lance is a long, thin spike that juts out from a 'Mech's arm; it is not a large spear-like weapon carried in the hand. In combat the Lance pierces the armor plating of an enemy unit, possibly damaging or destroying internal systems.[1]

Though used in the Solaris Games, the Lance has not yet been seen in actual combat.

In game terms, the Lance can be mounted by BattleMechs and IndustrialMechs in the arms. Each arm can carry one Lance. The Lance requires a single critical slot for every fifteen tons the 'Mech weighs. It inflicts one point of damage for every five tons the 'Mech weighs. In addition, if armor remains after a Lance attack, the attacker should roll 2D6. On 10+ a single point of damage is applied to the internal structure. Roll for a critical hit at a -2 modifier. A Lance that hits an unarmored location has the usual chance for inflicting critical hits.[2]

A Lance's battle value is equal to the damage it inflicts.[3]