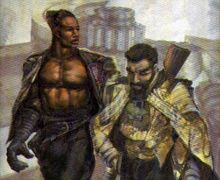 Lincoln Osis (3014[1] – 23 April, 3060[2], aged 46 years) was a Clan Smoke Jaguar Elemental who became Khan of his Clan during the invasion and later became the last ilKhan of the Clans. He presided over the death of his Clan when the Smoke Jaguars were pushed out of the Inner Sphere and were annihilated on their homeworld of Huntress. Osis himself was killed by Victor Steiner-Davion on Strana Mechty in 3060 during the Great Refusal.

We will crush the Inner Sphere until they are but smoke and dreams. - from The Invading Clans, 3058