Difference between revisions of "Nueva Castile"

Nueva Castile is a small proto-state residing within the Deep Periphery. Though its territory has fluctuated over time, Castile possesses a region of space roughly seventy-five light years in diameter, situated 150 light years coreward from the Hanseatic League and 200 light years anti-spinward from the Clan Jade Falcon colony St. Jean. More than 200 years of continuous warfare and shared history has inextricably bound them to the Umayyad Caliphate, even resulting in the intermingling of some bloodlines. Though Castilian and Umayyad society has evolved together, there are still many differences.[citation needed]

Nueva Castile started as an early, pre-Star League era colony. The first settlers were Iberian, and landed on the world of Castile in 2392. These settlers established a feudal agrarian society. A total of nine planets were settled: Aragon, Asturias, Castile, Córdoba, Galicia, Granada, León, Navarre and Valencia. Due to the great physical displacement between Nueva Castile and the Inner Sphere, the realm lingered in peace and isolation, unaware of war and foreign politics for over 400 years.

The history of this region of space changed fundamentally in 2830, when a single JumpShip arrived in the Granada system. This JumpShip transported a group of refugees, armed with heretofore unknown technology, including BattleMechs. It is unknown where these invaders came from, or even if the invaders were aware of their origins, but their significant technological advantage resulted in the conquest of Granada. The native Castilians dubbed these invaders the "Umayyads", a reference to the Islamic empire that invaded the Iberian peninsula around 1½ millenia before. The name stuck. Despite the small numbers of Umayyad forces, the Umayyad Caliphate quickly conquered several more worlds. By 2855, only the world of Asturias remained free from the Umayyad conquest.

The Umayyad conquest of Nueva Castile would have been completed were it not for infighting resulting from the division of the spoils. As a result, Castilian forces commanded by Ferdinand Rodriguez were able to capture a BattleMech in 2857. By 2862, the Castilians had reverse engineered the technology and were fielding many primitive Internal Combustion Engine-powered 'Mechs, enough to turn the tide of war. Between 2862 and 3062, the Castilians gradually liberated most of their worlds, first Castile and León, then Aragon, Navarre, Galicia and Valencia. Only two worlds remained in Umayyad control, the disputed world of Córdoba and the Umayyad capital Granada.

The 230+ year war reached a cease-fire when operatives working for the Word of Blake revealed to both parties outside powers had been conspiring to prolong the conflict, aiding both sides in such a way as to prevent either from achieving a complete victory. Since this revelation, both parties have ceased full-scale war, and have actually begun a process of reconciliation.[1]

In 3080 Clan Goliath Scorpion was Abjured and forced out of the Clan Homeworlds. They invaded systems held by the Nueva Castile and Umayyad Caliphate, and formed the Escorpion Imperio.[2] 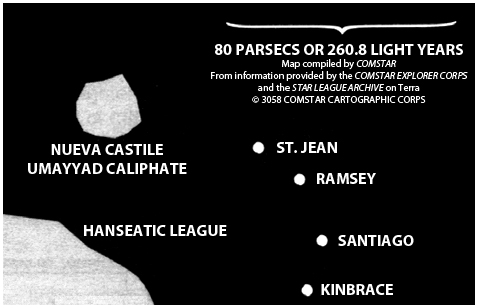 Originally agrarian, Nueva Castile learned martial practices from their Umayyad rivals, and are obsessed with ousting the Umayyad "interlopers". However, Castilians have ignored the Umayyad emphasis on learning, high culture, art and science. Castilian society is a martial, feudal system within a "techno-barbaric" people. Upward mobility in society is largely unheard of; class and birth status dictate one's position. Further, higher echelons within society wield absolute power over the underclasses. Much like the original Umayyad invaders, the liberation of many Castilian worlds has led to infighting and feuds. Assassination is a widely-used political tool within the royal courts and the military.

Nueva Castile is ruled by a King. The King is an elected office, but once the position is attained, it is not relinquished until death. The King is chosen from among the ruling Príncipe. As a single person isolated from society, the King really only wields power among the Príncipe. The king mediates disputes, but as the Príncipe are a lower class, the King is able to do what he will, including execute anyone for any infraction.

Nueva Castile learned the art of warfare from the Umayyad, so they fight in much the same way. They maintain a large combined arms military supported by small units of BattleMechs. In the field, the army fights as lances of infantry, combat vehicles and 'Mechs. These units fight as mixed companies. Castilian technology is roughly equivalent to that of the Inner Sphere in 3025. As at 3075 Nueva Castile is the only nation known to still be operating Manatee-class 'Mech-transporting DropShips.[3]

Rank within the Castilian military, like everything else within Nueva Castile, is based on hereditary status. Feuds, disputes and assassination are common place. The military is centrally commanded and supplied, with both roles ultimately controlled by the King. Therefore, it is of great importance that the sovereign is not offended, or this may lead to some (very) dangerous assignment, a lack of war materiel, or simple summary execution. In fact, each rung within Castilian society wields the same absolute power over all the lower class. All of these factors conspire to make the Castilian military nowhere near as effective as its numerical superiority (over the Umayyad) would indicate.

Castilian dress is a dark red jacket and black trousers. A (not so ceremonial) pistol or dagger is commonly worn on a sash tied around the waist.[citation needed]

As Castilian society is martial in nature, military and civilian ranks are interchangeable.

In 3025 their forces are calculated to be around twenty Armor Regiments bolstered by two BattleMech regiments that operate in Battalion size formations.[4]

Later, the Castilian military was composed of 24 regiments (two of which are 'Mechs). 'Mech assets are grouped in commands of battalion size or smaller, and generally never take the field in significant numbers.

Each brigada within the Castilian military is generally arranged in the same fashion - 6 combined arms regiments with one or more individual, attached 'Mech battalion-sized (or smaller) commands.

Castilian policies towards outsiders have been traditionally cordial as they sought outside intervention (and even trade) to gain the decisive advantage required to conquer the Umayyad. The Hanseatic League, unbeknownst to Nueva Castile, used this state of affairs to their advantage. The League effectively shaped the course of recent Castilian/Umayyad history by brokering mercenary deals and supplying arms in such a way as to prolong the strife. It was not until the late 3060s that the true extent of this interference was realized, though both sides only recognize the Hansa as free traders. The Castilians believe that Inner Sphere powers, specifically the Lyran Alliance, not the Hanseatic League, meddled in their domestic affairs.

Since the revelation that outsiders have secretly meddled in Castilian politics, relative peace has endured with only small raiding parties occasionally drawing blood, and there are signs the two nationalities may be uniting. Further, a large influx of recruits have responded to the desire for vengeance against the Lyran Alliance. However, centuries of mistrust make it unlikely the Umayyads or the Castilians will ever be able to mobilize against a Successor State.[5]

In 3067, the King of Nueva Castile, King Joseph Noye, is described as cruel, ruthless and paranoid.[citation needed]