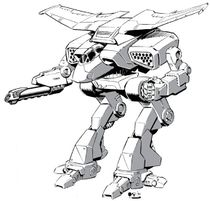 First designed by Clan Jade Falcon in 3061 and entering production in 3067, the partial wing system offers increased jump capability comparable to the improved jump jet system, but also increases the rate of heat dissipation. Not to be confused with the Land-Air 'Mech concept, the partial wing is a fixed-wing system that allows a 'Mech to glide an additional 60 meters when using normal jump jets. In addition, its large surface area allows a 'Mech to more efficiently radiate excess heat. The technology was later adapted for use in ProtoMechs by Clan Blood Spirit starting in 3063 and entering production by 3070.[1]

Designed for use with BattleMechs, IndustrialMechs, and ProtoMechs. It cannot be used on Land Air 'Mechs[citation needed] or on Glider ProtoMechs.[2] Ultraheavy ProtoMechs are assumed to use the same rules for mounting Partial Wings as Clan BattleMechs.[2]

In standard atmosphere, the Partial Wing adds +2 Jump MP, and an additional 3 heat dissipated per turn.

The weight of the system (Clan Techbase) is 5% of the 'Mech's weight (7% for Inner Sphere, 20% for ProtoMechs)[3] and rounded up to the nearest 0.5 ton. It occupies three critical spaces in each side torso for BattleMechs, and one weapon slot in the torso for ProtoMechs.[4][1]