This page in a nutshell:

On BattleTech Wiki, articles are usually created when Editors create and make changes to an article until all parties involved are satisfied with the product. While it is not explicit, these bold Editors are coming to a consensus on what is appropriate to include and how to phrase it through these edits. While this is the preferred method of crafting an article, occasionally two or more Editors disagree on an aspect of an article. This can lead to an edit war, which is not a desirable outcome.

In order to avoid this, Editors must discuss the changes on the talk page of the article in question. There, all interested parties can comment on the way to move forward.

By editing on BattleTech Wiki, you agree to abide by the consensus decision. Any further revision to an article against the consensus of Editors after it has been reached may be considered disruptive and cause to be blocked from editing.

Consensus is achieved when a reasonable amount of time has passed for all interested parties to have their say and a clear majority decision is reached. Where possible, compromises should be made in order to ensure that the article is as satisfactory to everybody as possible. Consensus also works within the policies and guidelines that have already been set down. If one or more Editors feel that policy needs to be changed, that discussion should talk place on the appropriate policy talk page, but an article should not violate policy until such time as an official policy change takes place.

Not all Editors need to agree on any given proposal. Consensus needs only a majority opinion, not a unanimous one, though having the most people sign on to a given change is desirable. Consensus is not, however, a democratic vote, so polling should be the absolute final resort.

Consensus is not immutable. Past decisions are open to challenge and are not binding, and BattleTechWiki Editors must realize that such changes are often reasonable. Thus, "according to consensus" and "violates consensus" are not valid rationales for making or reverting an edit, or for accepting or rejecting other forms of proposal or action.

BattleTechWiki remains flexible because new Editors may bring fresh ideas, growing may evolve new needs, Editors may change their minds over time when new things come up, and we may find a better way to do things.

A representative group might make a decision on behalf of the community as a whole. More often, Editors and Administrators document changes to existing procedures at some arbitrary time after the fact. But in all these cases, nothing is permanently fixed. The BattleTech universe changes, and BattleTechWiki must change with it. It is reasonable and indeed often desirable to make further changes to things at a later date, even if the last change was long ago.

How to go about achieving consensus[edit]

There are at least two appropriate methods to achieve consensus:

Oftentimes, an Editor seeks guidance from the community before taking action, whether he is unsure what the correct direction/policy is or because the action may appear to be too bold. In that case, he solicits discussion on what he feels is the most appropriate talk page for that subject or by personally contacting previous Editors of the article in question. The interested parties chime in with their opinions and it is not unheard of that a completely different Editor takes the helm and makes the bold change.

Pros to this method include ensuring the community generally agrees with the action before it occurs, lessening the chance for hurt feelings (though emotions are NOT a criteria for determining importance or consensus) and that the article will be strengthened overall in the community's eyes. Cons are that -due to the large size of BTW, the diverse locations of its editors and their differing posting times- a discussion may take a lengthy amount of time before a consensus can be reached or that the discussion may not even be concluded at all, as it may peter out from either decreasing interest or simply being lost in the shuffle. One way to help shorten both the time necessary to reach consensus and to increase the pool of interested parties is to advertise the discussion on the Chatterweb. (Seek out an Admin to get this issue neutrally posted in this Main Page section.)

Another method to achieve consensus is a three-part process: Be Bold (i.e., make a change), Edit (watch to see if another Editor responds with further changes) and Discuss (take it to the talk page and attempt to find a compromise). 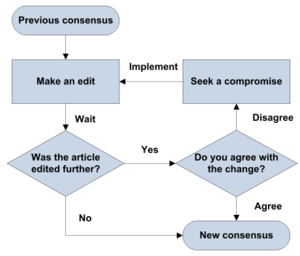 This method assumes consensus, rather than waits for it to rear its head. It works from the premise that the article of interest, as it currently exists, enjoys consensus amongst all interested parties, which must be the reason for the current state of the article. However, if enough time has passed, and accepting that consensus can change, an Editor approaches the article with a different or modified idea of what should be incorporated within the article. In the first step of the B-E-D process, this Editor acts boldly and makes the change.

The second step has the first Editor monitor the article in its new state, to observe if another Editor may make an edit. If the new edit modifies the last edit, the first Editor has now identified an interested party. The affected section may now no longer have consensus.

If this is the case and the first Editor disagrees with this newer edit, he approaches the second Editor (whether on the article's talk page or on the user's) and makes an attempt to reach a compromise or an agreement. This would involve discussion. A reasonable amount of time should be allotted (with the understanding that 'reasonable' is relative) before the first Editor determines the second may no longer be an interested party. In that case, he is free to revert the edit. If at any time the reversion is challenged, that indicates the discussion phase is in play and all attempts should be made to reach a compromise. Again, if discussion does not continue but peters out, it can be assumed new consensus has been reached according to the interested parties' last edit.

Most importantly, for the B-E-D method to be successful, respect for other Editors' opinions, along with an allowance for a fair amount of response time, must be maintained.