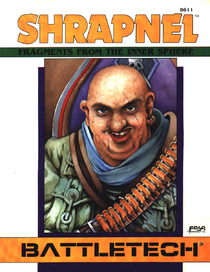 Shrapnel is a collection of graphic artwork and short stories set in the BattleTech universe in the "Classic" era between 3025 and the Fourth Succession War that begun in 3028.

Besides an introduction from Jordan K. Weisman and various pictures, the book contains the following stories:

Trev-R is an old Solaris arena MechWarrior and down on his luck when he happens to save Vayil Oonthrax, son of Baron Irvxx Oonthrax, in an ill-reputed area of Xolaris City. The boy turns out to be a fan of Trev-R and aspires to become an arena MechWarrior himself, so he secretly enlists Trev-R to train him. Long before he is ready to fight, young Oonthrax receives an Atlas and a heavily rigged battle is arranged where bribes and sabotage are to ensure the boy's victory, while his opponent is set up to lose the fight and quite possibly his life. Only a few days before the event does Trev-R find out that none other than he himself is the useless old veteran who is going to be sacrificed by Baron Oonthrax and Arena Master Kandar Kant. His very life at stake, Trev-R feverently prepares to turn the tables in his favour. If he lives, this may be his last chance to make a profit and get off the Gaming World.

(by Tara Gallagher and James Lanigan)

The Black Cats, an all-infantry mercenary unit, defend a city against a rather unprofessional BattleMech company posing as the Black Widow Company and prove that even infantry can down a 'Mech with ingenuity and some luck.

This story was previously published as an introduction in the CityTech rulebook.

Tormana Liao is the enstranged son of Maximilian Liao, Chancellor of the Capellan Confederation. Having married Hanya No Cha, who was born on Brazen Heart, the secret prison colony in the Sarna Commonality, he has constantly failed to please his father or at least live up to his expectations, and has consciously stopped trying by now. During a public parade on Liao on 10 January 3026, Tormana fails his last chance to reconcile with his father despite the urgings of his elder sister Candance and his godmother Chandra Ling. He also inadvertedly insults the father of a Davion regimental commander working for Michael Hasek-Davion during the event. Tormana explains that he only wants to be a soldier, and has no political ambitions despite everbody assuming the latter simply because he is a Liao.

He then transfers back to the planet Kali in the Algol system where he serves with the Ariana Fusiliers. A message with the Brazen Heart emblem is slipped under his door, calling him to come alone to coordinates some sixty kilometers from the base. Enroute in his Vindicator, he even wonders if he might be walking into a trap when another Vindicator appears and remotely deactivates Tormana's 'Mech. The other pilot explains that he has been surgically altered to take Tormana's place as a Doppleganger on Maximilian Liao's orders, but suddenly they receive a radio transmission from a Davion strike force that has secretly arrived on the planet. Since the atmosphere is not breathable, both will die if their base is destroyed and they have to cooperate to save the base, and themselves. They agree on a truce: Tormana provides the secret passwords to his ComStar trust accounts and other personal information while the other man reveals his Maskirovka connections and passwords. Thus, if the Doppleganger lives, he can take Tormana's identity; if Tormana lives, he can pose as his own Doppleganger to avoid being murdered.

Using Tormana's intimate knowledge of the barren planet and its peculiar natural anomalies, the two men proceed to prepare an ambush for the Davion force but they have to remember that they are mortal enemies at the same time, as only one of them must return to their base alive.

This story is told in a series of flashbacks during a honor duel to the death between Chu-i Salvadore Tyrell and Sho-sa Victor Garreth:

Tyrell's Raiders had been a Kurita auxiliary force of company size under the command of Salvadore's father, attached to the Second Benjamin Regulars as auxiliary reserve troops on the planet of New Wessex. The Bataillon commander, Sho-sa Victor Garreth, had ordered the company to guard an important river crossing against a Steiner force of equal strength. The attacking force turned out to be not a Company, but a heavy Regiment, and crushed the defenders in short order, killing Salvadore's sister Theresa in her Shadow Hawk and forcing Salvadore to eject from his Centurion which was also destroyed.

Upon returning to his base on foot after three days in the wilderness, Salvadore Tyrell found the survivors of his unit had been hanged for cowardice in the face of the enemy for alledgedly retreating from a fight with roughly equal numbers, after having suffered only light damage, against explicit orders. Their BattleMechs had become property of the Second Benjamin Regulars.

Dispossessed and with no options, Salvadore returned home to plot his revenge against Victor Garreth, the treacherous commander. Almost a year later he was contacted by Duke Hassid Ricol and hired to create the Red Duke's personal 'Mech company which he came to call "Tyrell's Terrors" after his father's 'Mech (a Dragon). After Ricol's return from a venture in the Free Worlds League a meeting was finally arranged on Kajikazawa where Salvadore finally had the chance to confront Garreth.

And then there was the time...

While an Slayer AeroSpace Fighter pilot boasts about his exploits, namely a dogfight with the Stuka of Karl Stephens and how he could have shot him down, the rather bored and distracted thoughts of his female attendance provide a stark contrast to his story.

(by Elizabeth T. Danforth and Michael A. Stackpole)

Military mail traffic consisting of short orders and brief reports illustrates how Snord's Irregulars embarrassed the Second Free World Guards on an extraction raid to the Kincaid peninsula on McAffe in 3020 despite being expected to raid the facility. In this raid they reclaimed various pieces of art previously lost House Marik.

Tracy Maxwell Kent is a Phoenix Hawk pilot with the Gray Death Legion. During a raid on Shionoha she commands the light 'Mechs of the training cadre (two Locusts, Stingers and Wasps each) on a recon mission that stumbles right into a strong enemy force and find themselves surrounded. The resulting engagement will later be celebrated as the Victory at Mifune Pass for the Legion, but it is an ordeal to teach Tracy what it means to take command.

Where lies the Honor?

(by Tara Gallagher and James Lanigan)

The race is not to the swift

(by Michael A. Stackpole)