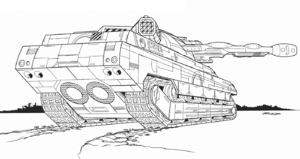 Myrmidon in the skirmisher unit role

Skirmisher is a battlefield role performed by certain models of 'Mechs, as well as other ground units. These units are primarily considered suitably mobile, armed, and protected to directly engage with the enemy and are situated between scouts and brawlers on the combat spectrum.[1][2][3]

Skirmishers are considered to be 'Mechs suitably adapted to a fluid combat environment, due in part to their weaponry, armor and speed, able to directly engage the enemy well enough to inflict appreciable damage. Their flexibility allows a battlefield commander considerable leeway when compensating for both tactical situations and local topography. They are often utilized as a partner to slower or lighter 'Mechs (such as strikers), engaging the enemy while the other unit maneuvers to complete the mission. They are also assigned deep recon missions, where probability of return is too low to be acceptable for lighter 'Mechs.[1][3][4]

Though appropriate for breakthrough scenarios, when opposing an enemy closing in or conducting a siege, skirmishers are not well-suited in direct assaults. Their firepower is lacking when engaging a defensive heavy or assault BattleMech, especially closing over considerable amounts of ground. When used in such assaults, they must be supported by snipers or missile boats, and generally can then take on a heavier target with ease. They often command lances of (slower) strikers. The skirmisher role can be fulfilled by ProtoMechs, medium-sized tanks, hovercraft and VTOLs, though BattleMechs are the preferable platforms.[1][2][4]

In Alpha Strike, a unit is identified as a Skirmisher when it meets the following standards:[2][3]
Speed: Fast
Armor: Medium-Heavy
Range: Medium
Special: no requirements