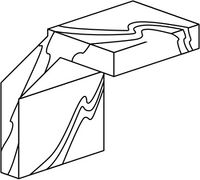 Discovering detailed information on the system in the archives of the reactivated Star League era Shengli Arms factory, while not yet able to produce a bolt for bolt, circuit for circuit replication, with typical Capellan ingenuity House Liao developed a stopgap solution suitable for mass-production. Integrating the heat baffles and required components directly into specially designed armor plating, when linked with a Guardian ECM Suite Stealth Armor replicates the benefits (and disadvantages) of the Null Signature System. [2] Though bulkier than the Null Signature System that inspired it, Stealth Armor is still less bulky than ferro-fibrous armor.[3]

Two years after introducing their BattleMech Stealth Armor, the Capellan Confederation began experimenting with stealth armor for combat vehicles. In 3067 the armor reached the experimental stage.[10] Bizarrely, it has only been seen in widespread use on the Word of Blake's Bolla Stealth Tank[11], though it can be fitted to any vehicle or AeroSpace Fighter. By 3084 advances in armor production for the Inner Sphere would allow this class of Stealth armor to enter limited mass-production and rerate it as Advanced Technology.[12]

Stealth Armor is manufactured on the following planets: