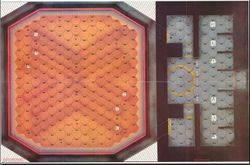 The Stadium offers three tiers of seating for its capacity of 44,000 spectators. Private booths and box seating provide the most direct views of the Stadium floor, with tickets going for 100 and 75 C-bills respectively, with the addition of either Tri-Vid or high-resolution flatscreen monitors for replay viewings. These seats are not as luxurious as those found in the Jungle, but nevertheless cater to the needs of the well-to-do fan and provide an unparalleled view of 'Mech combat. General seating for 40,000 is available for 20 C-bills a ticket, and while not given as best an angle as the box seats the sloping arrangement of the cushioned seats still provide excellent viewing. Replays and stats are displayed on large-format flatscreens inside the ferroglass shielding while a variety of concessions and facilities can be quickly accessed through the combination horizontal/vertical elevator system.[1]