Straw Boss began playing Battletech in 1994. He once destroyed a MechWarrior Online dev by abandoning his Starmates during a skirmish with an assault lance. He fired 8 medium lasers from his Hunchback into the developer's Cataphract with no regard paid to the friendly units in close proximity that did most of the work...It was his proudest moment.[2]

Several years prior to this glorious incident he loaded his Mad Dog A with Inferno Missiles; fired them all at once destroying an enemy Catapult, a full point of friendly Elementals, and his Mad Dog. It was pretty neat.[3]

Straw Boss continues to perpetuate his futile attempts to build a Clan Ghost Bear Cluster, remake the Star League, and annihilate Clan Wolf (in that order).[4][5] 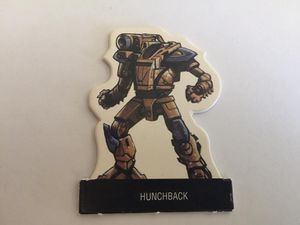 Straw Boss acquired his first Mech in the early 1990's. A poisonous lead Hunchback IIC that has undergone several modifications including a machine gun boating phase, five different color schemes, an accumulated several months in turpentine baths, and an extensive downscaling operation that saw fractions of millimeters removed from every vertical measurement to bring it into scale with it's Starmates.[6]