Another GenCon has come and gone, and now is the time when those of us who attended and participated are recovering from and reflecting on our personal and shared experiences of one of the most exciting weekends any gamer could hope to have.

This GenCon was my third in total, over a period of the last four years, and each time I have felt like it was impossible for me to somehow enjoy this time more than the last time. I believe that it is an amazing thing that, so far, each new GenCon experience has surpassed the previous ones. I think this is in part due to a continuous learning process that all repeat convention goers should, if they pay attention and mean to improve their future experiences, go through.

I left home near Nashville, TN at 7am Thursday morning, and a little over five hours later, I arrived in downtown Indianapolis. After finding a parking garage only a short walk from the convention center, I proceeded to Will Call to retrieve my pass. The wait was not long, and the process was smooth. I would be surprised at this point if Will Call was a difficult process at GenCon, but I feel that I need to include my assessment in order to provide an accurate picture of the convention from my perspective.

I have here chronicled my GenCon 2015 experiences in two parts. Part 1 details my BattleTech centric experiences, and Part 2 covers my general GenCon experience and my thoughts on how to have a better convention experience in the future.

My first priority is always the Catalyst Game Labs booth, and this year was no exception. The beta release of the long-awaited Interstellar Operations book was something I was very keen to see, purchase, and devour. But that was not to pan out as I wished. I received crushing news upon inquiring about the book that all copies had been sold out! Less than three hours after opening, the book that I was most interested to get at this GenCon was gone, and that was that. 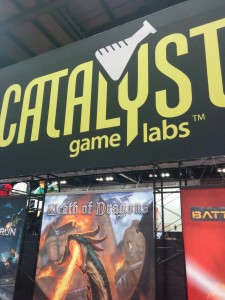 Here’s the thing about that kind of disappointment: It does not endure when you are on the vendor hall at GenCon. I can buy the Interstellar Operations PDF, which will be updated to the final production for free if purchased from either the BattleCorps or DriveThruRPG websites. While I had missed out on one piece of BattleTech history, I soon realized that I was in the presence of so much more.

Technical Readout: 3150 sat beautifully on a shelf, several actually, and I selected the copy that would become mine within seconds of making it through the crowd and to the table. TRO:3150 is a very interesting product. Designed to be our first glimpse into the situations that develop after the walls of Fortress Republic come down, I have only just begun mining the depths of the information that are held within this tome. While the majority of the units contained within debuted in the TRO:3145 series, there were a few new entries and pretty much every entry contained updated information of some kind, usually in the form of new notable pilots. 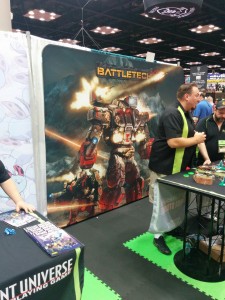 I also checked out the updated printed Alpha Strike cards. A new addition to that product line included a set of 3039 and 3050 cards that were packaged as an introductory experience for Alpha Strike. I did not pick up any of the card packs, but they looked great and should help many more players get into the game.

I knew that faction dice were making their first reappearance in the Catalyst booth in many years, and I secured four Clan Ghost Bear dice. I do wish that the major invading Clans had been included in the factions that received metal dice sets, but I understand both the logistics and nostalgia behind only the five Houses being available in metal.

The surprise finds in the Catalyst booth included lapel pins and factions patches. I picked up a Ghost Bear lapel pin to become a companion to my vintage Reaper produced Ghost Bear pin from the 1990’s. I also picked up a Northwind Highlanders lapel pin and a Clan Ghost Bear patch. These kinds of things are my favorite kinds of things to find in a convention booth. Collectible status without incurring backbreaking “exclusive” prices that usually accompany short run items, now that’s the stuff I gobble up. 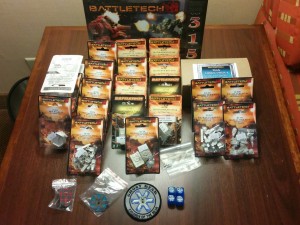 A look at some of the items I got at the Catalyst and Iron Wind booths.

The last find in the Catalyst booth didn’t come until my return visit on Saturday. A BattleTech playmat should serve me well as I play games that require one and represent my favorite hobby, hopefully opening the door to let me talk to other gamers about BattleTech. I may be asking too much of a playmat, but only time will tell. 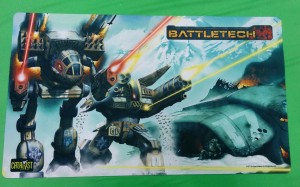 One special thing that I want to mention about the Catalyst booth is that I was able to meet Amy. Amy takes care of a lot of the behind the scenes stuff at Catalyst, and I learned that while Randall Bills is to thank for getting the faction dice together, Amy is who we can all thank for making the faction patches and the lapel pins happen. So yeah, big thank you Amy at Catalyst. You helped make this GenCon a much better place to be. 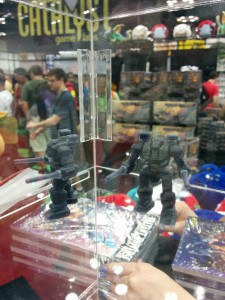 The crowning glory of the Catalyst booth had to be the glass display case that housed several prototype models for the new Warhammer that Catalyst recently unveiled as the first in a line of redesigned Unseen BattleMechs. This redesigned `Mech is a seriously amazing model. I spoke to the CamoSpecs guys later on Thursday, and they were working on painting a couple of the models up. Catalyst is as excited as we are about these new designs.

After I did all the damage I could do at the Catalyst booth, I made my way over to the Iron Wind Metals booth. This was the true playground of the vendor hall for me. They had several model cases stuffed full of both painted and unpainted examples of their latest models and con exclusives. 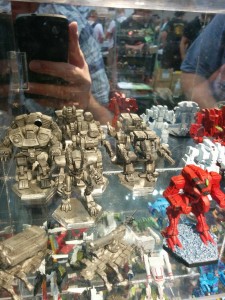 I don’t need to give you a play-by-play of my time in the Iron Wind booth, but I will say that I was impressed by the new sculpts, especially the ones in the Republic Lance Pack that they released for GenCon. I took several pictures of the display models they had scattered throughout the booth, and there were definitely some notable models. 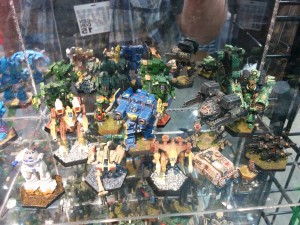 The most notable point of my visit to Iron Wind’s booth was when I decided to take a leap and experience a personal first. I bought a DropShip. 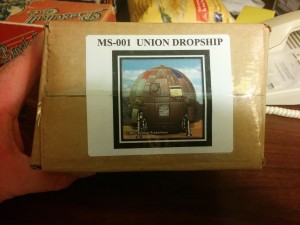 It was the basic Union DropShip, perfect as a center piece for my XII Hastati Sentinels Company, but I fear that I may have unlocked a new dimension for my BattleTech collection. If one unit has a DropShip, what’s to stop me from getting DropShips for all the other units? Only time will tell if a monster was created at GenCon this year.

This year’s Camo Specs diorama, which was on display in the gaming hall next to the Alpha Strike gaming area, was an impressive sight. Based on a fight during the Succession Wars in which all of the Great Houses took part, there were units from all over the Inner Sphere represented. 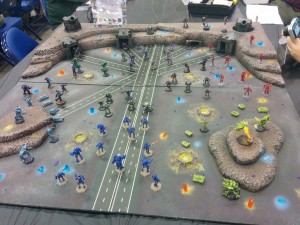 There were several standouts among the units, including a pre-release version of the new Highlander mini. This thing is impressive. I was told that there were a few production issues with the mini as it was, so the sculptor was fixing the minor issues before Iron Wind Metals puts it into production. 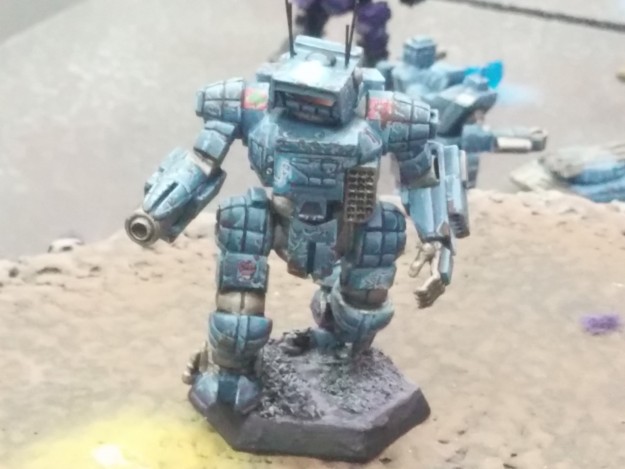 I helped fund this particular model, so I was very happy to see it and even more excited to hear that its release will be soon.

Below are more pictures of the diorama. 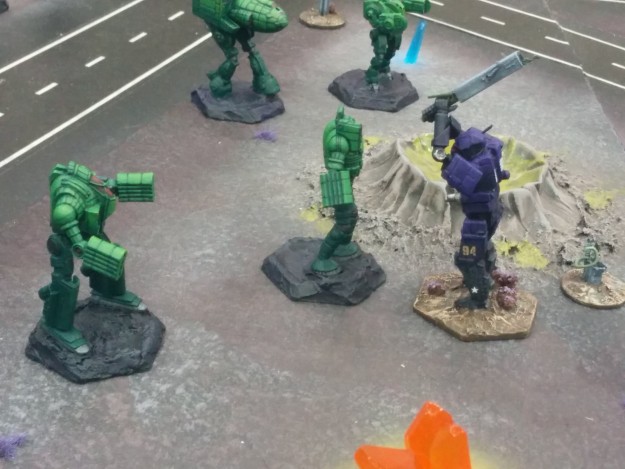 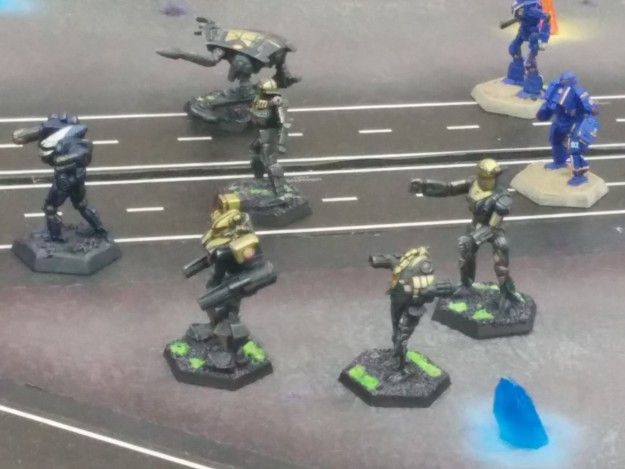 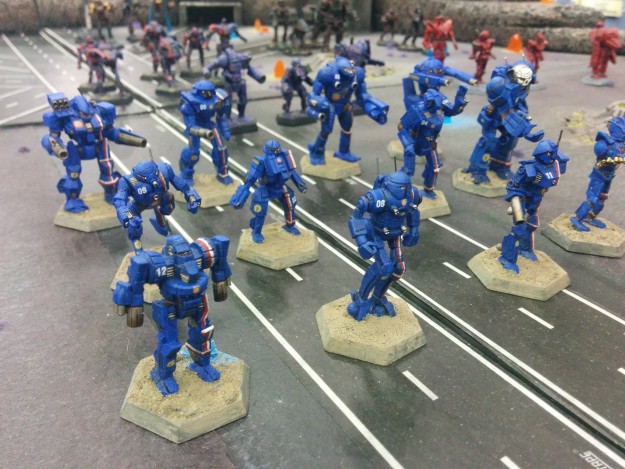 The BattleTech Experience: The Pods

It has become a tradition for the BattleTech Firestorm Pods to be the last thing that I do at GenCon. I did not purposely start doing this, but it just always has worked that way for me every time. 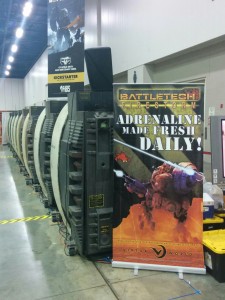 The Firestorm pods are based on a custom build of MechWarrior 4, so while the graphics aren’t necessarily up to the standards of the modern MechWarrior Online, it really does little to detract from the experience of sitting down inside the cockpit of a BattleMech. 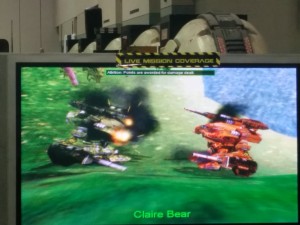 I went in for four drops. All in a Kodiak. It was marvelous.

All of the drops were in various arena style environments, and I couldn’t help but think that they featured a distinct lack of Duncan Fisher announcing the action live. 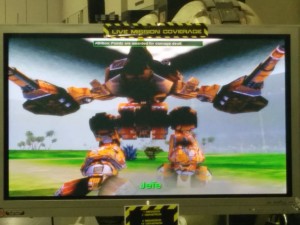 The action was a bit more high octane than I remembered, with the visceral action of turning a control stick and jamming a throttle stick to full in order to launch my 100 ton BattleMech into action.

Of all of the things you can experience at GenCon, the Firestorm pods are at the top of my recommendation list. 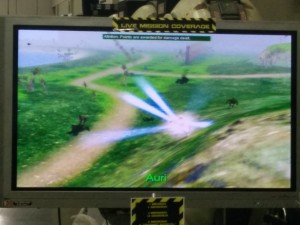 The one tabletop game I signed up for during the con was an Alpha Strike Rampage game. I ended up controlling a Lance of Capellan `Mechs alongside two other fellas against a Company of Kurita BattleMechs. 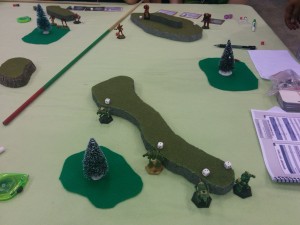 Not being a fan of either faction, I decided to just cause as much disruption and chaos as possible during the game. 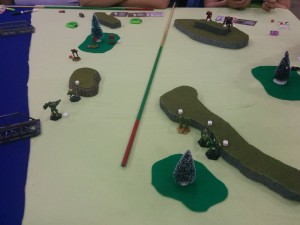 My Men Shen was a surprisingly effective chaos perpetrator and is the standout for me in the game, and really the only thing I remember. 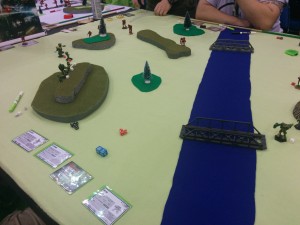 I watched several other games than my own as well, and I have to say that convention gaming is some of the most action-filled you can experience. I heartily recommend signing up for at least one game if you ever make it to GenCon. 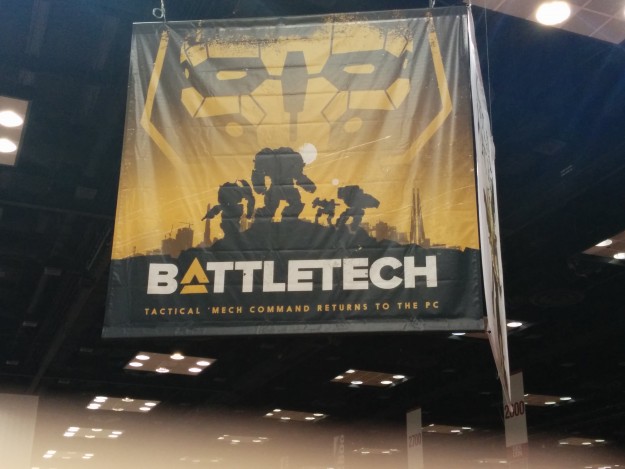 I’m sure most of you have seen by now that the creator of BattleTech, Jordan Weisman, is returning to the IP. While I had other reasons to visit the Harebrained Schemes booth other than BattleTech, I was happy to see that they were offering GenCon attendees a chance to become Vanguard Backers of the upcoming Kickstarter for the BattleTech computer game they are set to produce.

They offered two levels for Vanguard Backers to pledge, one at $10 and one at $50.

For $10, a Vanguard Backer received one random pair of dog tags and will receive a special Firestarter BattleMech in the game.

For $50, a Vanguard Backer received the entire set of 10 pairs of dog tags and will receive both the Firestarter and a special Atlas chassis upon release of the game.

This was too much of an opportunity for me to pass up, so the $50 level was my only real choice.

Also, it allowed me to take the picture below and show you all what the entire set of dog tags included. 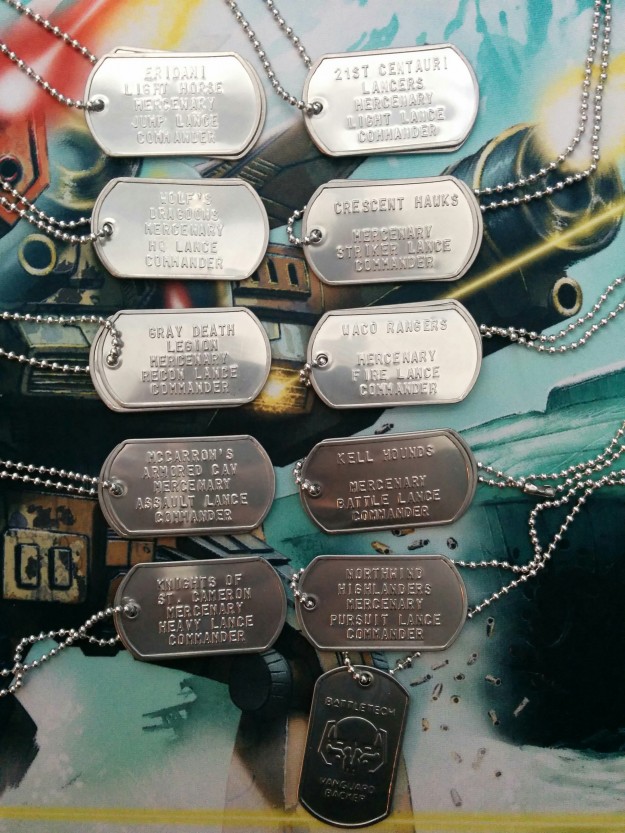 If Harebrained’s treatment of Shadowrun is any indication as to their dedication to an IP, I would say that every BattleTech fan on Earth should be on the edge of their seat in anticipation of this game. I know I’m even more pumped because of the enthusiasm on the faces of the HBS people at GenCon.

This ends my BattleTech experience at GenCon 2015. In Part 2, I share my general experiences and my closing thoughts on the convention as a whole.