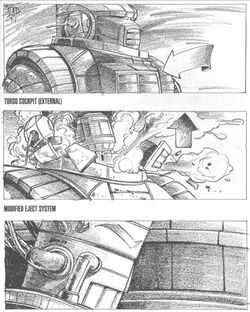 The Torso Cockpit has long been a dream of BattleMech designers. By moving the MechWarrior to a more heavily protected area, an army would be able to keep its more experienced soldiers in the fight a lot longer. The idea remained a dream until the unlocking of the Helm Memory Core provided a jump-start to many technological projects.

In 3044 the Federated Commonwealth started the Dark Mirage project, which was directed by Burke Kale. Though the team was able to create a prototype Torso Cockpit, limitations made it very unpopular and the project had been all but terminated by 3054. The key limitation was the inability for a MechWarrior to eject from a 'Mech equipped with a Torso Cockpit, but the cramped conditions made piloting more difficult, and proximity to the 'Mech's engine also affected MechWarrior performance.

The Torso Cockpit gained a reprieve in early 3055 however, appearing on several arena 'Mechs from Solaris. The additional sensor package allowed an arena pilot to keep fighting after head destruction, and the short nature of the engagements mitigated the hot conditions and lack of creature comforts. In addition, the nature of arena combat reduced the need to eject from a crippled 'Mech.