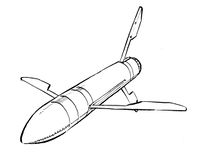 The Air-Defense Arrow Missile, also called ADA Missile, was an alternative Arrow IV Artillery missile invented by the Capellan Confederation for use against aerospace fighters. Development of the ADA Missile began in 3066, followed by an experimental prototype design and initial production in 3068. It was field-tested by Capellan forces during Operation SOVEREIGN JUSTICE and later used to combat the Word of Blake, however only Death Commando units have been observed using these experimental systems.[1]

Only ground- or naval-based units with an Arrow IV launcher may use ADA Missiles to attack any airborne unit within 2 hexes (or 2 ground mapsheets) and no higher than 8 Altitude on the Low Altitude Map. ADA Missiles follow the same rules for standard flak attacks found in Total Warfare but consider attacks within the same hex/mapsheet as short range, 1 hex/mapsheet as medium and 2 hexes/mapsheets as long. Units firing ADA Missiles may make no other secondary attacks against other ground targets.[1]