The Word of Blake was a splinter faction of ComStar that was created out of a conservative backlash against the removal of ComStar's mystical and religious aspects. The Blakists initially took refuge in the Free Worlds League, but were able to move most of their operations to Terra after they conquered it in 3058. They perpetrated the Jihad in 3067, which ended with the defeat of the Blakists in 3081 and the reintegration of the remaining Blakists back into ComStar.

Upon the defeat of the Clans at Tukayyid at the hands of ComStar, Precentor Martial Anastasius Focht returned to Terra to confront the then-Primus Myndo Waterly about her Operation Scorpion, an attempt to turn the entire Inner Sphere over to the Clans. Focht shot Waterly in the back due to her perceived insanity.[citation needed] Focht later had ComStar archives say it was a cerebral hemorrhage. Word of Blake intercepts, however, truthfully state that Focht had her killed giving the reason he wanted to secure the power of her position. One week later, the First Circuit elected Sharilar Mori, Precentor Dieron, as Primus with Focht's backing.[1] Mori strongly favored making ComStar a more open, secular organization rather than the quasi-religious order that it had been in the past.

In protest, Demona Aziz, Precentor Atreus and a member of the First Circuit during Operation Scorpion, under the perspective that Focht staged an illegal coup d'etat, left Terra with her staff and a cadre of followers that agreed with her traditional interpretation of Jerome Blake's works.

Meeting with Thomas Marik on Atreus, she convinced the Captain-General to grant her followers sanctuary in the Free Worlds League. Using ROM agents loyal to her, Precentor Aziz sent messages to every HPG station across the Inner Sphere, inviting all ComStar members who rejected the new ways in favor of the old to join her in exile. As ComStar refugees flooded into the Free Worlds League, Marik granted the Word of Blake splinter group a land hold on the world of Gibson. 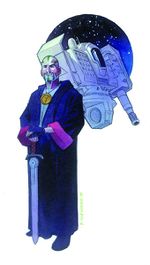 The Blakists took over the administration of the HPGs in the League, as well as the Capellan Confederation a few years later. They used this considerable income from the stations, and the time, to train their forces.

Planning for the recapture of Terra began in 3057, when the Blakists sensed their opportunity due to the instability stemming from the Capellan-Free Worlds League assault into the former Sarna March. They were able to move their forces well within striking distance of Terra.

This preparation all paid off for them in 3058 when the Blakists conquered Terra in what they called "Operation Odysseus". This was achieved partially through trickery and partly through outright military force, as the Blakists had many sympathizers on Terra who covered up the Word's assault fleet until it was too late. In addition, the Blakists had managed to smuggle a sizable force onto the planet in disguise as the 21st Centauri Lancers, a mercenary regiment whom ComStar had just contracted. At the same time, the Word also dispatched forces to Venus and Mars. The conquest was complete months later when Precentor Klaus Hettig switched sides and brought the Titan Naval Yards into Blakist control. ComStar's Precentor Martial, Anastasius Focht, declined to attempt a liberation of Terra because he believed the Clans to be a greater threat.

After the conquest, the Word set about securing HPGs in the Chaos March, often engaging ComStar in running battles for the stations that resulted in the disruption of interplanetary communications. The Blakists generally took a propaganda approach that made sure of appearing to help the local communities, which in turn made the locals more receptive to the Word than to ComStar.

The Word of Blake took a real step toward legitimizing itself in the eyes of its detractors in 3064 when Thomas Marik nominated the Word for full Star League membership. They took this a step further in early 3066 with the creation of the Word of Blake Protectorate, a half-dozen Chaos March worlds that all banded together under the Word's aegis. They were contested, however, by the formation of the Allied Mercenary Command (AMC) on 07 March, 3066 by Jaime Wolf, whose implicit goal was stopping Blakist expansion in the Chaos March.[2][3]

This situation came to a head in 3067 when the Word sponsored an insurrection of disaffected mercenaries on Outreach, led by Jaime Wolf's sworn enemy, Wayne Waco of the Waco Rangers. The early morning attack, which included the detonation of fuel-air explosives over the barracks of the Home Guard, took Wolf's Dragoons by surprise. Though they took a heavy toll, the Dragoons were able to rally and crush Waco's mercenaries. The Word also blockaded the Northwind Highlanders, another key member of the AMC, on their home world, Northwind.

At the Fourth Whitting Conference of 3067, the Capellan Confederation, Federated Suns, and Lyran Alliance all announced their intentions to withdraw from the Star League. First Lord Christian Mansdottir called for a vote of no-confidence, with the hopes that the measure would pass and they could force the dissenting member-states to stay. The vote failed however, even with the hasty admission of the Word of Blake and the Taurian Concordat. With the vote of no-confidence, the Star League disbanded. However, many Blakists believed in the interpretation of a prophecy that foretold they would come to power through the League, so they were understandably upset when it ceased to exist just as they were to have joined.

The Blakists resorted to threats to cajole the former Federated Commonwealth states to rejoin the League. Blakist WarShips appeared in the Tharkad and New Avalon systems simultaneously on December 5th, 3067,[4][5] bearing threats if the nations should not rejoin the Star League. When they refused, the WarShips opened fire and dispatched ground troops. The Blakists expanded their assault to include almost every power in the Inner Sphere. They attacked, and were responsible for some factions assaulting others, in an orgy of destruction that was their Jihad until 3081, when Devlin Stone's coalition was able to defeat the Word of Blake on Terra.

By 3132 they are effectively reduced to a footnote of history publicly, but Blakist cells still remain active in ComStar, especially in ComStar's ROM espionage and clandestine operations wing. The most notable of these groups was a Neo-Blakist faction inside ComStar, who even built his own ComGuards, under the name, Buhl’s Blessed Order. After the establishment of Fortress Republic, the now enclosed state hunted and destroyed every dissident group inside the walls. Among the first and most notable of these would be the renegade ComStar's elements. Elements of the Republic forces would end up pursuing ComStar forces to their hidden outpost on Epsilon Eridani and destroying them on their last stronghold in 3141.[6]

The many opposing factions and sub-sects of the Word of Blake were far too factional to be able to unite behind the First Circuit system that ComStar used. Instead, the Ruling Conclave was composed of the heads of the four largest factions and the Precentor-Martial. [7]

All Word of Blake factions agreed on a few points. They decried ComStar and its members as heretics for defying the ancient doctrines claimed to be in the writings of Jerome Blake. They denounced as forgeries the recently discovered writings of Blake and mourned ComStar as being destroyed from within, claiming that salvation was only possible by fleeing from ComStar's "corrupted vision" and joining the Word of Blake.

As most of ROM defected with Aziz, the Word of Blake was observed at every level by ROM. They sought out ComStar infiltrators and "disloyal" members, dealing with them as they saw fit.

As of September 12, 3067, the Ruling Conclave of the Word of Blake consisted of the following members:[9]

The five factions significant enough to have earned a place on the conclave are as follows:

The smallest faction on the conclave, they felt that over time Jerome Blake's word had been corrupted and might need revision in some areas, though not to the same extremes that caused the Word of Blake to split from ComStar originally. They approached dangerous, even heretical ground with their beliefs in the view of the other members of the conclave. [7]

When Victor Steiner-Davion became Precentor-Martial of ComStar in 3062 many officers and officials who had remained in the order in the hopes of reversing the reforms carried out by Focht saw that the organization was unable to be redeemed. They left for the Word of Blake and became the Expatriates. The Expatriates often threw their weight behind the True Believers, until 3065 when many of its high-ranking members were unmasked as ComStar agents. In the light of this betrayal, the Expatriates effectively ceased to exist as the rank-and-file members of the sect switched their allegiance to other factions.

Named after the fanatical Conrad Toyama who triggered the religious transformation of ComStar, the Toyamas are the most radical faction on the conclave and among the most splintered. They believed that Blake’s truth must be spread to the rest of the Inner Sphere by any and all means available, openly launching terrorist attacks against the Inner Sphere and even targeting other factions to enhance their own position on the conclave. The bulk of the most fanatical and terrible acts of the Jihad were committed by the Toyamas.[7]

One of the moderate factions on the conclave, most of the True Believers wished to come to an understanding with the rest of the Inner Sphere and Secular ComStar. Though generally non-violent, they were not pacifists. They felt that the Word of Blake should unify before it led the Inner Sphere to the truth, often attempting to play middleman in the struggle between Blakist factions.[7]

The least vocal but most-unified faction, the Shunners interpreted the Schism and works of Jerome Blake to indicate the destruction of the Inner Sphere was imminent. They believed the Blakists had to isolate themselves and ride out the destruction. Already openly critical of the Word's relationship with the Free Worlds League, the faction's members moved en masse to a refuge dome on Venus in 3059 (after the seizure of Terra). The bulk of the Shunners were killed after another faction sabotaged the machinery maintaining the dome's atmosphere. While a few survived, the faction no longer had the numbers to remain on the Conclave and its position was taken by the Expatriates.[7]

The Word of Blake Militia began its life at slightly more than four divisions of troops, the Blake Guards, which retained the standard Com Guard numbering and were primarily tasked with defending Gibson. The Militia was twice that size in 3058, when the Word took Terra from ComStar and added another two divisions shortly thereafter. By the beginning of the Jihad in 3067, the Militia is rumored to contain over forty divisions.[10]

With the formation of the Word of Blake Protectorate, Cameron St. Jamais established an additional series of units to garrison the worlds. The Protectorate Militia members were drawn from local worlds to free up the Word of Blake Militia divisions for offensive operations.[11] These troops were later part of an uprising against Terra, apparently at the instruction of the Master.

The third armed force available to the Word of Blake consisted of the Manei Domini-led Shadow Divisions. These thirteen divisions were led by Precentor Appollyon and answered directly to The Master. Their appearance was totally unexpected and their tactics threw the armies of the Inner Sphere into serious confusion.

A detailed list of some WoB manufacturers and company centers.