The Word of Blake Jihad was a major interstellar war that involved all major factions. The opening salvo was launched in October 3067 against Wolf's Dragoons on their homeworld of Outreach.[1][2] The war lasted until the Word of Blake's defeat in 3081, which was made possible through unifying efforts of Devlin Stone and David Lear, using their gathered coalition forces to crush the new Blakist Hegemony.

The Word's strategy mainly consisted of attacking capitals and other, important industrial worlds to hamper their enemies' capacity to wage war. They created a "white-out" of the HPG grid that forced regional leaders to take a more active role, then manipulated those leaders to create chaos and warfare that distracted their enemies from the Word's activities. During the early parts of the war, the Blakist "hidden" armies hit former Chaos March worlds in the vicinity of Terra. This led to the formation of the Word's new nation, the Word of Blake Protectorate.

The Jihad was not comprised only of the Word of Blake assaulting foreign powers, but also conflicts that erupted between neighboring states. Of note were the fights between the Free Worlds League and Lyran Alliance, Capellan Confederation and Federated Suns, Federated Suns and Draconis Combine, Clan Snow Raven and their allies in the Outworlds Alliance fighting both the Federated Suns and Draconis Combine, and the ongoing conflict between the Marian Hegemony and Circinus Federation. 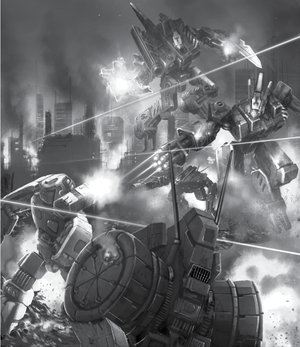 Mech Battle during the Word of Blake Jihad.

The following is a listing of military operations conducted by various factions during the war. They are listed in order of dates of operations. Some operations occurred against in opposition to each other and are listed together.

On 21 August 3072, combined-arms units of Clan Nova Cat engaged in battle with the Word of Blake in the Nagasaki community zone within the Crane district on Luthien.[7]