The St. Ives Compact was a minor Inner Sphere nation that existed from 3029 to 3063.

The Compact was formed in 3029 as a direct result of the Fourth Succession War. Duchess Candace Liao, firstborn of Chancellor Maximilian Liao and his heir, fell in love with Justin Xiang Allard, a Federated Suns spy who had infiltrated the Capellan Confederation's spy agency the Maskirovka. Rather than stay in the Capellan Confederation with a double-agent who helped conquer a third of her home nation, she fled and took the St. Ives Commonality with her. In addition, Candace feared the reign of her father, who was descending into insanity.[3][4]

Given the destruction the Capellan Confederation Armed Forces suffered at the hand of the Federated Suns, they were unable to do much about the St. Ives secession, though Capellan loyalists did their part. A full-fledged rebellion took the capital of St. Ives, Tian-tan. Knowing that her family would show no mercy, Candace organized her forces and fought back with the help of Suns intelligence agents. Candace and forces loyal to her won back control of the capital world in less than a month. CCAF attacks on civilian targets served to disrupt the small nation since the Confederation lacked the military might to go to war. To further protect her fledgling nation, Prime Minister Candace allied with the Federated Suns, who provided military protection.[5][6]

The 3030s and '40s were an era of peace for St. Ives, despite the efforts of the Federated Suns. First Prince Hanse Davion wanted to annex the Compact, much as he had done with the Tikonov Free Republic. In 3031 Candace refused to allow the Armed Forces of the Federated Suns to use the Compact as a staging area, even going so far as to threaten to aid the Confederation by sharing the plans for invasion. Hanse backed down and never again tested Candace Liao.[7][8]

When news of the Clan Invasion reached St. Ives, it was unknown exactly who was attacking. At the time, Kai was a member of the Armed Forces of the Federated Commonwealth and the unit he was in was rotated to the Clan front. Kai earned distinction in the Battle of Twycross when he destroyed an entire Clan Jade Falcon unit almost single-handed.

The leaders of the Inner Sphere were called to a conference on Outreach to coordinate strategy with the others in 3051. There, Jaime Wolf revealed that the Clans were in fact the descendants of the Star League Defense Force that was led into exile by Commanding General Aleksandr Kerensky in 2784. In order to aid their Federated Commonwealth allies, Duchess Candace authorized the First St. Ives Lancers to help against the invasion.[9][10]

After they had returned from Outreach, a Capellan assassin that had been sent by Chancellor Romano Liao attempted to kill Candace and Justin. The assassin only succeeded in wounding Candace, but Justin killed the assassin before he succumbed to his wounds. Candace traveled home to Sian and killed her sister Romano and the presumed father of Romano's children, Tsen Shang. Rather than assume the throne herself, she allowed Romano's eldest child, Sun-Tzu Liao, to become Chancellor.[11]

The Clan Invasion was halted in 3052 by the Truce of Tukayyid, well before Clan troops neared the St. Ives Compact.[12]

In 3059 Protector Jeffrey Calderon ordered the Taurian Concordat's embassy to St. Ives to investigate the possibility of an alliance. This was done in response to the treaty that the Magistracy of Canopus had signed with the Capellan Confederation.[13] However, before anything could come of this, Jeffery Calderon was killed in the New Colony Region uprising on Detroit. The Taurian Concordat would join the Trinity Alliance shortly after.[14] 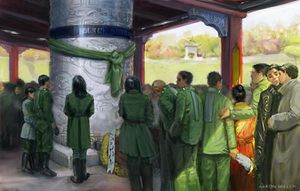 In 3060, Chancellor Sun-Tzu determined that the time was right to reclaim St. Ives. Due to poisonous family politicking in the Federated Commonwealth, a new regime under Katherine Steiner-Davion had come to power that was much less sympathetic to St. Ives. Also, Sun-Tzu had been elected First Lord of the new Star League and he used that power to its greatest effect.[15]

A Capellan spy had infiltrated the St. Ives military, and, under her authority as a battalion commander, she launched an unprovoked assault against the Capellan Confederation. This was actually a plot by Sun-Tzu to make St. Ives appear the aggressor. Sun-Tzu called in Star League Defense Force peacekeepers, but some members of the St. Ives military attacked them, believing it to be the next step in a Sun-Tzu plot. This played perfectly into his hands, as it continued to portray St. Ives as the aggressor.[16][17]

In 3061, at the Second Whitting Conference, the Star League member nations voted to withdraw peacekeepers from the Compact. Sun-Tzu simply replaced the SLDF troops with Capellan forces. Though Compact military forces fought hard, they could not stand up to the full might of the CCAF without unlimited support from their Federated Commonwealth ally. Candace decided that defending the entire Compact was impossible, so she decided to defend the "southern," larger half of the crescent-shaped nation and abandoned the capital of St. Ives.[16]

Soon enough, Candace and Sun-Tzu agreed upon a peace that was largely negotiated by Kuan-Yin Allard-Liao and former ComStar Precentor Martial Anastasius Focht. This agreement called for the Allard-Liao family to retain the St. Ives Commonality as their landhold and for St. Ives to have a slightly greater say in military matters than any of the other Commonalities. With those compromises in place, the St. Ives Compact was officially reintegrated into the Capellan Confederation in 3063 as the St. Ives Commonality.[18][19]

Duke George Hasek II, ruler of the Capellan March, used his nation's abrogated commitment to the Compact to justify an invasion of the Capellan Confederation. In early 3068, Mandrinn Kai was abducted (willingly or unwillingly) by The Bounty Hunter and brought to the capital of the Capellan March, New Syrtis. There, Duke Hasek announced Operation SOVEREIGN JUSTICE, the codename for his invasion. Rogue St. Ives Commonality home guard forces declared for the Compact with help of March mercenary units.[20][21][22]

Hasek launched a three-pronged attack, with the goal of securing a buffer for the Compact to reassert its independence. The invasion was initially successful, and March troops were but one jump away from the Capellan capital, Sian. In late '68, a WarShip launched a blistering bombardment at the Forbidden City that killed Candace Liao and drove Sun-Tzu Liao into hiding, though he was initially thought dead. The attack was initially blamed on the Armed Forces of the Federated Suns, though it may have been perpetrated by the Word of Blake. Nevertheless, the attack galvanized the Capellan people and even drove Free Capella to reconcile with the Confederation and join them against the Suns.[23][24]

The Capellan Confederation Armed Forces had driven the March troops back to the border when Sun-Tzu made his seemingly miraculous reappearance, along with a plan to strike back at Hasek. Capellan troops surged across the border and invaded such important worlds as Taygeta and New Syrtis. By this point, the dream of independence for St. Ives was dead and Kai had been returned to the Confederation. Only a Word of Blake sneak attack in 3070 brought the Capellan troops back as they were recalled to defend another border.[25][26]

The St. Ives Military Command was never large, commanded by a Senior Colonel. Similar to the CCAF, the SIMC was divided into provincial directorates, the commanders of which sat on a council chaired by the deputy military commander. It consisted of the prestigious St. Ives Lancers, the workhorse St. Ives Armored Cavalry, and the newer St. Ives Janissaries (a unit that was modeled on the Ceti Hussars). SIMC doctrine was an amalgamation of strategy and tactics from the Capellan Confederation Armed Forces and the Armed Forces of the Federated Commonwealth. The SIMC also maintained the St. Ives Academy of Martial Sciences on St. Ives. The only major military academy in the Compact, SIAMS, was designed to train officers for the SIMC.[27]

For its entire history, the St. Ives Compact was ruled by Prime Minister Duchess Candace Liao. Though it was divided into duchies, the small size of the nation necessitated little delegation of authority.