Sian is the modern capital world of the Capellan Confederation, noted to be the best defended planet of House Liao.[27] It's home to many of House Liao's major industries and political leadership.

In 2367, in Age of War, the Confederation's capital was transferred to Sian after Capella was devastated by a planetary bombardment.[28][29]

Alone among the Star League member state capitals, Sian did not allow a garrison of the SLDF on world. This was due to the Confederation's dislike and continuing paranoia regarding the Star League forces and their intentions.[30] 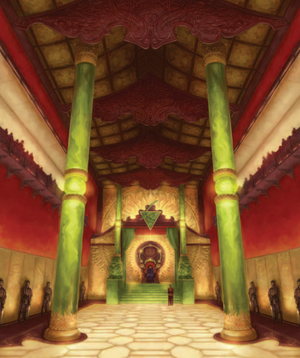 The Liao Throne Room on Sian.

Joshua Wolf, the brother to Jaime Wolf, would negotiate the contract that brought Wolf's Dragoons into the employ of the Capellan Confederation in 3010. The Dragoons' first stop in the Confederation under their new contract was a visit to Sian before moving on to their new base in the Wright system.[31][32]

In 3029, the Uhlans used the ID of the Rangers to get to Sian. They reported, that they caught Morgan Hasek-Davion. The Chancellor had bold dreams with the Davion prisoner, but during the last phase of the landing, the DropShip fired at the waiting machines of House Imarra. The 'Mechs were only ready for ceremonial duties, and the gas of the missiles burned the newly invented Triple Strength Myomer of the House 'Mechs with ease. The Kathil Uhlans landed and waited long enough for Justin Xiang Allard, the spy, to get to the spaceport and make it save home, back to the Federated Suns. This event was too much for the ruler of the Capellan Confederation and he descended into madness.[33]

The Bombardment of the Forbidden City[edit]

During Duke George Hasek's war against the Confederation in 3068 WarShips believed to belong to Haesk's Davion forces raided Sian space and bombarded the Forbidden City from orbit on the 7th of October. The bombardment resulted in the disappearance of Chancellor Sun-Tzu Liao, believed to have been killed. Also lost in the bombardment was the "captive" Duchess of St. Ives, Candace Liao. These events led to Sang-jiang-jun Talon Zahn declaring himself Military Regent of the Confederation whilst Liao forces rallied and began a counterstrike against Hasek's forces.[34] It took until the first week of December for Magestrix Naomi Centrella to successfully rally the troops from the Magistracy Armed Forces on Sian after the bombardment and resulting chaos, but on the 20th of December the Chancellor was found within the remains of the Forbidden City and recovered alive and well from the rubble.[35][36]Sang-wei Peter Lo appeared in front of the press to inform the citizens on this.[37]

The First Battle of Sian[edit]

In mid-September 3070, a Word of Blake invasion force assaulted Sian in an attempt to occupy the planet. The assault force was led by the WoB's 24th and 17th Divisions, aided by several mercenary commands, including the Dragon's Breath and Grandin's Crusaders.[38] However, House Liao forces prevented the majority of the lead elements of the invasion force from landing.[39] As ground troops landed on Sian, Blakist WarShips were engaging Capellan WarShips in the Sian system,[40] and the Aegis-class WoBS Herald of Retribution was destroyed during the conflict.[41]

Despite the Blakist's attempt to lure the defenders out of position at the city of Beilin, the defenders refused the bait. Instead the 3rd Canopian Fusiliers and elements of the Death Commandos were able to smash the attackers.[42]

The invasion forces finally managed to land and push into the ruins of the Forbidden City. They engaged the Red Lancers and Warrior House Imarra. This grinding combat was favoring the Blakists until something unexpected happened:[43] Colonel Warner Doles of the Blackwind Lancers arrived with his regiment to rescue the Chancellor from the Blakists at the cost of his own life. The final result of the battle was a victory for the Capellan forces.[44]

On the 21st of August 3073, the former Captain-General of the Free Worlds League, the "false" Thomas Marik arrived on Sian; his goal was to negotiate a ceasefire between the League and the Confederation. Word of Blake operatives attempted to disrupt the negotiations by attempting to assassinate the former Captain-General, but Capellan security forces thwarted the Blakists efforts. Word of Blake assassins would attempt to strike on Sian again in October the same year; as Magestrix Naomi Centrella-Liao prepared to board her DropShip back to the Magistracy of Canopus a freak fuel explosion at the Forbidden City spaceport destroyed the DropShip. It was some time before the freak explosion was ultimately attributed to the Word of Blake, however,[45][46] and Naomi wouldn't actually leave Sian for Magistracy space until February 3075.[47][48] Naomi would return to Sian over a year later, returning on the 30th of March 3076 under a joint escort from the Capellan and Duchy of Andurien armed forces.[49][50]

On the 30th of November 3073 Death Commandoes arrested Duchess Kali Liao on Highspire, and transported her to Sian to be presented to the Chancellor. Kali Liao was presented to Sun-Tzu Liao on the 28th of December, and formally charged with collaborating with the enemy and treason.[46][51]

The Second Battle of Sian[edit]

Over the course of the years since the first battle, the Word of Blake inserted troops covertly onto Sian. These forces secretly built up for a second attempt at seizing the planet from the Capellan forces, while conducting a low-key guerrilla campaign against Capellan forces on the planet prior to the second battle. Death Commandos finally discovered a series of hidden Blakist bases in 3074; Liao forces began to try and eliminate these staging bases, but ultimately failed. The Blakist commanders, fed up with House Liao's continued resistance, activated their allied special forces in the form of Kali Liao's Thuggee Warrior Houses, dispatching the cultists to augment the Blakist troops on Sian. The rogue Warrior Houses combined with two Divisions of Word forces moved to take the Palace, and nearly succeeded; however, one of Kali Liao's Warrior Houses, the White Tigers, unexpectedly and inexplicably turned on its fellow cybernetically-enhanced allies and annihilated them. This turned the tide of battle for Sian's defenders, ending the struggle to take Sian.[46][52][53][54]

In the closing years of the Jihad the capital of the Capellan Confederation was rebuilt, with the exception of a few ruins left in place in memory of those who died during the Word of Blake assaults on the planet. Foreign intelligence agencies believed that the Confederation had undertaken measures to prevent future invasions of Sian, including the implementation of an SDS based around sub-capital weaponry, but hadn't confirmed details of the defenses by 3079.[2]

Sian has four major landmasses; Liaoning "The Walrus", Wuhan, Imarra, and South Home. The planet's environment consist of lush jungle and tropical environments, which have been placed under restrictive developmental protection.[73] 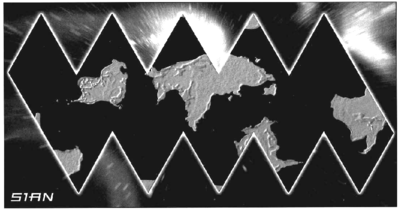 The original House Liao sourcebook listed the year 2468 as year Sian became capital of the Confederation. This was changed by later publications.[79]