Sun-Tzu Liao son of Romano Liao and grandson of Maximilian Liao, became one of the greatest Chancellors of the Capellan Confederation and the First Lord of the reborn Star League.

Son of Romano Liao, Sun-Tzu Liao became Chancellor of the Capellan Confederation after the assassination of his mother in 3052. Shortly thereafter, he became engaged to the daughter of Free Worlds League Captain-General Thomas Marik, Isis. Fully aware that the engagement was purely political in nature and would eventually prove moot because of the circumstances of Isis' birth and Marik's attempts to bear another heir to his throne, he began looking elsewhere for allies/pawns he could use. Sun-Tzu also was partly responsible for the Marik-Liao Offensive of 3057 against the Federated Commonwealth after discovering the death of Marik's son and replacement with a double by Prince Victor Steiner-Davion.

Years later when focus again shifted towards the threat of the Clans, Katherine Steiner-Davion nominated Sun-Tzu First Lord of the newly formed Star League. As part of a plot to have herself elected, she assumed her brother Victor Steiner-Davion would argue against Sun-Tzu's nomination just because she had made it, and therefore she would end up nominated, having secured votes for herself beforehand. When Victor saw through her plot and also endorsed Sun-Tzu, he was unanimously voted into the office of First Lord. As such, he is often referred to by most Capellans as the "Defeater of the Clans" despite his role being largely ceremonial.

In his final year as First Lord, Sun-Tzu decided that the time was ripe for the Confederation to reclaim its lost glory, and started a phenomenal movement known as Xin Sheng ("New Birth") throughout the Confederation. Having gained the trust of the Magistracy of Canopus by aiding them against the Toyama Faction of the Word of Blake and gaining the trust and affections of its young heiress, Naomi Centrella, Sun-Tzu instigated the Capellan-St. Ives War to regain the lost St. Ives Compact (a pro-Davion state ruled by his aunt, Candace) by having an agent implanted within one of the Compact's BattleMech regiments, the Blackwind Lancers. The Lancers attacked a Confederation border world during the Chancellor's tour of bordering planets along with Isis. Isis was separated from Sun-Tzu only to be rescued by members of the Confederation's Warrior House Hiritsu. Declaring this attack an act of war, Sun-Tzu began his assault on the Compact, along with his Canopian allies. Everything seemed to be working out just the way the Chancellor had planned.

However, the war hardly went the way Sun-Tzu had imagined it, partly due to the Chancellor's refusal to concentrate solely on the St. Ives conflict. Rather, he chose to fight on two fronts with his forces reclaiming worlds in both the Chaos March and the St. Ives Compact:

In spite or anger, Sun-Tzu also broke off his ten-year engagement with Isis Marik, sending her away, despite the fact that Isis did truly love him. She would later appear at Victor Steiner-Davion's side and would eventually marry him.

Opposition also appeared in the form of Star League forces, Federated Commonwealth units, elements of the Com Guards, the Free Capella movement led by his uncle Tormano and the newly SLDF Nova Cats. It was clear that Victor Steiner-Davion, acting as Precentor Martial of the Com Guards and commander of the SLDF, was not about to let Sun-Tzu have his way. Also, the deadly deep strikes of the 1st St. Ives Lancers led by Duke Kai Allard-Liao continued to hurt the Confederation. But these weren't the only problems that plagued the Chancellor. His greatest nightmare would nearly destroy the dreams of his newly reborn Confederation. 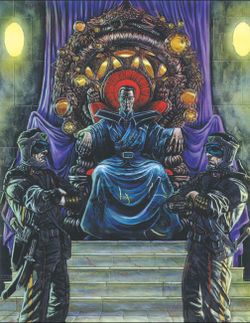 Sun-Tzu's younger sister Kali Liao was the head of the death-worshiping Thuggee cult. Much like Romano had been before, Kali was insane and had often been a cat's paw in many of Sun-Tzu's machinations. The St. Ives conflict proved no different when Kali unleashed a massive nerve gas attack on several St. Ives worlds. With the Kentares Massacre and the Turtle Bay incident fresh in his mind, Sun-Tzu feared that the other Great Houses would use it as a rallying call against his Confederation. Quickly he liaised with his aunt Candace and pulled as many resources as possible from the war to deal with the Thuggee. The damage had been done, however, with the gas attacks claiming the lives of thousands, including Tormano Liao. The incident damaged the Confederation's already fragile image, forever known as Black May.

The Trinity Alliance and victory[edit]

The war resumed shortly after the Black May attacks and Kali's trial in the Free Worlds League, but it became more erratic and brutal. Seeking to bring the war to a swift end, Sun-Tzu sought the aid of another Periphery state, the Taurian Concordat, who bore a grudge against House Davion. With the promise of power and opportunities being offered by the Confederation, the Protector Grover Shraplen agreed to form what Sun-Tzu named the "Trinity Alliance". Utilizing the resources of all three states, Sun-Tzu was finally able to deal the crushing blow to the Compact by taking the capital world of St. Ives, ending the bloody two-year conflict that had claimed the lives of too many Capellans. The Confederation was whole again and, more importantly, the Capellan people felt strong again, no longer like the nation that Hanse Davion broke in the Fourth Succession War. Xin Sheng had finally been realized to its fullest.

Sun-Tzu would continue to be active in Inner Sphere politics, helping the Taurian Concordat gain membership to the Star League. During the FedCom Civil War, he pledged his support for Victor Steiner-Davion but this was simply a means for him to solidify his grip on a former Capellan world in FedCom territory, Tikonov. During the Word of Blake Jihad, Sun-Tzu led his Confederation in a war of survival against the Blakists, nearly alone, save for its only allies, the Canopians, before Devlin Stone came to aid them.

It was said that during his later years, he suffered from many physiological and psychological symptoms. Though many attempts were made to discover what sickness or ailment Sun-tzu might have had, it remained a medical mystery. His so called wasting disease was known to show as: sudden muscular atrophy (weakness and/or wasting in muscles), osteoporosis (weakness in bones to the point where they break easily), macular degeneration (weakness in a person's central vision), and decreased reflex response. Additionally he showed increased irritability, mild paranoia, and extreme introversion. In 3119 a Case Study was presented in the Luxen Journal of Medicine, Vol. LXVIII that Toxoplasma gondii hardcorea could have been a cause.[5]

Apparently, he would die on Liao decades later in 3113 during "The Slaughter of Liao" or, as Capellans remember it, as "The Night of Screams," when he supposedly ascended to godhood. [6] Sun-Tzu is remembered as a dangerous enemy, a shrewd politician on par, if not greater than, Katrina Steiner. Unlike Victor Steiner-Davion, who was more respected for being active on the battlefield, Sun-Tzu was respected for his unpredictable cunning, able to play the role of a fool in one moment and that of an implacable foe in the next. He gave the Capellan people their pride back and rebuilt a nation on the verge of collapse and is forever remembered by Capellans as the Celestial Wisdom, Father of the Capellan State.

In reality, Sun-Tzu is not totally dead, not even in 3134, at least. During the "Night of Screams", he returned to Liao to die, his last act to strengthen the Confederation. But in reality, he puts himself in a cryogenic coffin, to prevent dying. Thus, the Cult of Liao was born. His cryochamber, inside an underground bunker, was kept operative and protected, in secret, by an elite band of the Ijori Dè Guāng, the pro-Capellan resistance.[7]

Nobody can revive Sun-Tzu, and it is unknown if his brain had suffered damage. Mai Uhn Wa, the founding leader of new Warrior House Ijori, discover this secret and informs Capellan officers about this. They seized the bunker and start the process to take the coffin to Sian... but before they can do it, the Cult recovers the body and take him out. It is implied that Evan Kurst, leader of the Cult, and second in command of Warrior House Ijori, plans to put the coffin under the newly constructed headquarters of his base.[8].

He married the Canopian heir, Naomi Centrella, on the 13th of October 3070[9][10] and was also the father of Chancellor Daoshen Liao and Magestrix Ilsa Centrella.

Danai Liao-Centrella was officially passed off (even to herself until she was in her late twenties) as Sun-Tzu Liao's third child, to cover up the fact that her true parents were indeed Sun-Tzu's two children, Daoshen Liao and his sister Ilsa Centrella. Danai was raised on Canopus by her aunt Erde Centrella as her mother had little interest in her. 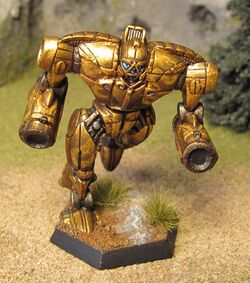 Though never famed for his battlefield prowess, Sun-Tzu was publicly known to pilot an Emperor as his personal BattleMech. Sun-Tzu piloted his Emperor when he and his Death Commando bodyguards, along with Danai Centrella, reinforced Marcus GioAvanti and the Avanti's Angels mercenary unit on Astrokaszy. The sudden appearance of the Capellan and Canopian BattleMechs caused the opposing forces to immediately flee the battlefield.[12]

Sun-Tzu would take advantage of his personal 'Mech's reputation during the Word of Blake Jihad, when during the second Blakist incursion on Sian he sent one of his bodyguards to pilot it into combat, providing his troops with a morale boost without risking himself.[13]

During his "last battle" in 3113, Sun-Tzu, or something posing as him, piloted an Emperor entirely electroplated in burnished gold.[14].

During his time training on Outreach, he used a Cataphract.[15]